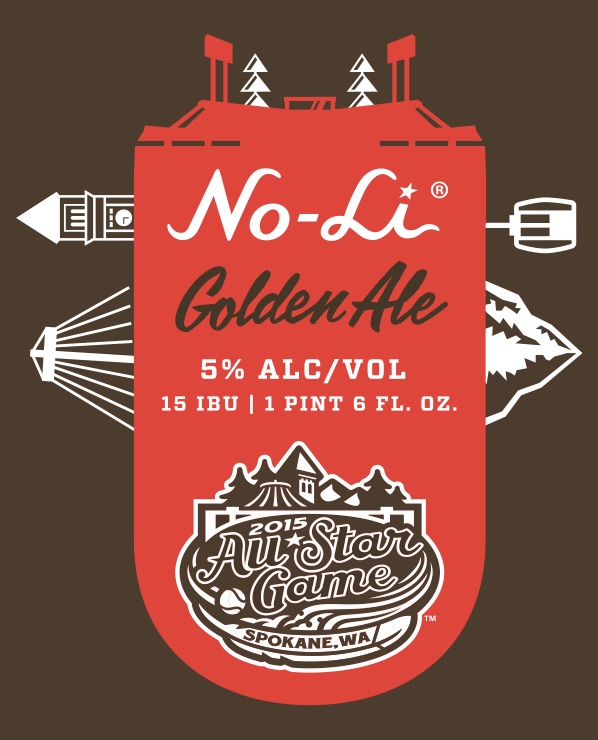 We here in Portland have our very own beer for our local MiLB team with BridgePort Long Ball Ale for our Hillsboro Hops. Now Spokane based No-Li Brewhouse is now joining this “club” with its own beer for the upcoming MiLB Northwest League vs. Pioneer League 2015 All-Star Game.

For the first time in history, the MiLB Northwest League will go head-to-head against the Pioneer League in the 2015 All-Star Game. The setting for this epic battle on August 4th is none-other-than Avista Stadium – the home of the Spokane Indians Baseball Club. In celebration of this momentous occasion, the ball club and No-Li Brewhouse have partnered up to create the limited release No-Li All-Star Game Golden Ale.

“We wanted to do something special with a local partner for the All-Star Game” said Spokane Indians Base Ball Club Senior VP, Otto Klein. “No-Li was an obvious choice and they have really stepped up to the plate. We’re excited to be the first host city of the Northwest League/Pioneer League All-Star Game and to be able to share this unique collaboration with our fans this summer.”

“Spokane Indians Baseball is an organization with a rich history, deeply rooted in our city. With so much of who we are at No-Li coming from our love of Spokane and the sense of pride we feel for being a part of this community, a partnership with the ball club made perfect sense,” says No-Li Sales & Marketing Manager, Callet Ioane. “Their organization has brought the likes of Tommy Lasorda, Carlos Beltran and Joey Cora to Spokane. Who wouldn’t be honored to be a part of that legacy?”

The special edition No-Li All-Star Game Golden Ale will be sold in select locations throughout Spokane. Set to ship on June 16th, bottles will hit the shelves just in time for the All-Star Fan Vote to begin. Details on how fans can help decide who takes the field for the big game are available on each commemorative bottle, as well as at spokaneindiansbaseball.com.