Award-winning Portland brewery releases summer seasonal in celebration of 42nd anniversary, to be available in Portland and Southwest Washington

It was 1974, the Grateful Dead played the Portland Memorial Coliseum, the Rubik’s Cube was invented, and Blazing Saddles was the number one movie. It was an era of simple pleasures and self-identity, and in the midst of it all, Old Town opened its doors for the first time in Portland’s China Town neighborhood. In a celebration of the Old Town’s 42nd anniversary, the brewery is releasing a bold and full flavored tangerine summer ale that plays to the spirit of the seventies.

Brewed with tangerine peel, hibiscus, and New Mexico green chili, the beer is crisp, fresh and balanced with just enough bite to keep you on your toes.  In order to extract the delicate flavors and aromas from these ingredients, it was chosen to add them directly to the beer in cold storage.  This takes longer to make the beer, but drinkers will agree, it’s worth the extra time.  The slow aging allows each ingredient to intermingle with the others, while also allowing each flavor to stand out on its own. 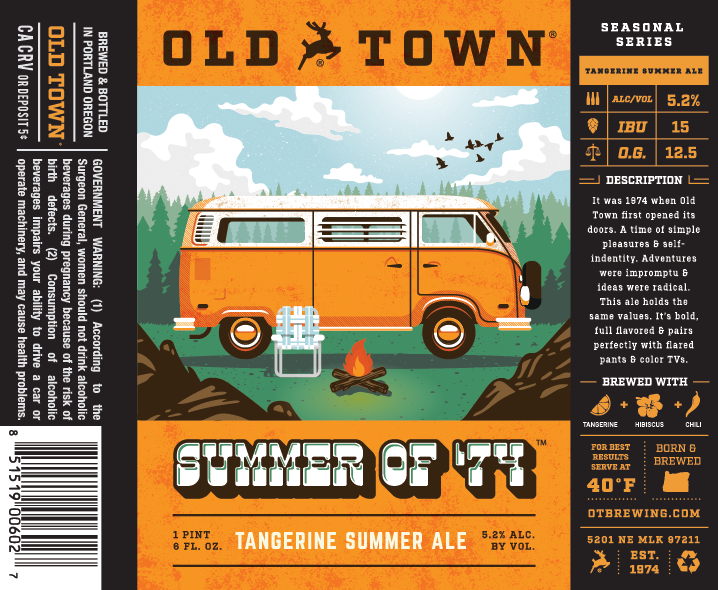 Summer of ‘74 is 5.2 percent ABV, 15 IBU and O.G. of 12.5 – the brewers at Old Town suggest this beer is best enjoyed at 40 degrees Fahrenheit. The brew pairs easily with sunshine and backyard BBQs, Farrah Fawcett flips and flared jeans, and The Loco-Motion bumping in the background.

In honor of the beer’s release and 42nd anniversary Old Town will be hosting a party at the original location, 226 NW Davis Street on April 14, 2016 beginning at 6 p.m. In addition to releasing Summer of ’74, throw back pricing on food specials will be offered, a live DJ will be spinning hits from 1974, and the head brewer will be available for hosted tastings, among other things.

Summer of '74 Release from jordan wilson on Vimeo.

“Any new beer release is exciting, but this particular release is one we’re especially enthusiastic about,” said Old Town owner Adam Milne. “Summer of ’74 is a tribute to our beginnings, a celebration of where we started and where we are today – it’s a truly of an amazing milestone for our team. We’re grateful to share in this moment with the Pacific Northwest, and pleased to give beer drinkers a pint of nostalgia all summer long.”