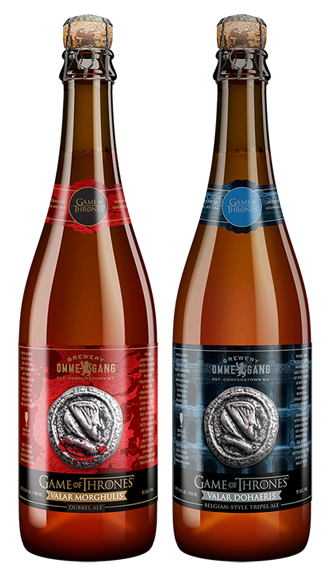 (COOPERSTOWN, NY) After an exciting season that saw the Starks reclaim the North and Cersei take the Iron Throne as the first queen of Westeros, Brewery Ommegang and HBO Global Licensing are introducing a new beer and bringing back a previous brew to steady the nerves of fans as they anxiously endure the show’s off-season break. Valar Dohaeris Tripel Ale is the latest beer in the series and pays homage to Arya’s season-long struggles within and around the House of Black and White. This beer will be available in 750ml single bottles, on draft and also paired alongside its previously released sister-brew Valar Morghulis in a collectible gift pack which features a commemorative glass as well. Suggested retail price is $9.99 for the individual bottles and $22.99 for the gift pack. The official nationwide release to retailers is October 10.

Fans of Game of Thrones know that “Valar Morghulis” means “All Men Must Die” in High Valyrian and is traditionally answered with the phrase “Valar Dohaeris,” which means “All Men Must Serve.” Label art for both bottles features the two-headed coin, given to Arya Stark by Jaqen H’ghar, which gained her passage to Braavos at the end of Season 5. Arya spent most of Season 6 in Braavos training to become a faceless assassin, making the naming of the latest beer and the decision to re-release Valar Morghulis a no-brainer.

“When we got a sense of the season’s key plot points, we knew right away Valar Dohaeris was the new beer name and that bringing back Valar Morghulis was a must,” says Bill Wetmore, General Manager and Marketing Director for Brewery Ommegang. “And I think HBO’s fantastic idea to have the gift pack mimic the House of Black and White is really going to be a hit with fans. It looks killer and I think fans are going to scoop them up pretty quickly for gifts or for their own collections.”

“Of the classic Belgian styles, the dubbel and the tripel are two of our favorites to brew, and both are styles we’re particularly well known for,” says Ommegang Brewmaster Phil Leinhart. “I love the idea of releasing them together side-by-side. It is such a great way to experience them.  They are also pretty hearty and should age nicely over time, so fans can stock up to last them through the winter and to fill the void until next season.”

Originally released in 2014, Valar Morghulis Dubbel Ale is a name and style selected by fans in a December 2013 social media poll. One of the fastest-selling beers in the series, fans enjoyed this classic Belgian-style because it is fairly complex and full of intrigue – much like the show itself. Valar Dohaeris Tripel Ale is, much like a “faceless man,” not what it first appears to be; it shares the complexity of its sister-brew and a strength masked and belied by its lighter color.

Valar Morghulis is 8% ABV, brewed with pilsner and specialty malts and hopped with Apollo and Hallertau Spalt Select hops. The hue is deep amber-brown and aromas include caramel, toffee, ripe fruit, banana and slightly burnt sugar. The taste is well-balanced with rich malty sweetness, caramel and sugar, and just a touch of bitterness to balance. The finish is surprisingly dry and light on the tongue, a surprising counter to its aroma and initial taste.

Valar Dohaeris is 9% ABV, brewed with pils, wheat and oats, flaked barley, and hopped with noble hops. It pours a beautiful copper-tinted hue with a full, fluffy white head. Sweet grain and honey are prevalent in the aroma. The flavor opens with a bright sweetness thanks to the Belgian candi sugar used in brewing. The finish is moderately dry and effervescent with just a hint of Belgian yeast character.

About Brewery Ommegang
Brewery Ommegang opened in 1997 to brew imaginative craft beers across a variety of styles, with particular emphasis and respect for Belgian brewing traditions. Ommegang brews nine ales year-round, as well as an extensive and innovative range of seasonal and specialty ales. The beers have won a national following by connoisseurs of fine beer and are distributed in 46 states and internationally. Ommegang is located on a 136-acre farmstead in Cooperstown, New York and offers free daily tours and inexpensive tastings as well as a 100-seat café, a well-stocked brewery store, and an annual calendar of public events including a summer concert series and a legendary beer festival, Belgium Comes to Cooperstown. Ommegang is open every day of the year except for Thanksgiving, Christmas Day, and New Year’s Day. For more information, contact info@ommegang.com, call 1-800-544-1809, or visit www.ommegang.com. Ommegang is a member of the Duvel family of fine beers. Follow Ommegang on Twitter: @BreweryOmmegang, Facebook.com/Ommegang, and Instagram: @BreweryOmmegang

About HBO Global Licensing
HBO Global Licensing officially licenses the HBO® brand for the development and merchandising of innovative product lines inspired by the network’s award-winning programming. With products created around hit series like Game of Thrones® and True Blood® as well as classic series like The Sopranos®, Sex and the City®, and Entourage, items include fashion apparel, figures, jewelry, digital and CD soundtracks, prop and costume replicas, games, books, and beverages, as well as exclusive, premium collections in partnership with upscale, designer brands. Merchandise can be purchased in retail stores nationwide, at http://store.hbo.com, and at the groundbreaking HBO retail hub, the HBO Shop®, located at 42nd and 6th Avenue in New York City. HBO Global Licensing products are also sold internationally across Europe (www.hboshopeu.com), Asia and Australia.