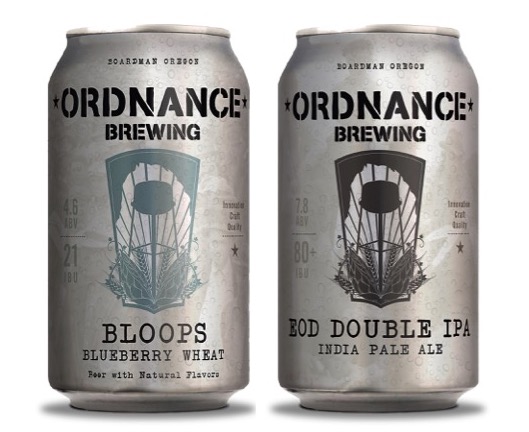 “We have been really happy with the growth of both beers. EOD is a reasonably priced, easy-drinking, delicious Double IPA and is prime for the single serve format.” noted Ordnance Managing Partner, Craig Coleman. “Bloops Blueberry Wheat keeps surprising us with steady growth across the Pacific Northwest because it is well balanced. Not too sweet or fruity. A delicious wheat beer with just enough blueberry aroma and flavor.”

The can design, created by Chris Noud of Now Design in Salem, Oregon. It echoes the current bottles with historic images of the World War 2 support effort that took place at Ordnance, Oregon are screened in the background. Those seeking key details will find the ABV and IBU up front.

“We’ve carried the original label design forward to be sure people know it is us and the beer they are seeking,” noted Ordnance Director of Marketing, Dewey Weddington. “We’ve always taken the approach that the brewery comes first and then the beer. This design follows that format while establishing a clear identity for the beer.”

BLOOPS, BLUEBERRY WHEAT
Brewed with blueberries from our local farms, Bloops is a balanced wheat beer with just enough blueberry aroma and flavor to provide something delicious without being sweet and overly fruity. Bloops has grown from being a seasonal to a core beer due simply to heavy customer demand.
ABV: 4.5 IBU: 21
Malt: PNW White Wheat, PNW Pale Ale, Dextrapils, Caramel Wheat
Hops: Nugget, Cascade
Flavor: Proprietary blend and process.

EOD DOUBLE IPA
Our take on a West Coast IPA.  Crafted with generous  additions of classic hops, including Mt. Hood and Columbus, at every step in  the brewing process. While the hops are hard to miss, it is full of flavor, ranging from  a light fruity sweetness to rich floral tones.  Add in a higher ABV and this is a hop bomb of desire for sure.
ABV: 7.8 IBU: 80+
Malt: PNW Pale Ale, PNW White Wheat, Aromatic
Hops: Magnum, Nugget, Columbus, Mt. Hood, Cascade

Founded in 2014, Ordnance Brewing is located in Boardman, Oregon. There in Oregon’s Columbia Plateau, Ordnance operates a 50 barrel brew system with capacity to brew  to produce an expansive set of experimental beers and a core set that includes RX Pale Ale, Kolsch, EOD Double IPA, Bloops Blueberry Wheat and FMJ IPA. Ordnance Brewing is farmer owned and managed by Craig Coleman who has been farming in Oregon since he was twelve years old. The brewery maintains taprooms in Boardman and Wilsonville, Oregon.