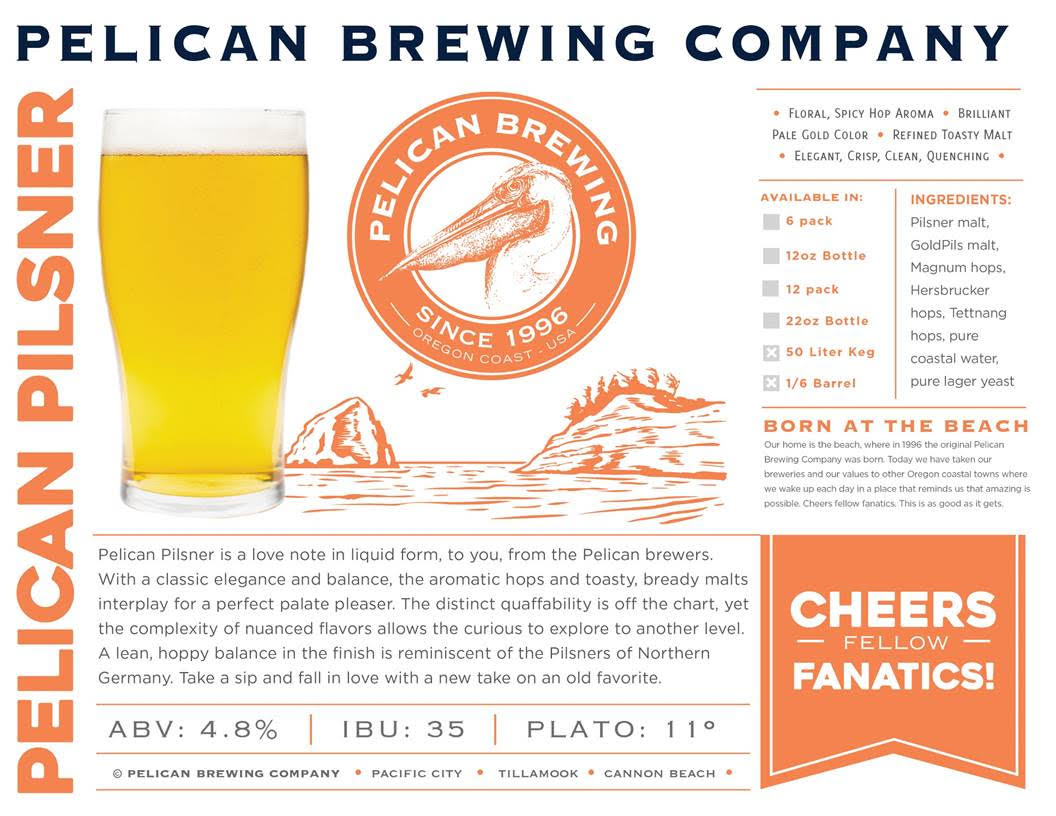 Pacific City, Oregon (March 13, 2019)—Prost! Pelican Brewing Company this week releases Pelican Pilsner, a tasty German-style Pilsner that joins the year-round lineup of Pelican classics. The beer is available now as a draft-only delight at all Pelican brewpubs and other participating watering holes.

Pelican Pilsner is a passport to tradition from the Pelican brewers. With a classic elegance and balance, the aromatic hops and toasty, bready malts interplay for a perfect palate pleaser. The distinct quaff-ability is off the chart, yet the complexity of nuanced flavors allows the curious to explore to another level. A lean, hoppy balance in the finish is reminiscent of the Pilsners of Northern Germany. Take a sip and fall in love with a new take on an old favorite.

“Making a great Pilsner is like brewing in a Speedo—there is nowhere to hide any flaws!” says Darron Welch, founding brewmaster, Pelican Brewing Company. “The flavor and balance of a great pilsner is what makes it special—combining depth of flavor and character with refreshing drinkability is a real balancing act, one that requires the highest level of craftsmanship.”

Welch continues to be one of the most decorated brewers in the Pacific Northwest, earning well over 450 medals including several Gold last year alone at the World Beer Cup, Australian International Beer Awards and North American Beer Awards.

“Pelican Pilsner is fantastic—soft where it is supposed to be, round and just a proper bitterness,” says Rick Sellers, Summit Beverage. “It’s a clean, easy beer—what a Pilsner should be. Cheers!”

Like all Pelican beers, Pelican Pilsner is born at the beach by a team of award-winning craft beer makers known for brewing styles of beer that they themselves love to drink.

“Regardless of the season, there are always occasions that are perfect for a flavorful, well-made Pilsner beer.  That’s why we’ve added Pelican Pilsner to our year-round line-up of draft beers,” says Welch.