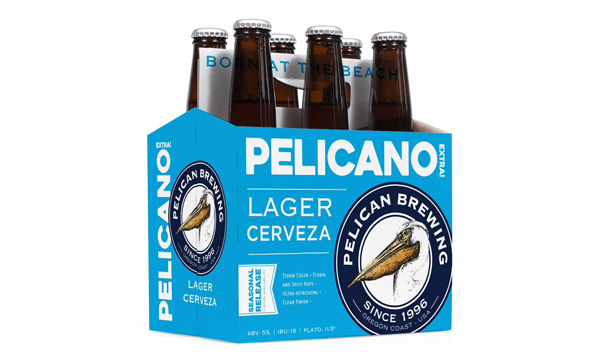 Pelicano EXTRA!, which won a Gold Medal at the North American Beer Awards this month, is brewed with 6-row malt and 25% flaked corn to give the beer a crisp, dry flavor that is balanced with Tettnang hops for a subtle spicy and floral character. At 5.1% abv Pelicano is a sessionable lager with enough flavor and complexity that you can say adios to the lime and just enjoy! Pick up a 6 pack and you’ll find:

“Pelicano Extra! is a great summertime beer that bridges the gap between flavor and approachable drinkability. Clean lager characteristics let the wonderful malt and hop flavors shine through without any heaviness or harshness. Pelicano, which is full of character, refreshing, flavorful and smooth, pays homage to our beach roots,” says Darron Welch, award-winning brewmaster at Pelican Brewing Company.

Born at the Beach
Pelican was born at the beach 20 years ago as a small, stand alone brewpub in a small town on the Oregon coast—Pacific City.  Pacific City is still a small town, but with consistent growth and demand for its products, Pelican sales are up more than 500% from 3,500 barrels in 2013 to 18,000 barrels this year. The company recently doubled its brewing and bottling capacity at its Tillamook facility and opened a new brewpub in Cannon Beach. Pelican also recently won a bronze medal at the World Brew Cup℠ and eight medals including Champion Medium International Brewery at the Australian International Beer Awards.

Like all Pelican beers, Pelicano EXTRA! is also born at the beach by a team of award-winning craft beer makers known for brewing styles of beer that they themselves love to drink. Salud!