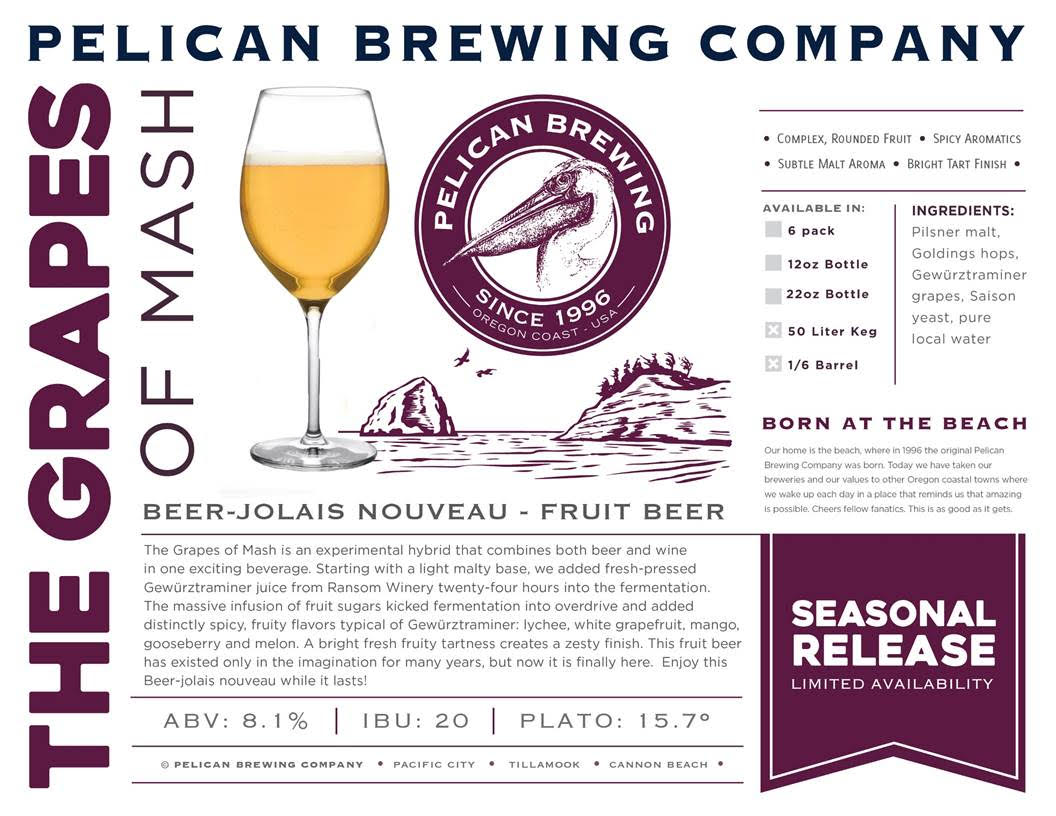 Pacific City, Oregon (November 8,2018)—Pelican Brewing Company celebrates the fall crush with the release of its first-ever beer made with fresh harvested Gewürztraminer grapes—welcome The Grapes of Mash Beer-jolais Nouveau. The experimental hybrid, which receives 55% of its extract from malt and 45% from the grapes, is a nod to the seasonal French Beaujolais Nouveau tradition and has been a longtime brainchild of Pelican’s founding brewmaster, Darron Welch.

The Pelican brewing team now introduces the exciting new seasonal beverage hailed for its complex, rounded fruit, spicy aromatics, subtle malt aroma and bright tart finish. The beer will be available in November on draft only at Pelican brewpubs and specialty retail partners.

“The Grapes of Mash is our vision of a completely new place to take beer—we’ve been percolating on this idea for years and after our first tasting we cannot wait to see what other creations emerge from this delicious concept,” says Welch. “This brew embodies elements of both beer and wine in a very harmonious way—we used a low hopping rate with pilsner malt to keep the beer simple and let the aroma and character of white wine shine through. It’s truly a beverage made for a wine glass!”

The Grapes of Mash started with a light malty base and then Pelican added fresh-pressed Gewürztraminer juice from Ransom Winery twenty-four hours into the fermentation. The massive infusion of fruit sugars kicked fermentation into overdrive and added distinctly spicy, fruity flavors typical of Gewürztraminer—imagine a combination of lychee, white grapefruit, mango, gooseberry and melon. Pilsner malt, Goldings hops, Gewürztraminer grapes, Saison yeast, pure local water combine for a bright fresh fruity tartness that creates a zesty finish. This fruit beer has existed only in the imagination for many years, but now it is finally here.

Like its namesake, Beaujolais Nouveau, which is a young red wine released annually on the third Thursday in November, Pelican’s exciting new Beer-jolais Nouveau will also be available on draft by November 15, 2018. Traditionally, the uncorking of Beaujolais Nouveau wine bottles in France is marked by parties, fireworks and other festivities—and because Pelican brewers are so stoked about this innovative new brew, they invite fellow fanatics to join them in celebrating the first-ever release of The Grapes of Mash.

“This is a beer unlike anything I’ve ever tasted before—it’s bright, brisk, fresh and remarkably different than other fruit beers I’ve had that are made with wine grapes,” says Welch. “I really think this flavor combination will intrigue a lot of our fellow fanatics and entice a few newcomers to Pelican.”

Welch continues to be one of the most decorated brewers in the Pacific Northwest, earning well over 450 medals including several Gold Medals this year alone at the World Beer Cup, Australian International Beer Awards and North American Beer Awards.

Like all Pelican beers, The Grapes of Mash is born at the beach by a team of award-winning craft beer makers known for brewing styles of beer that they themselves love to drink. Cheers!