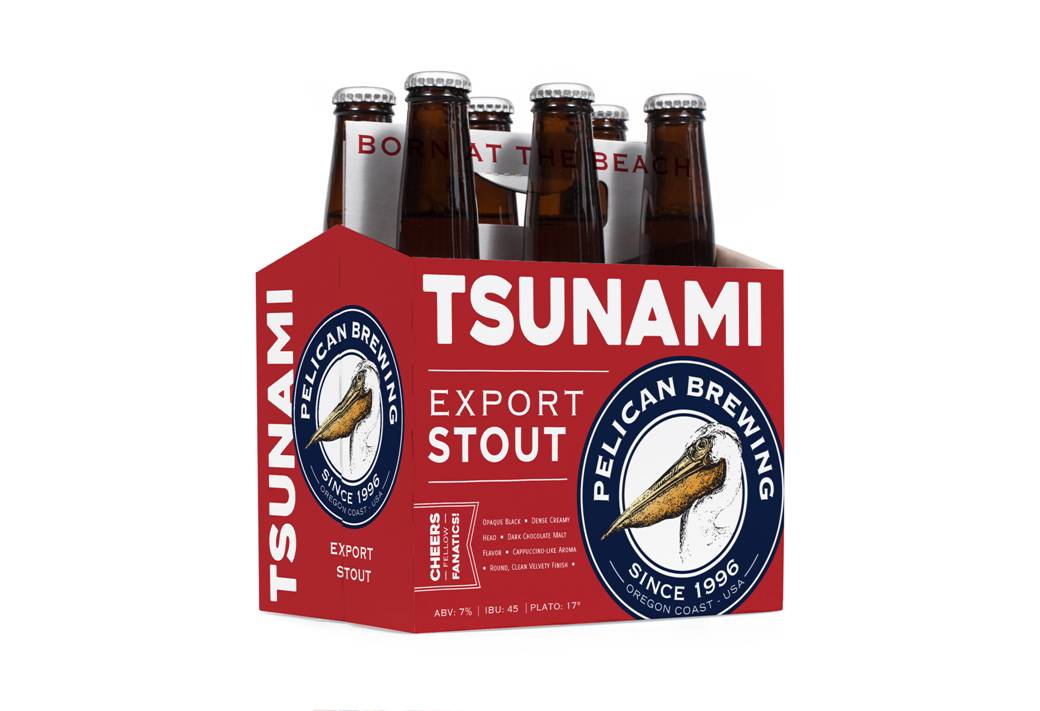 Pelican’s most-decorated beer fills a hole on the craft beer aisle with the January release of Tsunami export stout in 12 oz. bottles and 6 packs

Pacific City, Oregon (December 14, 2016)—Pelican Brewing Company cheers up January’s impending doldrums with the release of its most award-winning brew in 12 oz. bottles and 6-packs. Arguably the most decorated beer in the world Tsunami Stout is bound for smaller format bottles and will hit the craft beer aisle in January—just in time to cure those post holiday blues.

Like the force of nature it is named for, Tsunami bowls the beer drinker over with its jet black color and dark seductive aroma. Roasted malts and unmalted barley give this full-bodied brew its dense creamy head and distinct dark chocolate and cappuccino flavors that swell to a clean, rounded malty finish. Pelican encourages you to grab a Tsunami and head for higher ground.

To showcase the glory of the Mosaic hop, brewmaster Welch built a simple malt bill of two-row malted barley and a touch of malted wheat—then added loads of prized Mosaic hops. This minimalist approach lets the incredible tropical citrus hop aromas and sweet pine hop flavors come through with clarity and focus. On the finish, the clean bitterness is balanced by just enough malt character to ensure that the next sip is a foregone conclusion:

“We love brewing single hop beers because it allows us to discover and feature nuances of single ingredients that could become muddled when mixed into a recipe.  The challenge with single hop beers is they often lack balance and depth but with Darron’s uncompromising creativity and ability to create balanced, flavorful beers, he’s got another winner’” says Jim Prinzing, CEO, Pelican Brewing Company. “There’s a special character about Mosaic hops that cannot be replicated and we saw an opportunity to express it in a focused and unique way.  All that aside, the beer is also incredibly delicious!”

Born at the Beach
Pelican was born at the beach 20 years ago as a small, stand alone brewpub in a small town on the Oregon coast—Pacific City.  Pacific City is still a small town, but with consistent growth and demand for its products, Pelican sales are up more than 500% from 3,500 barrels in 2013 to 18,000 barrels this year. The company recently doubled its brewing and bottling capacity at its Tillamook facility and opened a new brewpub in Cannon Beach. Pelican also recently won a bronze medal at the World Brew Cup℠ and eight medals including Champion Medium International Brewery at the Australian International Beer Awards.