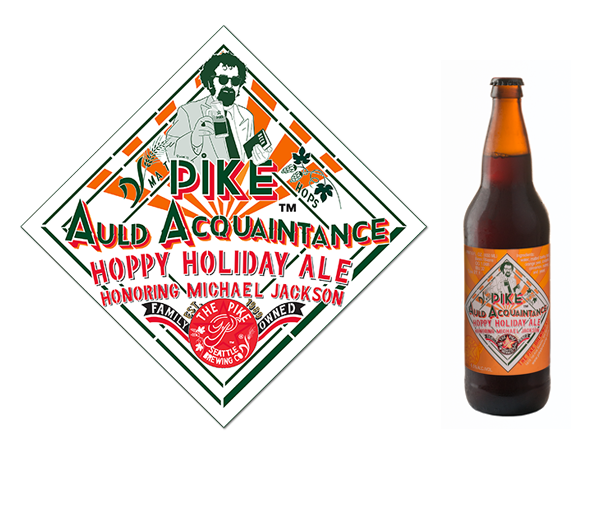 Seattle, WA, November 13, 2015: After one of the most stunning summers on record, the cold and dark of winter is finally returning to the Northwest. Sure, we all still enjoy an IPA, but with the longer nights our Cascadian tastes turn towards the fuller, darker and sweeter beers of winter. Now is the time for Pike Auld Acquaintance.

Pike Auld Acquaintance is a dark and toasty amber ale with refined spices brewed to complement holiday foods. This festive and flavorful seasonal beer has subtle spices and aromatic orange notes to please your nose and palate. Pike Auld Acquaintance is lower in alcohol than most winter warmers, so you can enjoy one or two during those long, northwest winter nights. Hoppy holidays from Pike Brewing Company.

2015’s Pike Auld Acquaintance label honors the venerable beer writer, Michael Jackson. An Englishman, Michael started writing seriously about beer in 1976 and wrote until the time of his death in 2007. He was passionate about introducing people to beers they had yet to try and many people credit him with rekindling interest in beer via his books, articles and TV show. Michael was also one Pike Brewing Founder and Owner, Charles’, close friends. He christened The Pike Pub as “a shrine to beer!”

Pike Auld Acquaintance is available now as a limited, seasonal release. You can find it in 22 oz. dinner bottles and on draft. Take a look here for stores, bars and restaurants that carry Pike Brewing Company beer.