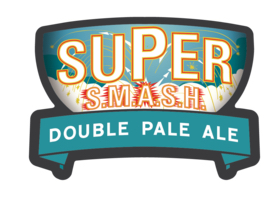 Similar to its pale ale cousin, Super S.M.A.S.H. features Goldpils Viena malts, known for their toasty flavor, and an extra heavy dose of bright, citrusy Simcoe hops. The result is a refreshing pale ale with a 7% ABV, slightly higher than the original 5.6%. “We were thrilled with how our S.M.A.S.H. beer turned out, so when it came time to think of a special beer for the Oregon Brewers Festival, the obvious choice was to double down on S.M.A.S.H.,” says head brewer Ryan Pappe. “It is still a single malt, single hop beer, but we raised the original gravity to boost the alcohol, while increasing the hops to keep pace.”

Super S.M.A.S.H. makes its debut exclusively at the Oregon Brewers Festival from July 22-26 at Tom McCall Waterfront Park in downtown Portland. When the festival ends, you’ll be able to find this small-batch beer on tap at select Portland-area pubs, growler stations, restaurants and Portland Brewing’s Taproom for a limited-time. In addition, discover all the Portland Brewing events happening during July’s Oregon Craft Beer Month here.