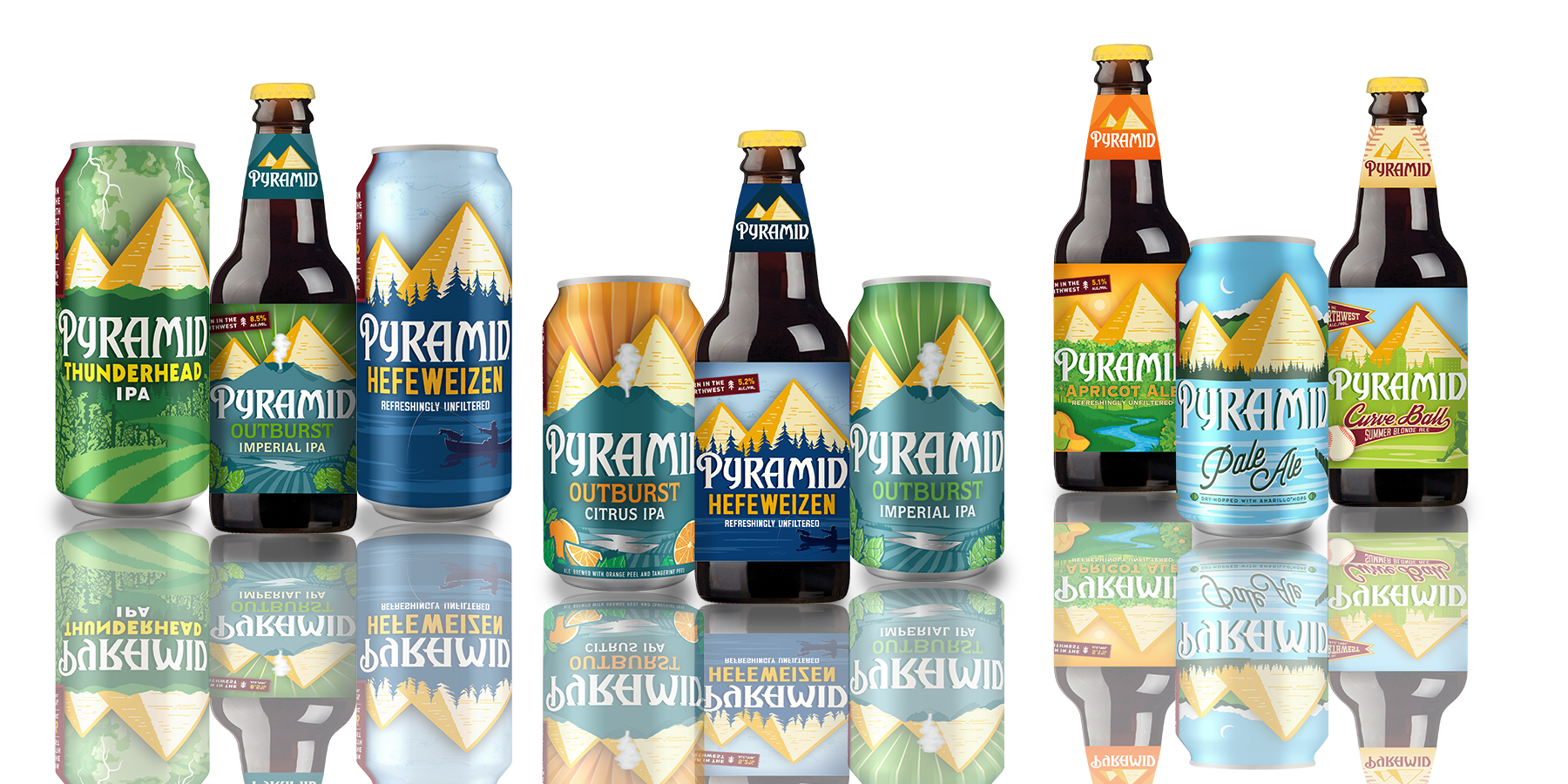 The new branding for each beer is pictographic and shares the story of its ingredients by paying homage to iconic Pacific Northwest (PNW) sceneries with a bold color aesthetic. For example, Outburst Imperial IPA’s new label art celebrates the iconic Mt. St. Helens near the brewery’s founding home in Kalama, Wash. and Hefeweizen celebrates classic Pacific Northwest scenery of a tree-lined mountain lake. The bottom of 6-pack carriers will have a call-out to fans to share their adventures with Pyramid. Whether exploring mountain lakes and coastal beaches, walking orchards in Hood River County Fruit Loop, smelling the aroma of hop fields in Yakima and Willamette Valleys, or sipping brews at Pyramid Alehouse before a baseball game, these scenes honor the region’s beautiful surroundings and represent Pyramid’s brand ideals of adventure, curiosity and discovery.

Pyramid Brewing Co. was founded in the PNW because of amazing resources like glacial water runoff and flavorful hop varieties produced in our two backyards of Yakima and Willamette Valleys. There is an incredible amount of inspiration to brew and enjoy craft beer, and after three decades of brewing some of the area’s favorite ales and lagers, Pyramid is a significant piece of many people’s favorite experiences.

Today, the craft beer industry is producing a lot of amazing beer, and it is harder to stand out on high-quality liquid alone. Recognizing this, Pyramid is embracing its legacy and original purpose to inspire adventure and exploration. This is evident in Pyramid’s evolving brewing philosophy and portfolio for current beer drinkers. Moreover, Pyramid is reaffirming its commitment to explore, celebrate and preserve the best of PNW ingredients and the land that produces them.

“Pyramid’s core element is celebrating life’s everyday adventures,” said General Manager Robert Rentsch. “We found that creating great beer is a given in today’s industry, but what’s next? For us, it is Pacific Northwest pride, seeking the best local ingredients and encouraging our consumers to enjoy their passions with craft beer. We are here to inspire those moments with fantastic beers worth sharing, and to introduce new styles of beer along the way.”

As part of the rebrand, Pyramid will release canned beers for Thunderhead IPA, Hefeweizen, Outburst Citrus IPAand Outburst Imperial IPA. These canned brews are ideal for PNW outdoor activites as they pack easier and chill faster. The novel Outburst Citrus IPA brewed with orange and tangerine peel debuts in 12 oz. cans and 22 oz. bottles. It’s big hop flavor is matched flawlessly by the tasty, aromatic, citrusy punch of the orange and tangerine peel.

“Inspired by the original Outburst recipe, Outburst Citrus IPA uses much of the same malts and hops to be mouth wateringly hoppy,” said Head Brewer Ryan Pappe. “We added orange and tangerine peel to augment the flavor profile with citrus fragrance. Outburst Citrus IPA is an excellent brew to get better acquainted with us when there is so much new to see, taste, smell and love about Pyramid!”

Pyramid’s baseball favorite, Curve Ball Summer Blonde Ale, returns to the seasonal brew line-up with new label art that embeds Seattle’s skyline with classic baseball and stadium images into the design. This blonde ale is brewed with the grandstand atmosphere in mind to be bright, crisp and golden. Supremely satisfying and deeply quenching, Curve Ball is a grand slam for summer’s adventures inside and outside the stadium.

About Pyramid Brewing Co.
Born in the Pacific Northwest, Pyramid Brewing Co.’s year-round ales, seasonals and Brewer’s Reserve series are some of the PNW’s favorite brews. In 1984, Pyramid discovered a new way of crafting beer, bringing together adventure, friends and bold new flavors and innovation. Today, Pyramid shares this spirit through its craft beers, and breweries and alehouses in Seattle and Portland. To find your Pyramid, visit: www.pyramidbrew.com.