The latest brewery to join in on the New England style IPA phenomenon is one of the oldest breweries from the Pacific Northwest. Redhook Brewery has just released its Bicoastal IPA, an IPA that combines the current trend of a hazy New England IPA with the tried and true west coast IPA.

With its history dating back to 1981, Redhook Brewery has brewing operations on both coasts in the United States, now in Portland at Widmer Brothers Brewing after its Woodinville, WA brewery has ceased operations and in Portsmouth, New Hampshire. Aptly named, Bicoastal IPA is a beer that the brew team at Red Hook is very excited about.

“Bicoastal is inspired by the IPAs coming out of New England, but with a little bit of a west coast twist,” said Nick Crandall, Redhook Innovation Brewer, in a press release. “Given that we have a brewery in New Hampshire, we really had to nail this one. Bicoastal has the signature hazy appearance and a really smooth mouthfeel with a huge tropical fruit aroma. Then we gave it a dank dry hopping synonymous with a west coast IPA.”

Bicoastal IPA will be available exclusively in Seattle as part of the Redhook Limited Release Series, which is said to be inspired by the counter culture of the city: music, water, mountains, art, coffee, and design. Each beer in this new lineup will feature original artwork from local Seattle area artists. Derek Vander Griend created the artwork for Bicoastal, featuring the legendary sea creature, the kraken. 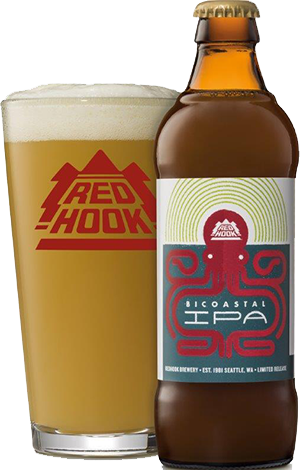 To help launch Bicoastal IPA Redhook is promoting a weeklong series of events during the week of July 19 in Seattle. The event schedule is as follows:

Meet the Brewer and Bicoastal Tasting at The Beer Junction
When: Tuesday, July 18, 2017
Where: The Beer Junction in West Seattle
Time: 5-8pm
Details: Come check out Redhook’s newest IPA and meet Brewer Nick Crandall in the process. Nick will be on hand to talk with guests about everything from Bicoastal to Redhook’s new Capitol Hill Pub and an exciting slate of collaborations in the works to kick off the pub’s opening.

Sounders Watch Party
When: Wednesday, July 19, 2017
Where: Tavern 12
Time: 6:30pm
Details: Come check out Redhook’s all-new Bicoastal IPA and watch the Sounders take on D.C. United. Tavern 12 will be raffling off Sounders & Redhook gear, and tickets to the next home game on 7/23.

Meet the Brewer and Bicoastal Tasting
When: Friday, July 21, 2017
Where: Tavern Hall in Bellevue
Time: 5-8pm
Details: Come check out Redhook’s newest IPA and meet Brewer Nick Crandall. Nick will be hand to talk with guests about Bicoastal IPA, Redhook’s new Capitol Hill Pub, and Crandall’s exciting slate of collaborations in the works to kick off the pub’s opening.

Pregame with Bicoastal
When: Sunday, July 23, 2017
Where: Lodge
Time: 5-7:30pm
Details: Redhook will be pre-gaming with Bicoastal IPA! Lodge will be raffling off Sounders & Redhook gear, and tickets to the Sounders home game on 8/12 vs Sporting KC.

Also on the horizon is the opening of Redhook Brewery’s new 10-barrel brewpub in the Capitol Hill neighborhood of Seattle. It is scheduled to open in August 2017.