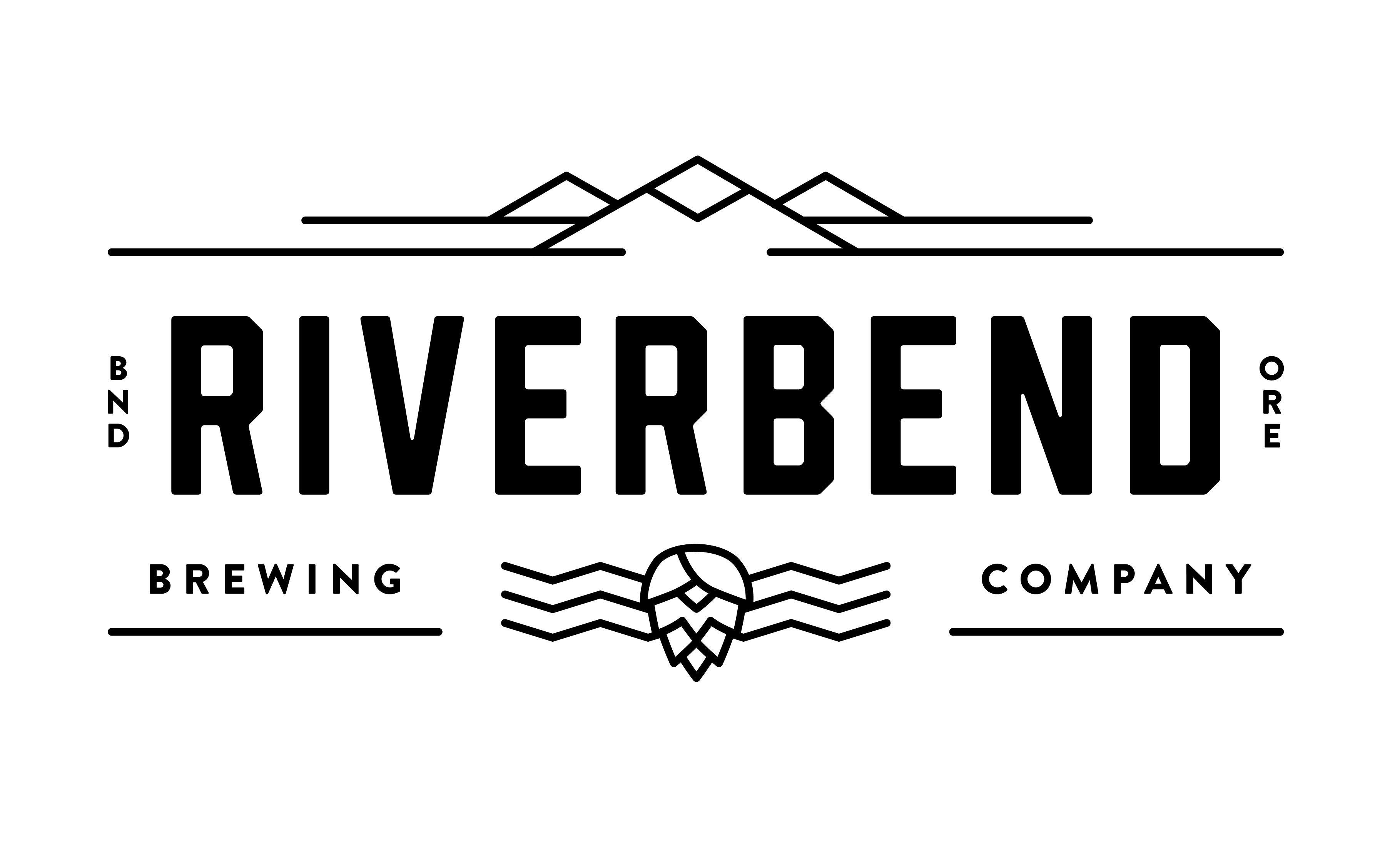 Press Release: Riverbend Brewing, known for an eclectic mix of milkshake IPA’s, clean West Coast IPA’s like Oregonized Love, and plenty of rotating draft beers is releasing two new brews available in 16oz cans and on draft.  The start to a rotating series of unique one offs, classic styles and fun mash ups; Blunder Armour IPA, and Fudge Me Berry Hard raspberry imperial porter will be hitting the market soon.

Blunder Armour IPA is a collaboration beer with Cascade Armory, a small independent clothing company based here in Bend, Oregon.  Being good friends with the brewery we were saddened to learn that the corporate giant Under Armour has sent multiple cease and desists to this family owned clothing company in what they are absurdly calling brand confusion.  In an effort to help with their building legal fees we brewed a highly hopped West Coast IPA, with portions of the proceeds going to their expensive legal battle.  Bright, juicy, tropical, with a touch of dankness, this 7% beer is both crushable and potent.  With a twist, and fun way to experiment we will be trying with every batch a slight change to the recipe for a way to keep things interesting and allowing us to explore new techniques.  Expect every unique batch’s bottom of can to have a unique word identifying that it’s different from another. 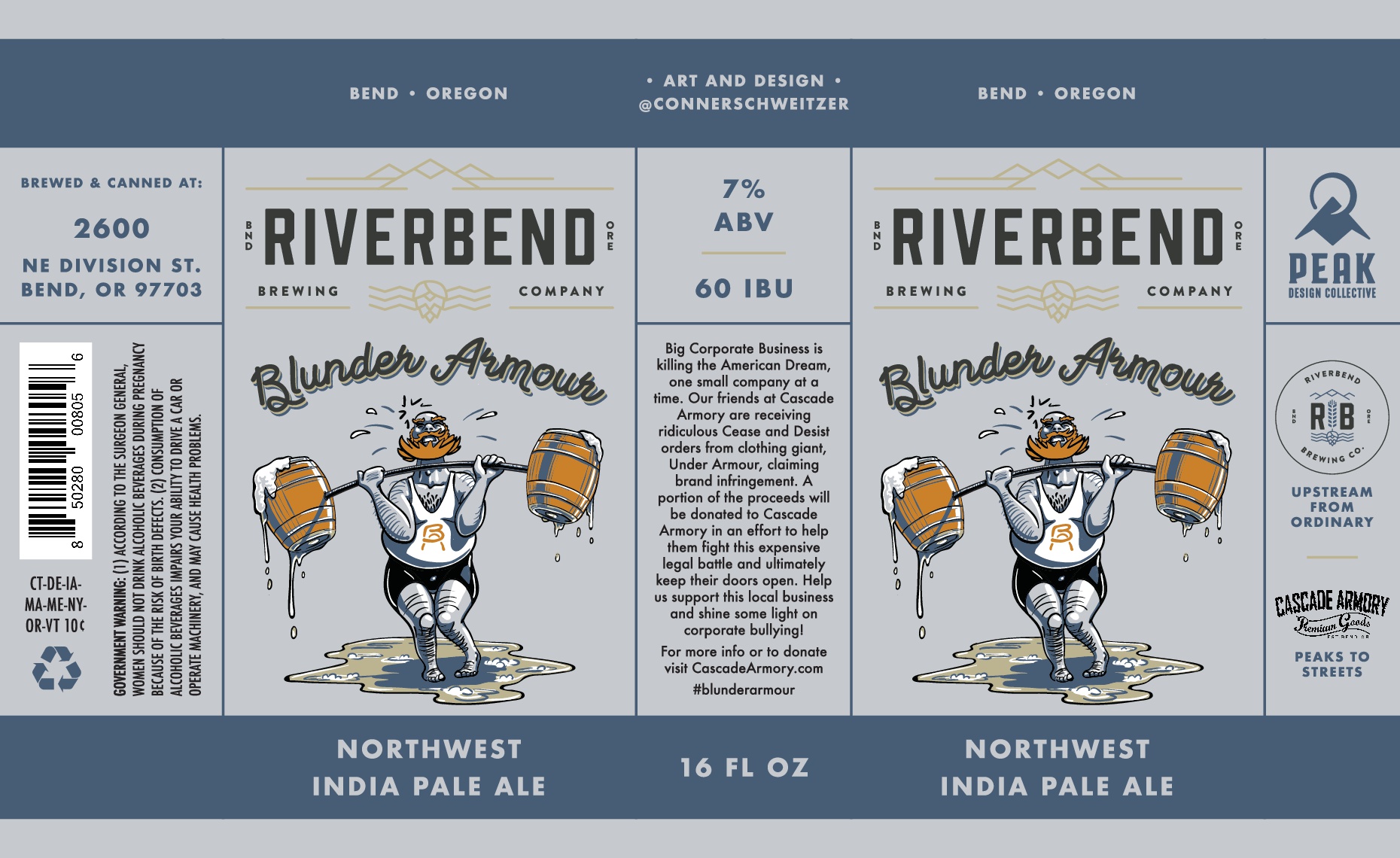 Even though spring is here, doesn’t mean the dark beers should disappear.  Fudge Me Berry Hard (yes you read that right) is a creamy, delicate imperial milk porter with a giant addition of raspberry puree, cocoa nibs and vanilla.  Decedent, dessert-like, and delicious with flavor notes of milk chocolate, ripened raspberries and hot cocoa.  Served in 16oz 4-pack cans and very limited draft, it is a switch compared to our very heavy IPA wheelhouse. Although it’s something we have wanted to brew for years.

Ah, yes, that is a piece of chocolate and a berry falling deeply in love on that label…

With both of these new releases we would love to give some thanks and appreciation to Peak Design Collective (@peakdesigncollective) for creating and designing these labels. 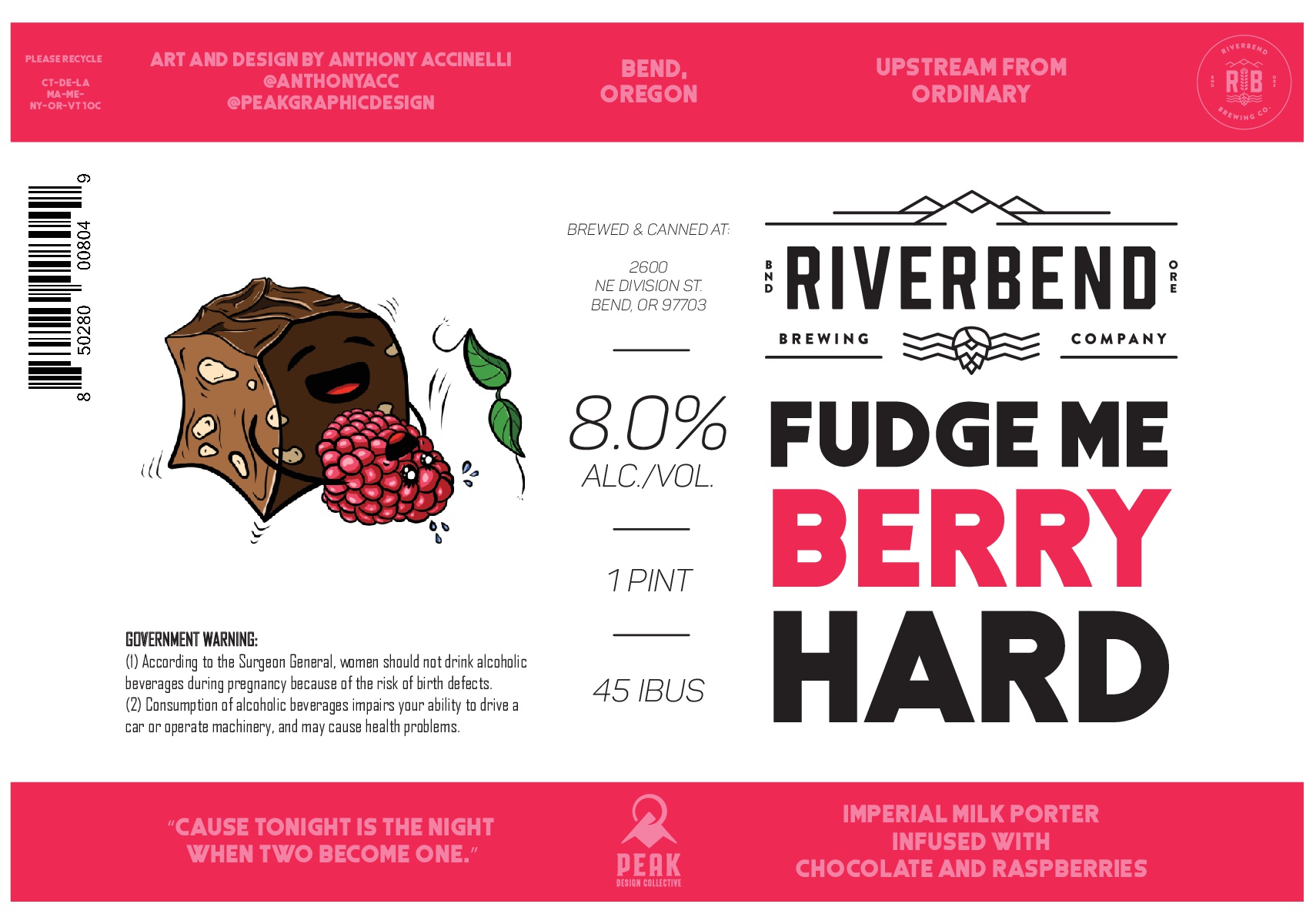 Blunder Armour will debut in Bend at On Tap beer bar on Saturday April 6 from 11am-9pm.  Expect the Riverbend crew to be in attendance, along with Alex and Diana from Cascade Armory to share their story and showcase their clothing line.  Additional release parties are being scheduled for the Portland area and Washington. Fudge Me Berry Hard will be canned on April 17, hitting store shelves soon after that.  Be sure to check out our Instagram page @riverbend_brewing for updates.