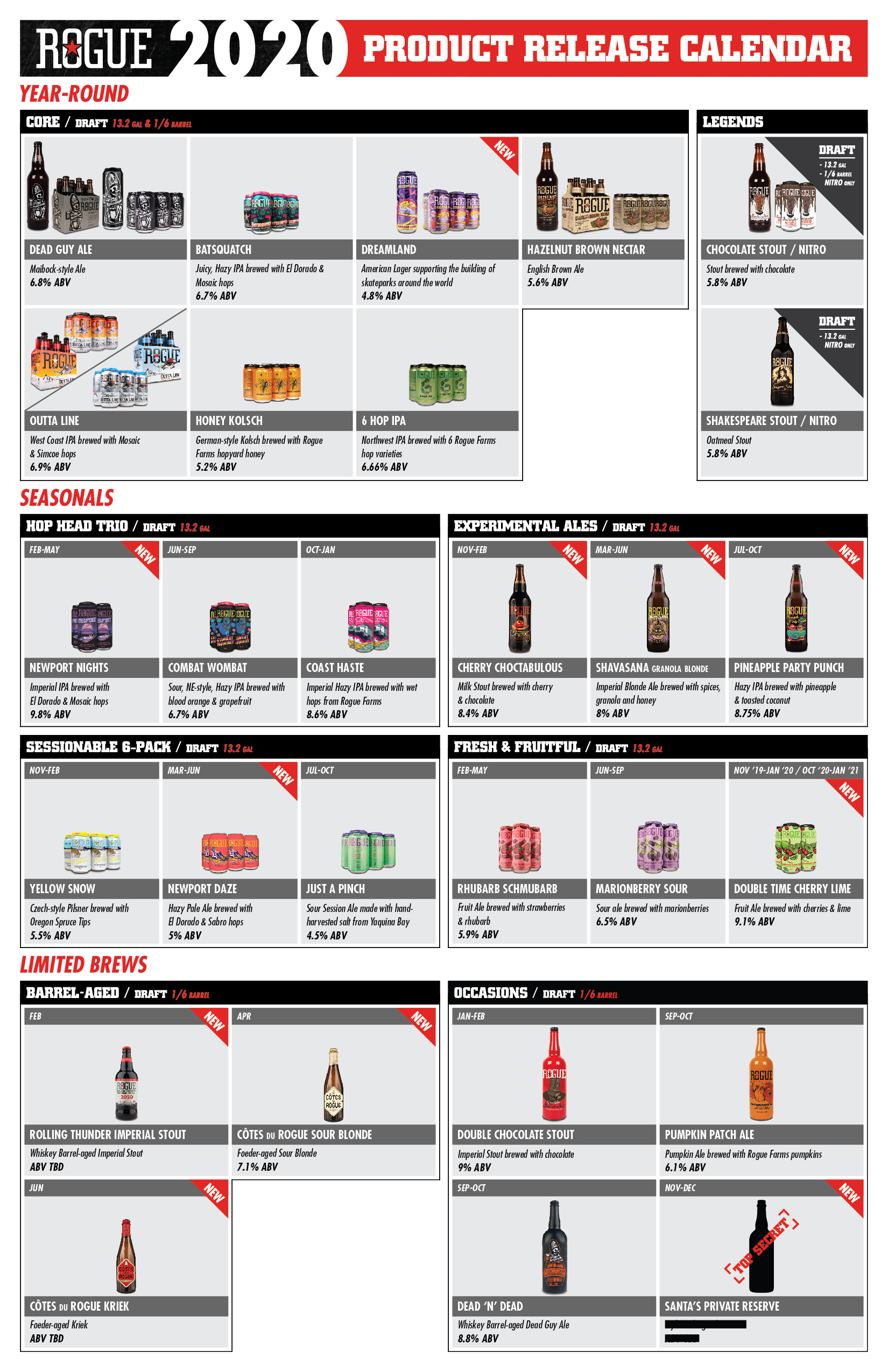 The new year marks the 32nd year for Rogue Ales & Spirits and the Newport, Oregon based brewer has just announced its 2020 Beer Release Calendar. In the coming year Rogue Ales will return with many of its fan favorites alongside eleven new beers.

2020 will also be the first year in 30 years that John Maier is not at the brew kettle as the long time Rogue brewer retired last summer after three decades in Newport. After Maier’s retirement, Joel Shields took over as Rogue Brewmaster and has been adding his own touch to many of the new beer releases from the brewery.

“I am extremely proud of our 2020 products,” said Dharma Tamm, Rogue President, in a statement. “We will be releasing some great new beers including an American lager, a foeder aged sour blonde and an imperial hazy IPA, while still continuing to make fan favorites like Dead Guy and Batsquatch. We have pushed the boundaries this year and we can’t wait for our fans to try them.”

Here’s a snapshot of many of the new beer releases from Rogue during the coming year.

Dreamland American Lager (4.8% ABV) – Our biggest launch in 2020, Dreamland is a simple, crisp lager for year-round crushing from which a portion of the proceeds will go toward building skateparks around the world. Available year-round.

Cherry Choctabulous (8.4% ABV)  – Sweet aromas of chocolate and cherry are prevalent on the nose, the initial hit of cherry gives way to dark chocolate that fills out the mid palate, finishing with one last blast of cherry before ultimately resigning with the slightly bitter bite of dark chocolate. Available Nov 2019 – Feb 2020.

Double Time Cherry Lime (9.1% ABV) – Both tart and sweet cherries are balanced by citrus lime that adds a sour base in this light bodied seasonal rotator. Available Nov 2019 – Jan 2020.

Newport Nights (9.8% ABV) – This imperial IPA opens with aromas of mango, papaya and tangerine followed by an atom bomb of pine and grapefruit, ultimately delivering a monstrous hop punch that is surprisingly smooth. Available Feb – May.

Pineapple Party Punch (8.75% ABV) – An imperial hazy IPA that is reminiscent of our favorite tropical drink, the Pina Colada, and is bursting with pineapple, coconut and tropical hop flavors. Sold in 22oz bottle that is perfect for sharing. Available Jul – Oct.

Use the Rogue Finder to find any of Rogue beers near you.