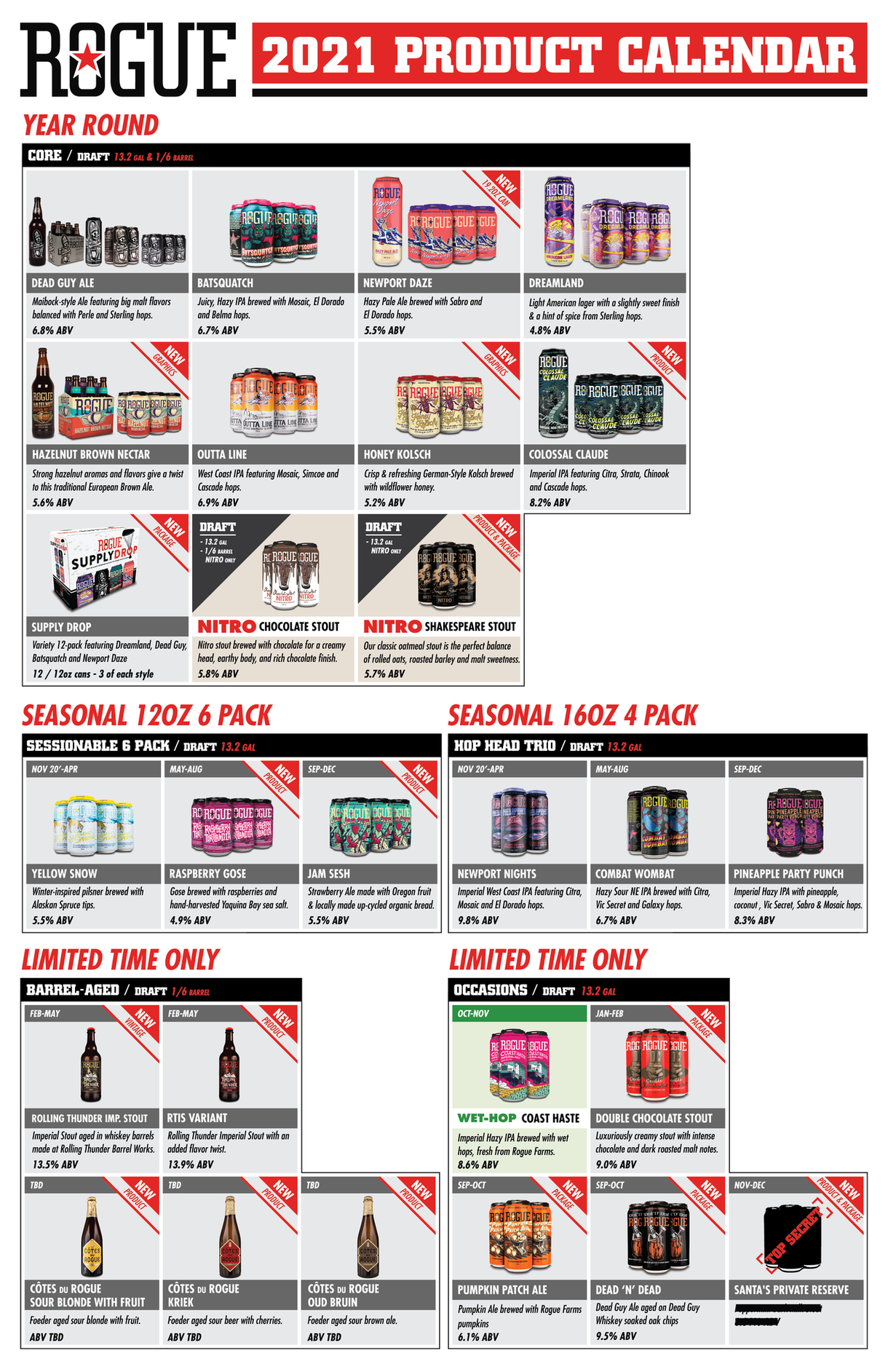 The upcoming year will be an exciting one for Rogue Ales & Spirits and its fans from around the world. As the Newport, Oregon based brewer announces its 2021 Beer Release Calendar, look for new packaging and size formats on a few of its long standing beers while ten new beverages will be forthcoming in 2021.

“I couldn’t be prouder of our 2021 products,” says Dharma Tamm, Rogue President, in a statement. “We are adding Colossal Claude, a monstrous, flavor-forward, Imperial IPA, to our core year-round lineup. Some of our favorite beers are getting a new look and we’re brewing some really fantastic seasonal products and limited-time offerings. 2021 will also be our first year with a nationwide 12-pack variety pack, which includes Dead Guy, Dreamland Lager, Newport Daze and Batsquatch. This is something our fans have asked about for years and we’re excited to see this variety pack on shelves across the country!”

In addition the forthcoming beers in 2021, Rogue will also be updating its packaging on a few offerings, all created by its in-house design team. Both Honey Kolsch and Hazelnut Brown Nectar will feature new eye-catching can designs in the new year. Shakespeare Stout Nitro, Double Chocolate Stout, Pumpkin Patch Ale and Dead ‘N’ Dead will all be available in a new 16 oz 4-pack can format.

“Having an in-house design team for packaging development is a key asset because it gives us flexibility, consistency, shortened lead times and greater output,” says Hagen Moore, VP of Marketing & Creative, in a statement. “You’ll see the results this year in the redesign of our Honey Kolsch and Hazelnut Brown Nectar, two long time Rogue favorites. Still fantastic beers but everything needs a fresh coat of paint or some new duds now and then and for these two it was their time. We also brought our limited-time-only offerings into the 16oz format and with that came some new designs, so lots of exciting products and packages coming out this year. Keep an eye out for them and I hope you enjoy.”

Here’s an overview of the new beers as provided by Rogue Ales.

Colossal Claude Imperial IPA (8.2% ABV) – Their biggest launch in 2021, Colossal Claude is a Northwest Imperial IPA that offers citrus and floral hop aromas on the nose and finishes a touch on the bitter side with plenty of soft pine and resinous hoppy notes. Available year-round.

Shakespeare Stout Nitro (5.7% ABV) – The addition of nitro to this classic oatmeal stout adds an intense depth of flavor that creates the perfect balance of rolled oats, roasted barley and malt sweetness. One of Rogue’s original beers, this stout has earned the most awards and highest ratings of any of their beers. Available year-round.

Raspberry Tartlandia (4.9% ABV) – This gose is brewed with raspberries and sea salt that was hand harvested from the Yaquina Bay in Rogue’s backyard. Available May – August.

Cotes du Rogue Sour Blonde with Fruit (ABV TBD) – This limited-edition sour blonde made with fruit is part of a foeder aged sour series. It offers a tart flavor with hints of oak, lemon, vanilla and apricot. Available April.

Use the Rogue Finder to find any of these products near you.