Ground Breaker Brewing, the nation’s first 100% dedicated gluten-free brewery, is rolling out the first release of the year in their Roll Up Door Series. Ground Breaker’s Imperial IPA weighs in at a staggering 10% ABV and 100 IBU. A uniquely American style, this double India Pale Ale boasts enough alcohol and bitterness to satisfy even the most enthusiastic Northwest hophead. It’s a gluten-free beer best enjoyed fresh, before the hop flavor and aroma dissipates.

Ground Breaker’s Imperial IPA will be released Thursday April 27th , and will be available through the Ground Breaker Gastropub and Bring on the Beer, the Pacific Northwest’s #1 online craft beer store. 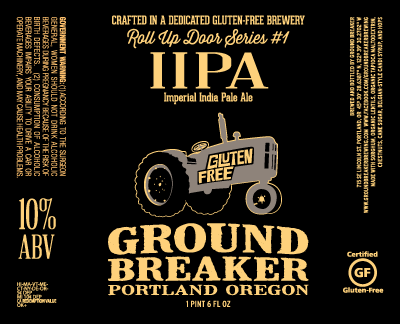 Ground Breaker will be pouring pints of IIPA during their Taproom Takeover at Cidra Cider Room in Bellingham, Washington on April 29th from 5-7pm. 22oz bottles will also be available for purchase. In addition, the Tap Takeover will feature 7th Avenue Saison and Coffee Pale Ale.

About Bring on the Beer
Bring on the Beer is a trusted online beer store making the most highly sought after, award-winning, hand crafted beers of the Pacific Northwest available to people across the US. We specialize in delivering the best tasting and hardest to find brews anywhere.
http://www.bringonthebeer.com/
https://www.facebook.com/BringOnTheBeer/

About Cidra Cider Room
Cidra Cider Room opened as Bellingham’s only cider bar in September 2015. They are located inside of the well established Elizabeth Station craft beer bar and bottleshop in Bellingham, Washington.
http://www.estationbeer.com/tap-menu
https://www.facebook.com/cidracider/