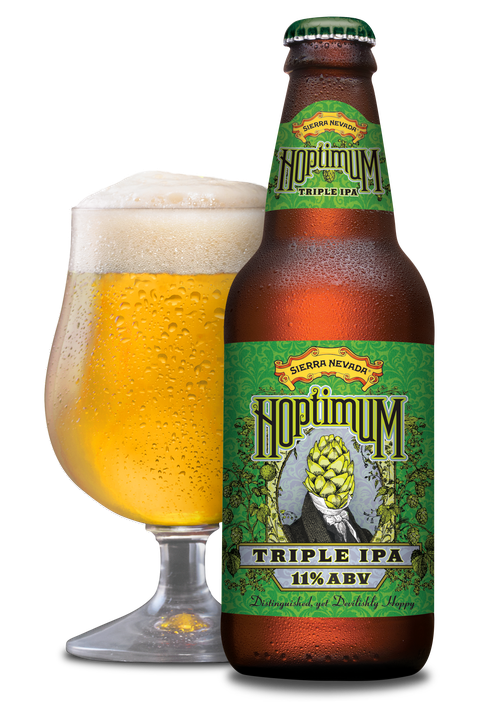 CHICO, California (April 8, 2021) – Sierra Nevada Brewing Co. announced the release of Hoptimum Triple IPA, which will be available at select retail locations starting in mid-April. Hoptimum is a special, limited release and a member of the brewery’s High Altitude Series. This limited-time offering, which is touted as Sierra Nevada’s hoppiest beer, is available in 6-packs of 12-ounce bottles and draft while supplies last or through August when the next beer in the High Altitude series is rolled out. New this year, the beer features the highest ABV ever for a Hoptimum Triple IPA release.

Each year the brewers refine the Hoptimum Triple IPA recipe, tinkering with the hop line-up to ensure the beer offers a similar flavor profile, while also featuring the finest, most flavorful hops of the recent hop harvest season.

For 2021 the beer features Magnum, Idaho 7, El Dorado, and Mosaic hops on the hot side, and finishes by dry hopping with Citra, Mosaic lupulin powder, Loral, and Magnum hops. It comes in at 11% ABV and 75 IBU, up from last year’s version that was 10.6% ABV. The process of creating the beer involves the use of Sierra Nevada’s innovative dry-hopping device dubbed the Hop Torpedo, which is used to impart optimal hop aromas and flavors without adding bitterness.

The High Altitude series from Sierra Nevada consists of three limited-time offerings each year, including Bigfoot Barleywine-Style Ale (December-April), Hoptimum Triple IPA (April-August), and Narwhal Imperial Stout (August-December). This collection of monstrous beers each tout high gravity ABVs of 9.5% or more and are released in limited quantity so they are available only while supplies last.

About the Hop Torpedo
Dry hopping is a way to give beer more flavor and aroma, not more bitterness. A traditional method is filling nylon sacks with hops and suspending them in fermentation tanks. But sometimes brewers would remove those sacks—even weeks later—and they’d be dry in the middle! With the Hop Torpedo, the brewers can maximize every hop. Beer circulates out of a fermenter, flows through the column of hops, and back into the tank. By adjusting the time, temperature and speed of circulation, brewers can control the aromas and flavors in a finished beer. The Hop Torpedo invention led to the development of the successful year-round beer from Sierra Nevada called Torpedo® Extra IPA.

About Sierra Nevada Brewing Co.
Inspired by frequent trips to the Sierra Nevada mountain range, Ken Grossman founded Sierra Nevada Brewing Co. in 1980. Highly regarded for using only the finest quality ingredients, Sierra Nevada has set the standard for craft brewers worldwide with innovations in the brewhouse and in its sustainability efforts. The pioneering spirit that launched Sierra Nevada now spans both coasts with breweries in Chico, California and Mills River, North Carolina. Sierra Nevada is famous for its extensive line of beers including Pale Ale, Hazy Little Thing®, Torpedo® and a host of seasonal, specialty and limited release beers. Learn more at www.sierranevada.com.