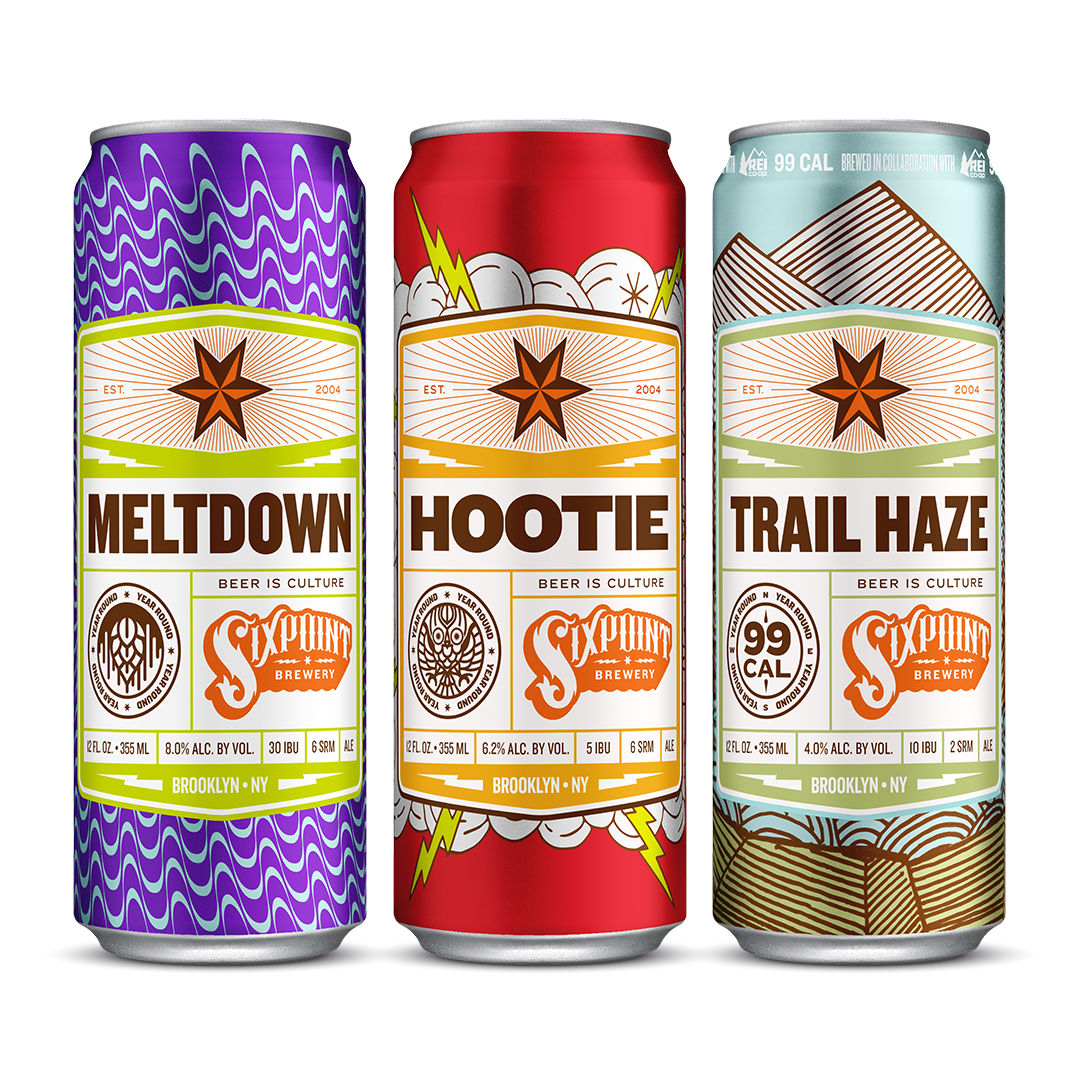 Over the last 25 months, Sixpoint has been running a Small Batch innovation program with multiple new formulas released every month— over 65 new beers in total. The three new year-round beers have been tested at small scale extensively through multiple releases, incorporating feedback, and even going so far as to survey a group of “Super Fans” on their opinions of the beers across several iterations. These three top formulations are now going next level for all to enjoy. Sixpoint’s Small Batch program is on a brief hiatus in the run up to their tap room grand opening later this year in Gowanus. After the tap room opens, the Small Batch program will resume.

The first beer, Trail Haze, is a 4% ABV, 99 calorie Hazy “Adventure” IPA, hopped with Southern Hemisphere favorites Vic Secret and Enigma, as well as Mosaic, and produced without any sweeteners or flavorings. The beer is a collaboration with the outdoor recreational co-op REI.

Sixpoint and REI’s relationship began through event partnership and Sixpoint’s support of REI adventures in the NY metro area. The two teams then developed Trail Haze in the summer of 2019 and released it through Sixpoint’s Small Batch events, as well as at major events at REI’s NYC location, including the announcement of their #opttoact campaign, which presented people with a 52 week plan to take action to reduce their impact on the environment in partnership with the NYC Mayors Office of Sustainability, and “Pray for Snow” Party.

Trail Haze is an innovative formula using rice and highly attenuative brewing techniques to create a light, crisp, low calorie beer that drinks with the texture and quality of real hazy IPA but doesn’t slow you down. The beer is aggressively dry-hopped with a blend of American and Australian hops to be extremely aromatic and expressive.

Next up is Hootie, a 6.2% ABV, 5 IBU IPA gratuitously dry-hopped with three hops directly-sourced from farms in the Pacific Northwest and Idaho—Idaho 7, El Dorado, and Amarillo—with Australian Galaxy hops as well to boost the overall potency. It’s an everyday Hazy IPA that’s designed to be incredibly juicy and aromatic, and also very easy to drink with low bitterness.

The hop strains for Hootie were selected to leverage the direct-to-farmer hop relationships that Sixpoint has cultivated over the years. The beer features the Idaho 7 hop sourced directly from Nate Jackson of Jackson Farms, the breeder of the varietal. Sixpoint also uses El Dorado hops directly sourced from Graham Gamache at Cornerstone Ranches, and the Amarillo variety comes from Double R farms, both in Washington’s Yakima Valley.

Hootie was one of the first releases from Sixpoint’s Product Development team and has been worked on for over two years. Sixpoint released the beer in 16 oz cans for limited distribution in mid-2019, and the final update to the beer is raising the ABV slightly, from 5.4 to 6.2, to precisely dial in the formulation.

The third year-round addition is Meltdown, an 8.0% ABV, 20 IBU, double IPA intensely hopped with Mosaic and Mandarina Bavaria. This beer has a smooth, soft, hazy body meant to be extremely lush and juicy.

Meltdown is Sixpoint’s expression of the New England Double IPA experience at scale— complete with all the rich texture, extreme hopping rate, and ripe juiciness the style is beloved for— and available on shelves consistently.

Meltdown was released through Sixpoint’s Infinite Loop rotating IPA series and became an instant favorite, with tasters lauding the smooth and soft body of the beer, plus the complex aroma of both ripe tropical fruit and bright orange peel.

The new year-round beers will serve as everyday staples alongside classic favorites like Sweet Action, Bengali, Resin, and The Crisp. Sixpoint will also be releasing a robust seasonal program in 2020.