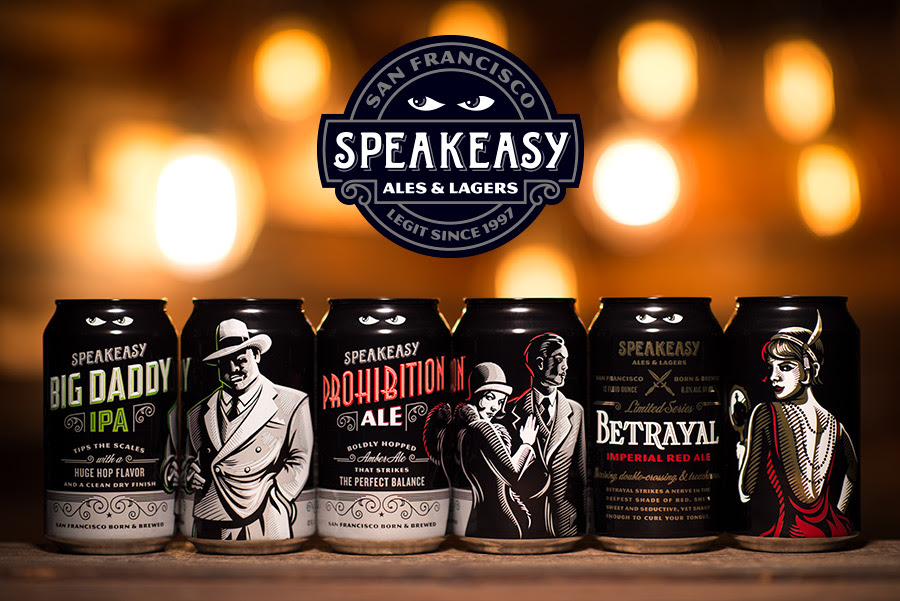 San Francisco, CA – (September 27, 2016) – Speakeasy Ales & Lagers is excited to announce the release of three new cans this fall, including their best selling flagship beers, Big Daddy IPA and Prohibition Ale. By popular demand, Betrayal Imperial Red Ale will also return in a can to Speakeasy’s Limited Series lineup. All three beers will be packaged and shipped to distributors in October.

Speakeasy started filling cans in 2015 with the debut of their Session Series, followed by Double Daddy Imperial IPA in the spring of 2016. The success of those releases, coupled with more consumer interest in canned beer, made canning flagship and seasonal beers an easy choice. Moving forward, Speakeasy fans can expect an even larger portfolio of canned beer, excluding barrel-aged releases.

According to Forest Gray, Speakeasy’s founder and CEO, “We’ve always believed cans are a better package. They don’t allow light or oxygen into the beer, they’re portable, and easier to recycle. When someone goes into a market to pick up a six pack of beer, I can’t find a good reason for them to walk out with something that weighs twice as much and provides the same experience, if not better, in a can.”

Prohibition Ale and Big Daddy IPA will be available year-round in cans. Prohibition Ale was the first beer Speakeasy bootlegged back in 1997. Year after year it’s been an award-winning staple, recently receiving a gold medal in the amber/red category at the 2013 Great American Beer Festival. Big Daddy IPA joined Speakeasy’s lineup in 1999, and helped establish the popularity of West Coast IPAs.

Returning after a 2 year hiatus, Betrayal Imperial Red Ale will be Speakeasy’s first seasonal can release from October to January. “It’s a celebration of rich malt in harmony with aromatic hops,” said Zambo, Speakeasy’s Director of Brewing. The recipe was slightly tweaked, adding more hops and layers of malt flavor to make it even more delicious and memorable.

Fans of Speakeasy’s Limited Series beers like Betrayal can also expect a more varied lineup in the year’s ahead. According to Forest Gray, “We’re looking at switching some of the beers around to provide diversity and variety year to year. While it won’t be made this year, look for the return of Butchertown India Black Ale in 2017.”

About Speakeasy Ales & Lagers
In 1997 a wily band of bootleggers led by homebrewer Forest Gray were inspired to bring their exceptional brews from the underground to the masses, defiantly producing small batches of beer in a secret warehouse in San Francisco. Starting with a single, iconic beer, Prohibition Ale, Speakeasy now brews a wide array of acclaimed beers including Big Daddy IPA, Payback Porter, Double Daddy, Scarface Imperial Stout and many more, which are distributed across the entire West Coast and other major U.S. markets. Speakeasy Ales & Lagers is located at 1195 Evans Ave in San Francisco, CA.