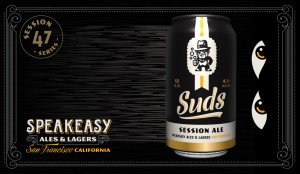 San Francisco, CA (July 14, 2015) – Suds Session Ale is a unique, frothy suspect, that’s hard to pick out of a police lineup. The beer was inspired by Vienna Lagers, but fermented with California ale yeast. It associates with English Pale Ales, minus the earthy hops. Eyewitnesses have confirmed that Suds Session Ale is a brass colored, light-bodied, malt-forward session beer that’s loaded with flavor. It will be released year-round by Speakeasy Ales & Lagers, on draft and in cans, starting in August.

Approachable, easy drinking, and designed for indulgence over long afternoons, Suds Session Ale is a new member of Speakeasy’s Session 47 Series. The aroma and flavor is reminiscent of baked biscuits, caramel, and fresh dark bread. “Suds is focused on the malts,” according to Kushal Hall, Speakeasy’s Director of Brewing. The beer is made with a blend of American Two-row, English Maris Otter, and a small amount of Carafa and Carahell malt.

Hops were just an accomplice in the creation of Suds Session Ale. Columbus hops were utilized to achieve a mild bitterness at 35 IBU’s, while Cascade and Merkur add a subtle touch of citrus. The beer drinks with a crisp carbonation, smooth mouthfeel, and a hint of sweetness. Finishing at 4.7% alcohol by volume, Suds Session Ale is great choice for long lazy days by the river, beach, pool, or anywhere else refreshment is needed during a getaway.

About Speakeasy Ales & Lagers
Since 1997, a wily band of bootleggers led by homebrewer Forest Gray were inspired to bring their exceptional brews from the underground to the masses, defiantly producing small batches of beer in a secret warehouse in San Francisco. Starting with a single, iconic beer, Prohibition Ale, Speakeasy now brews a wide array of acclaimed beers including Big Daddy IPA, Payback Porter, Double Daddy, Scarface Imperial Stout and many more, which are distributed across the entire West Coast and other major U.S. markets.