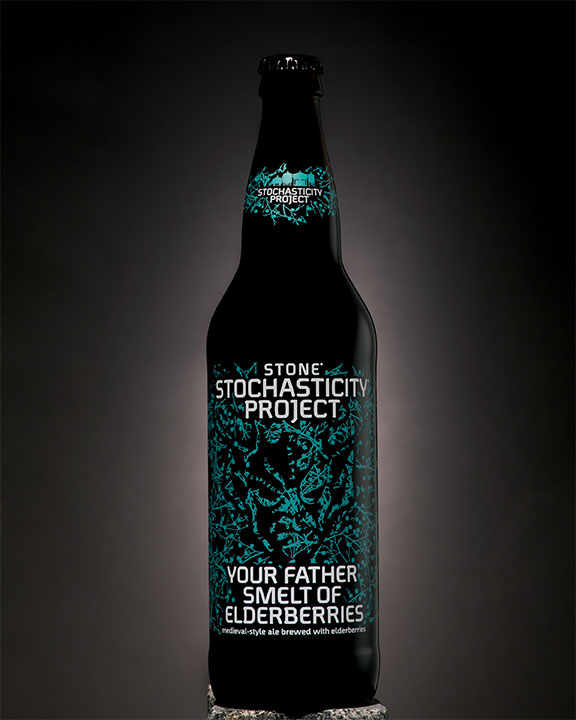 ESCONDIDO, CA (Sept. 8, 2015) – Hear ye, all brethren and sisteren embattled in the quest for fine ales, seekers of the holy grail of fermented potables—we share in your unquenchable thirst for adventure, flavor and experimentation and bringeth thee a quaff built to satiate all three: Your Father Smelt of Elderberries. More mysterious than a Trojan rabbit, more unexpected than the abrupt intervention of peacekeepers at the close of a cinematic epic, this modern take on a medieval beer recipe celebrates the brewsters of yore, forging forward while harkening back to ancient times.

When the Earth’s rotation brings it to a space and time wherein the moon and Jupiter find themselves in perfect alignment (i.e., September eighth of the year two thousand and fifteen), Your Father Smelt of Elderberries shall take its rightful place on the shelves of many apothecary and elixir merchants, and as a means of draft-borne imbibing pleasure at taverns, inns, ale houses and grog shops throughout the kingdom. 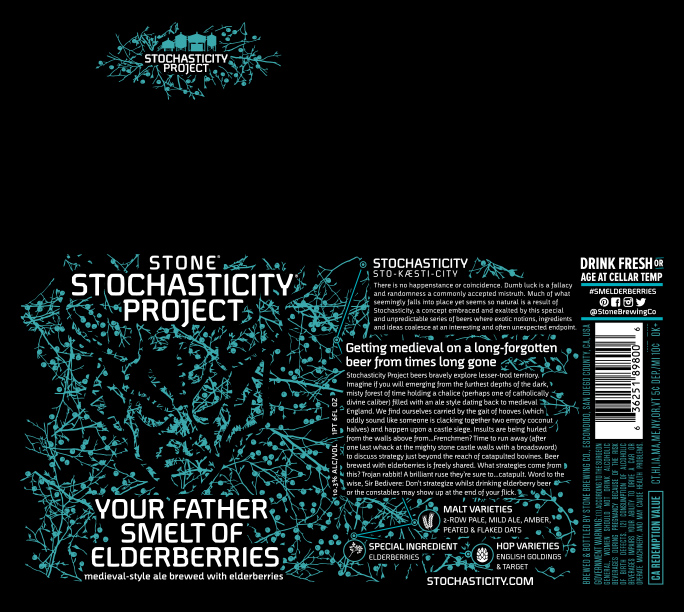 Your Father Smelt of Elderberries bridges the realms of historic and contemporary brewing, extracting the tartness of elderberries as brewsters in medieval England once did. This noble fruit has since fallen out of favor along with other spicing agents of eras long past (e.g., mugwort, grains of paradise), with the flowers of the mighty hop bine rising to prominence and providence. So much so, Brewmaster Mitch Steele and his round table of brewing knights saw fit to include Target and Goldings cultivars, thus birthing a complex 10.3 percent alcohol-by-volume ale of unique stock fit for historians and the most fervent of forward-looking beer geeks alike.

Stochasticity Project Your Father Smelt of Elderberries shall be presented in artfully adorned bottles measuring roughly three-fifths of a litre (i.e., twenty-two ounces, for ye of yon New English colonies) and in casks forged of stainless steel. Thine inventive brew is limited in nature and should be sought out and swigged at its freshest or stowed at proper cellar temperatures (55°F or lower).

Sayeth the Brewmaster
by Stone Brewmaster Mitch Steele
Aesthetic: Pours red with purple hues and a thin off-white head.
Aroma: There is a lot going on, with bready yeast character followed by smoked malt and hints of fruit and berries.
Flavour: Maltiness and light peat smoke upfront, berry fruit character in the middle, and some alcohol warmth and strong bitterness on the finish.
Palate: Full bodied, bitter and slightly tart.
In Summation: A really unique and interesting beer, it has the malty and warming qualities of English barley wines and old ales. There is the twist of adding elderberries, a fruit that was used in medieval brewing. Peat-smoked malt was used to replicate the smoky character that such historical beers were believed to have, since malt at the time was dried over peat or wood fires. The end result is a complex array of flavors, and this beer should age wonderfully when stored at cellar temperatures (55°F or lower).