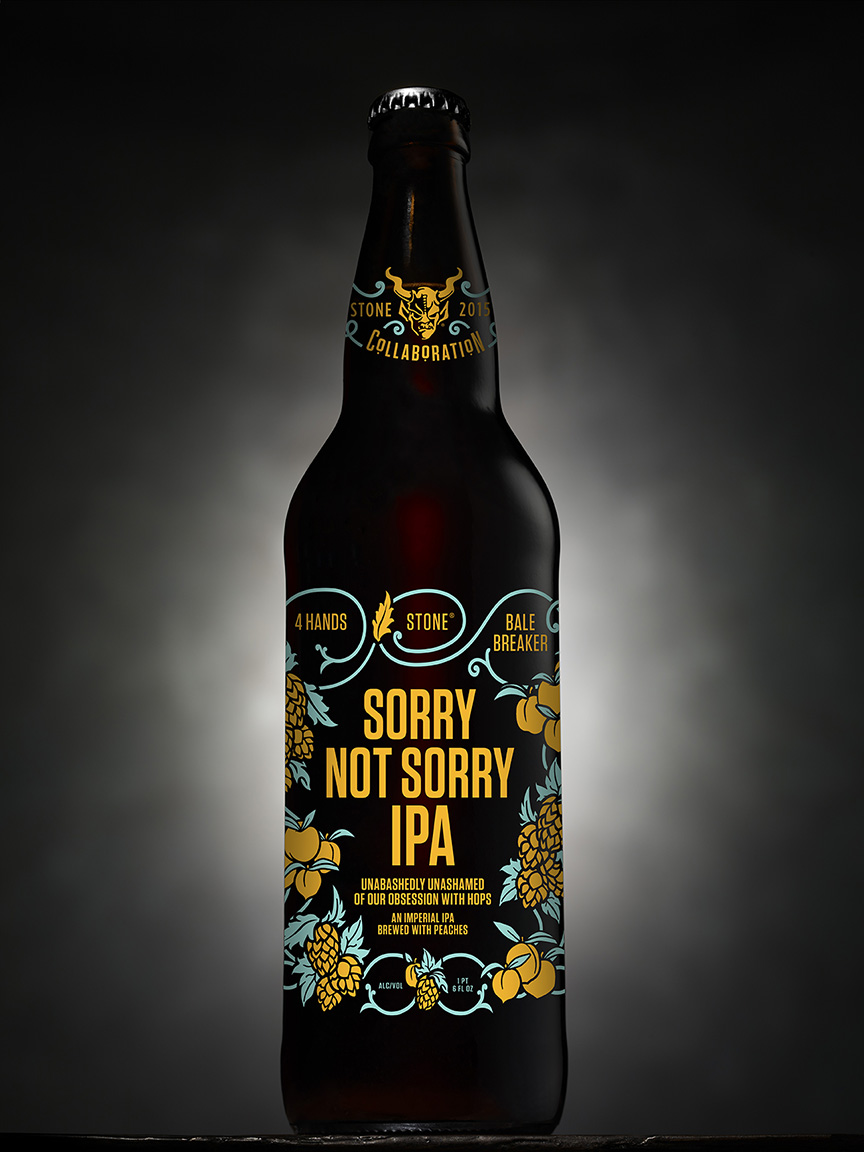 The latest in collaboration releases from Stone Brewing Co. is with 4 Hands Brewing Co. and Bale Breaker Brewing Company. Both of these two breweries are on the cutting edge when it comes to the latest generation of craft brewers. With this new 4 Hands / Bale Breaker / Stone Sorry Not Sorry IPA it will be a rare opportunity to have access to a beer from Yakima, Washington based Bale Breaker Brewing and even more so with St. Louis based 4 Hands Brewing. According to the press release from Stone this Imperial IPA is brewed with experimental hops and peaches and will start arriving today in 22-ounce bottles and on draft at retailers, restaurants and bars where Stone beer is sold.

The concept of this IPA started forming after Stone Brewmaster Mitch Steele was encouraged by Team Stone members to visit and sample beers from 4 Hands. Steele was impressed with their lineup, and the St. Louis-based beer company was added to Stone’s “awesome breweries to collaborate with” list. During last year’s hop selection in Yakima, WA, Stone Lead Brewer Jeremy Moynier and Steele stopped by Bale Breaker, a craft brewery that had recently opened on the storied B.T. Loftus Ranches hop farm. While enjoying a few heavily hopped IPAs, Moynier and Steele knew this would be the perfect addition to the admittedly hop-obsessed trio.

“The family operating B.T. Loftus Ranches and Bale Breaker has been growing hops since 1932, so there’s no doubt they are hop fanatics like us here at Stone,” explains Steele. “Plus, 4 Hands Brewing Co. has made some amazing beers that use unconventional brewing ingredients to accentuate the qualities of hops. This beer truly reflects the skills of three brilliant IPA brewers.”

When brainstorming recipe ideas, it was decided that Simcoe and Mosaic hops were a must, especially since B.T. Loftus Ranches was the first hop farm to commercially grow the beloved Simcoe varietal. But the goal of Stone Collaborations is about exploring uncharted territory. Thus, the trio decided that puréed peaches should be added to up the fruit factor, while experimental hops HBC 342 and HBC 344 were selected to provide notes of pine, berries, citrus and stone fruit. Thanks to Munich malt used for the grain bill, the beer has a golden, light-brown appearance and a slightly sweet finish, which perfectly balances the smooth hop bitterness.

To experience these newly cultivated hops and in all their glory, fans should enjoy 4 Hands / Bale Breaker / Stone Sorry Not Sorry IPA fresh and within 90 days after “bottled on” date on the bottle neck. This beer is a magnificent example of what happens when talented brewers band together to explore new hoppy territory for the IPA. After all, who says the world needs another IPA? We do! 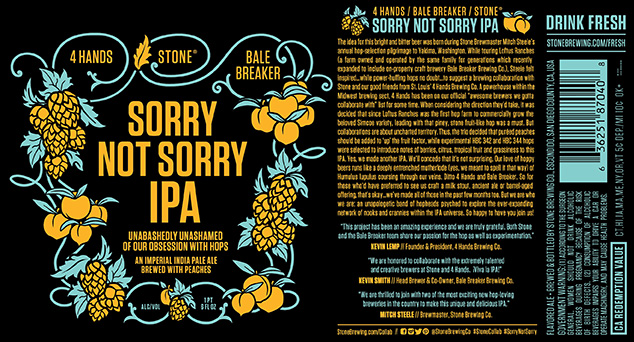 Tasting Notes provided by Brewmaster Mitch Steele
Appearance: Pours a golden, light-brown color.
Aroma: As expected, hops dominate the aroma with lots of pine, resin and stone fruit (peach/apricot) qualities. Hints of peach nectar are also apparent as the beer warms and opens up.
Taste: Fruity and hoppy, the hops provide a blend of stone fruit, piney-hop resin and hints of dankness, tropical fruit and citrus. There are prevalent peach fruit flavors that really complement the hops, especially as the beer warms up. The Munich malt provides some nice color and balance to the hop bitterness, and the beer finishes slightly sweet with a very smooth bitterness.
Palate: Rounded but bitter with some light sweetness
Overall: Two of our favorite new breweries joined us for this fun collaboration. 4 Hands Brewing Co. of St. Louis and Bale Breaker Brewing Company of Moxee, Washington, are good friends and great brewers, and they certainly love their hops. So when we first started talking about brewing, the idea of brewing a double IPA was the only option that was really ever on the table. The team at Bale Breaker helped us secure an experimental hop, currently named HBC 344, for use in this beer. To that we added another experimental hop that we had here at Stone, HBC 342. And then we added some Simcoe and Mosaic for good measure. We talked at length about adding some fruit to the beer that could complement the hop character, and the team at 4 Hands suggested peaches, which sure enough combines with the stone fruit character of the hops wonderfully.

About Stone Brewing Co.
Founded by Greg Koch and Steve Wagner in 1996, San Diego-based Stone Brewing Co. is the 9th largest craft brewer in the United States. Stone has been listed on the Inc. 500 | 5000 Fastest Growing Private Companies list 11 times, and has been called the “All-time Top Brewery on Planet Earth” by BeerAdvocate magazine twice. The multifaceted company will be the first American craft brewer to own and operate its own brewery in Europe, and is also building a production brewery and destination restaurant in Richmond, Virginia. Brewing at both locations is anticipated to begin in early 2016. Known for its bold, flavorful and largely hop-centric beers, Stone has earned a reputation for brewing outstanding, unique beers while maintaining an unwavering commitment to sustainability, business ethics, philanthropy and the art of brewing. For more information on Stone Brewing Co., please visit stonebrewing.com or the company’s social media sites: Facebook, Google+, Instagram, Pinterest, Twitter and The Stone Blog.