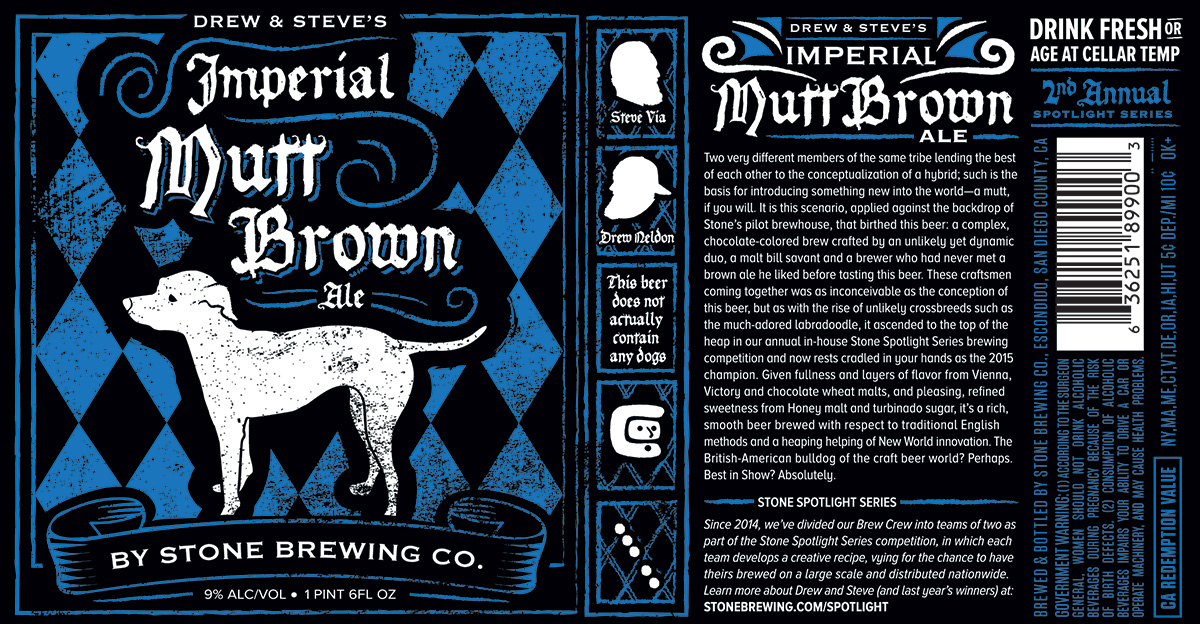 ESCONDIDO, CA (April 13, 2015) – To “spotlight” its brewing team’s creativity in 2014, Stone Brewing Co. introduced the Stone Spotlight Series, an annual internal competition celebrating what craft beer is all about: Ingenuity. Exploration. Fun. Ten teams of two vied for the chance to have their beer recipe brewed, packaged and distributed on a national scale. Starting today, Stone is proud to release the champion entry from this year’s competition—Stone Spotlight: Imperial Mutt Brown Ale. Fans may purchase the limited-release beer in 22-ounce bottles and on draft at retailers in select markets where Stone beer is sold.

Stone Brewing Supervisor Drew Neldon and Brewer Steve Via joined forces to develop the award-winning beer. When brainstorming recipe ideas, Neldon wanted to brew an altbier, while Via was interested in exploring brown ales. (Before crafting this beer, Via felt he’d never had a brown ale that synced with his palate.) Rather than focus on a single beer category, the duo decided to combine the best qualities of both styles by using four different malts to make a unique mongrel, hence the name: Imperial Mutt Brown Ale.

“With such talented and inventive brewers on our team, each installment of the Stone Spotlight Series has had very stiff competition,” explains Stone Brewmaster Mitch Steele. “During the judging session earlier this year, we were most impressed by the English notes coming from Drew and Steve’s beer. After brewing their recipe on our 120-barrel systems, the character of the English ale yeast really shines, along with the interesting blend of malts used.”

The beer’s grain bill is made up of Victory, chocolate wheat, Vienna and Honey malts. Fruity and bread-like aromatics are joined by subtle coffee notes. Mild roast and coffee traits carry over to the flavor, followed by hints of toffee and molasses. Magnum and East Kent Golding hops offer a restrained, balancing bitterness to a strong malt backbone. When all these qualities combine, the result is a full-bodied, malt-driven beer that’s smooth and easy to drink.

Stone Spotlight: Imperial Mutt Brown Ale is ready to be enjoyed fresh or may be aged for months or several years at proper cellaring conditions (55°F or lower). Although Drew and Steve’s Imperial Mutt Brown Ale will be available in limited quantities, fans can look forward to a new winning beer every year from the Stone Spotlight Series that showcases Team Stone’s brewing talent.

Tasting notes, provided by Stone Brewmaster Mitch Steele:
Appearance: Deep brown with a tan-colored head.
Aroma: Light coffee notes plus a strong bready and fruity presence from the English yeast, as well as hints of vanilla and anise.
Taste: Light-roasted malt and coffee flavors, followed by toffee malt notes, hints of molasses and a yeasty fruitiness. The beer is medium to full bodied, a little sweet and very smooth with a mildly dry finish.
Overall: When we tasted this beer during the judging session, several of us were impressed by how “English” this beer tasted. It reminded us of the fantastic yeast aromas one gets when walking into a historic Victorian English brewery. Now that we’ve brewed it on our big system, that yeast character shines, and so does the interesting blend of malts. The “Mutt” name comes from Drew and Steve’s attempt to combine the best of an altbier with a classic brown ale recipe. As such, the beer uses an English yeast strain but is brewed primarily with German malts: Vienna as the base malt with chocolate wheat malt and some Honey malt. The malts combine with turbinado sugar to create a pleasant molasses-tinged sweetness.