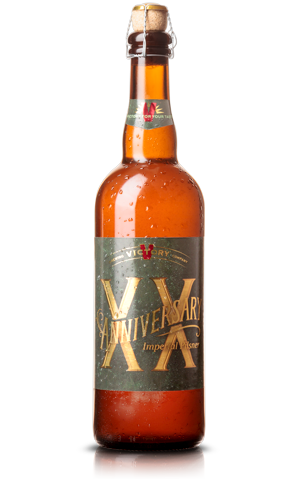 Fans love what’s inside and outside of Victory beer bottles. The anniversary label features a striking “XX” as its focal point so consumers know; Victory beer has been bold for 20 years and counting. Rich green and yellow imagery reflect the coming together of old-world Europe and new-era America to produce a brew that’s as full bodied with herbal hop notes, as it is deep malts. Craft-beer collectors will relish this unique packaging that embodies the past, present and future of Victory.

Anniversary XX Imperial Pilsner makes its debut mid-February and is available through April in a 750 ml bottle. Retailing at approximately $9.99, this intense, yet soothing brew demonstrates the full character of the German noble hops which balances this substantial beer of 8.0% ABV. Pilsner malts band together with Tettnang, Spalt and Mittelfrueh hops to create a unique Imperial Pilsner style, which holds true to Victory’s renowned approach to craft brewing. For two decades, the brewery has tapped into its founders’ roots in European brewing and this anniversary batch is no different.

Once poured, the pilsner’s color gradates from straw to golden yellow and tops off with thick white foam. Slight herbal tea, hay and floral notes dominate the carefully cultivated aromas while delivering a rich earthiness. As for taste, the subtle spiciness of hops meld with the warm flavors of German barley malts. Light citrus flavors cap off this bold combination for a revolutionary experience that’s perfectly drinkable.

Long before the anniversary celebration began, Victory had perfected their pilsner recipe. Most notably in Prima Pils, a brewery favorite, and strong, established brand with a loyal following of fans enamored by the compositions of malt and hops.

“Since Prima Pils has been one of our longest standing brands, it only makes sense that we debut this Imperial Pilsner in celebration of our 20th Anniversary,” said Victory’s President and Brewmaster, Bill Covaleski. “After twenty years of brewing, we’re proud to deliver Anniversary XX to craft beer fans as we look ahead to innovate on tradition for the next 20 years.”

About Victory Brewing Company
Victory Brewing Company is a craft brewery headquartered in Downingtown, PA. Founded by childhood friends, Bill Covaleski and Ron Barchet, Victory officially opened its doors in February of 1996. Victory’s second state of the art brewery opened in February of 2014 in Parkesburg, PA to serve fans of fully flavored beers in 37 states with innovative beers melding European ingredients and technology with American creativity. In addition to the original Downingtown brewpub, Victory’s second brewpub is in Kennett Square, while Parkesburg recently launched self-guided tours and the third brewpub. To learn more about Victory Brewing Company visit www.victorybeer.com.