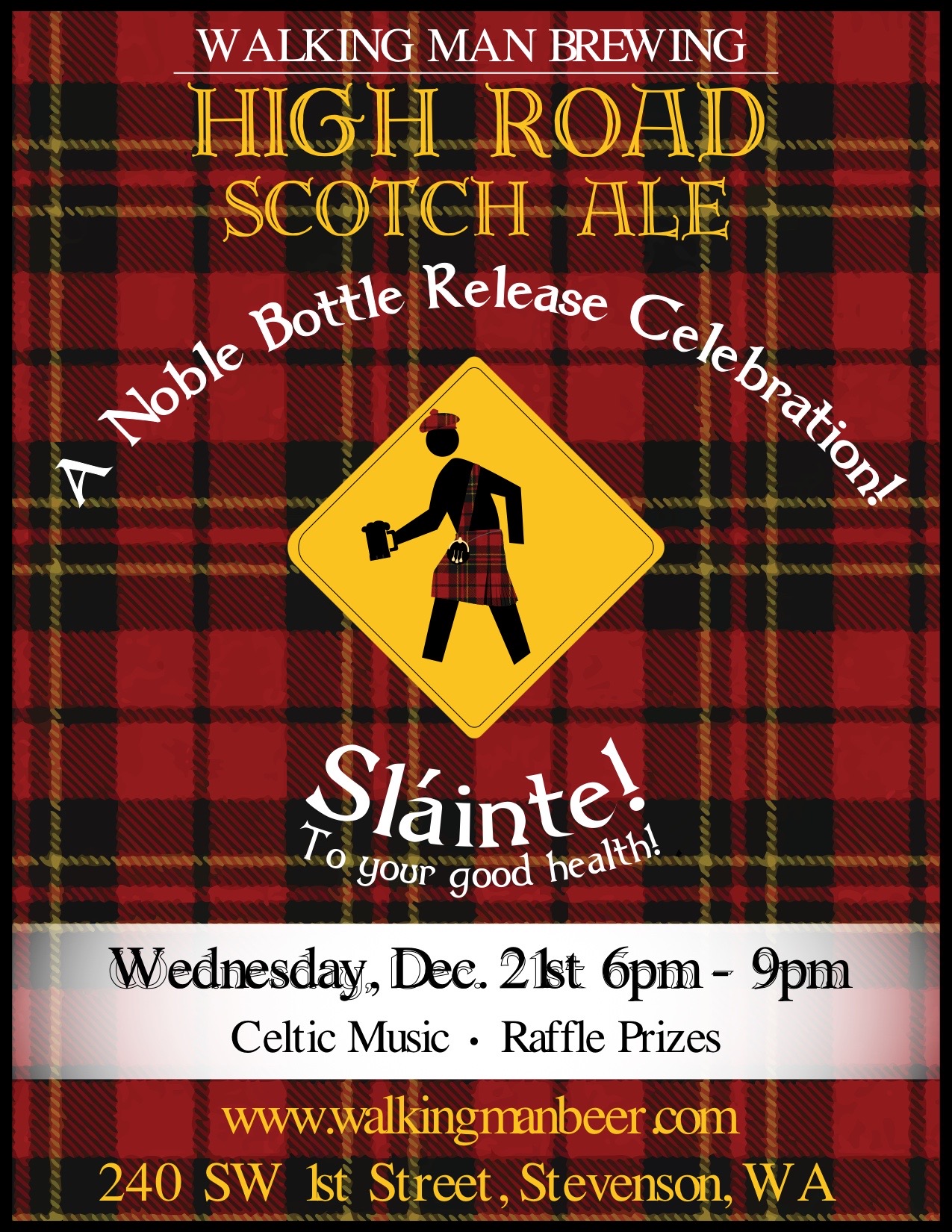 STEVENSON, WA (December 14, 2016) – Walking Man Brewing is set to release the first in a series of seasonal offerings by bottling High Road Scotch Ale in 22 ounce bombers. This special release means fans will be able to have yet another Walking Man Brewing seasonal available at specialty craft retailers along the I-5 corridor north of Seattle through Portland and throughout the Columbia River Gorge.

High Road Scotch Ale was the third brew ever produced by Walking Man Brewing in 2001 by owner and brewmaster, Bob Craig. Inspired by the legendary Traquair House Ale, the big, malt flavor of this brew was originally intended to balance out Walking Man’s hop forward lineup. Brewed in the traditional style of Scotch Ales the deep copper High Road puts forth a rich mouthfeel with deep malt flavor reminiscent of the beers you would find in the northern U.K. In 2008 High Road Scotch Ale won one of most prestigious awards in the beer industry: a gold medal at the Great American Beer Festival.

“I’m really excited to bottle the first of our seasonal beers and style wise get more of what we love to do into our fan’s hands”, said James Landers, Head Brewer.

Bottle Release Party at Walking Man Brewing: December 21, 2016 at 6:00 PM
Walking Man Brewing will host a bottle release party from 6:00-9:00 PM at the brewpub in Stevenson, WA. The event will feature music provided by Bill Shelton and Rob Barrick including bagpipes to get you in the Scottish spirit. High Road Scotch Ale in 22 ounce bottles will be available for sale as well as on tap. Raffle prizes every hour from 6:00-9:00 PM.

About Walking Man Brewing
Nestled in the small town of Stevenson, WA in the scenic Columbia River Gorge, Walking Man Brewing began impacting the Northwest craft beer scene in late 2000. Garnering medals and honors in some of the top beer competitions in the world, it has long since become a destination for beer enthusiasts from around the globe.

The brewery and brewpub is located at 240 SW 1st Street in Stevenson, Washington. For more information about Walking Man Brewing including brewpub hours, menus and happenings, please visit www.walkingmanbeer.com or contact (509) 427-5520 or info@walkingmanbeer.com.