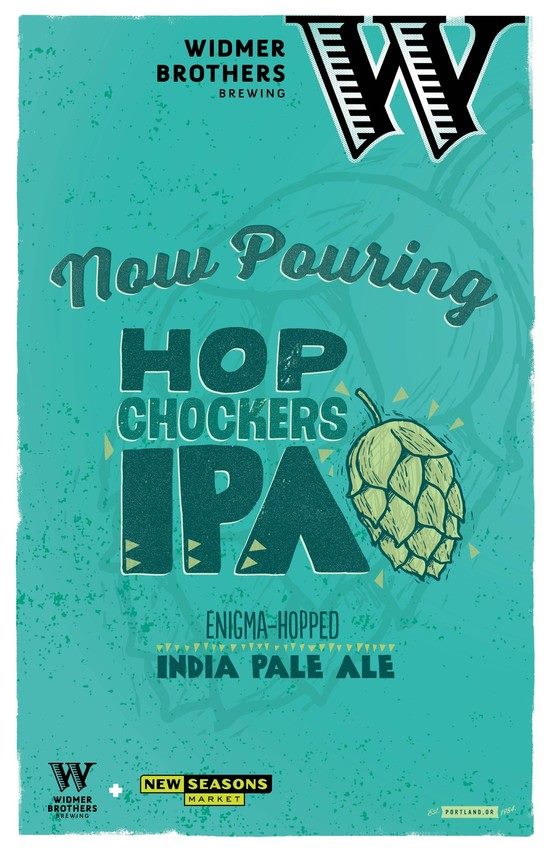 Hop Chockers IPA is available now at all New Seasons locations with growler filling stations, as well as the Widmer Brothers Pub. The genesis of the collaboration was a strong, longstanding relationship between the two Portland originals.

“For 16 years we have been very close to Widmer Brothers Brewing,” said Chris Tjersland, Partner Brand Development Manager at New Seasons Market. “The Widmer Brothers team, and Kurt and Rob Widmer themselves, have been a part of the New Seasons community since we opened our first store. We continue to be committed to connecting our customers with local producers and bringing them the best possible food, so we thought it was fitting to celebrate this milestone with a collaboration beer this year”

Hop Chockers combines two rye malts and four hop varietals, which give the beer a balanced combination of spice and fruitiness. With hops from the Pacific Northwest, New Zealand, and Australia, including the newest Aussie hop: Enigma, Hop Chockers imparts aromas of peach, fruit punch, lime zest, and chardonnay. Two types of rye malts and crystal malt lend a pleasing spiciness and caramel flavor that finishes with a moderate bitterness and lingering fruity flavors.

“When we got together with the folks at New Seasons to brainstorm for this IPA, they really wanted us to get creative with the hop profile,” said Corey Blodgett, lead innovation brewer at Widmer Brothers Brewing. “We decided to use a mixture of Meridian, Wakatu, and Enigma hops, which give Hop Chockers a complex flavor and aroma. Using rye in the mash gives this beer an interesting dichotomy of pleasant spiciness and robust fruitiness.”

The beer is available for a limited time on draught only at the Widmer Brothers Pub and all New Seasons locations with beer on tap: Cedar Hills, Grant Park, Nyberg Rivers, Mountain Park, Progress Ridge, Williams, Slabtown and Woodstock. For more information on Widmer Brothers Brewing, visit widmerbrothers.com or see what the brewery is up to on Facebook, Twitter, and Instagram.

About Hop Chockers IPA
In Aussie, “chockers” means very full, and Hop Chockers IPA delivers on what it promises: hops! This well-balanced IPA is brewed in collaboration with New Seasons Markets for their birthday. Hop Chockers IPA slaps you in the face with the aromas of peach, fruit punch, lime zest and chardonnay from the plethora of Northwest, New Zealand and Australian hops, including the newest Aussie hop: Enigma. Two types of Rye malt and Crystal malt lend a pleasing spiciness and caramel flavor that finishes with a moderate bitterness and lingering fruity flavors. Prost!

About Widmer Brothers Brewing
Widmer Brothers Brewing helped create the Pacific Northwest craft beer movement in 1984 when founders Kurt and Rob Widmer, then in their 20s, began brewing unique interpretations of traditional German beer styles. In 1986, Widmer Brothers Brewing introduced the original American-style Hefeweizen, which elevated the brewery to national acclaim. Since then, the brewery’s iconic Hefe, which celebrates its 30th anniversary in 2016, has grown to become Oregon’s favorite craft beer. For more than three decades, Widmer Brothers has continued to push the boundaries of craft beer, developing a variety of beers with an unapologetic, uncompromised commitment to innovation. Based in Portland, Oregon, the brewery currently brews a variety of beers including Hefeweizen, Upheaval IPA, Steel Bridge Porter, Drop Top Amber Ale, and a full seasonal lineup. Additionally, the brewery continues to make a series of limited edition, small-batch beers available in Oregon and at the Widmer Brothers pub in North Portland.

About New Seasons Market
New Seasons Market is a West Coast neighborhood grocer with a people-first culture that builds and sustains relationships for the greater good. A champion of the regional food economy, it partners with farmers, ranchers and producers to deliver the best of the region and pairs local, organic favorites with grocery classics to offer customers choice, value and flexibility. The world’s first certified B Corp grocery store, New Seasons started with a single store in Portland, Ore., in 2000 when three families and 50 friends united over shared values. Together with its 3,300 plus welcoming staff members, New Seasons offers a unique retail experience in which communities come together to realize the potential of a healthy, sustainable food system. New Seasons has 18 neighborhood stores in Washington, Oregon and California, as well as five New Leaf Community Market locations in Northern California, and commits 10% of its after-tax profits back to the communities it serves.