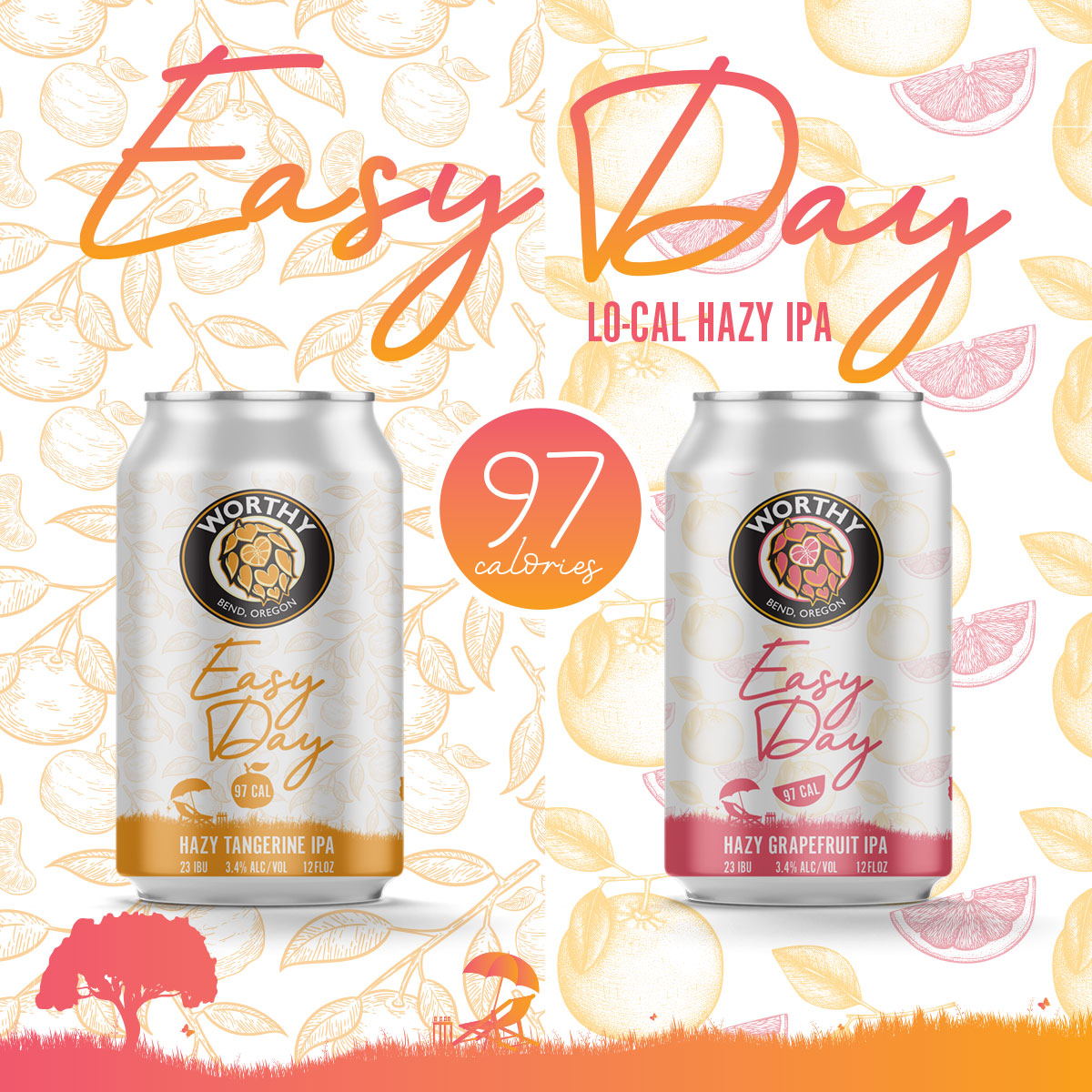 Worthy Brewing to join other craft brewers to launch its own line of low-calorie beers under its Easy Day moniker. First up will be Easy Day Hazy Grapefruit IPA and Easy Day Hazy Tangerine IPA, both packaged in 12oz cans. The Bend brewer also announces plans for its Heart & Soul Beer Series with weekly releases each Friday throughout the year.

In a press release, similar to ones from Stone Brewing of yore that disavowed yellow fizzy beer, Worthy Brewing provided one where the brewer has taken a hard stance on producing hard seltzers.

“The craft beer campaign arose in response to the market domination by a few massive beer companies, who spun out virtually the same insipid yellow fizzy water,” said Dustin Keller, Worthy’s Master Brewer, in a statement. “Our mission has always been to explore as many beer styles as we can, and even create a few new ones. Whatever the style, we’re going to brew it with natural ingredients sourced locally and served fresh with a Worthy twist.”

To offer a beer that the brewery feels will compete with the popular and ever-growing market of hard seltzers, Worthy Brewing is now offering up two new low-calorie and lower alcohol beers. Worthy is resurrecting the Easy Day name in order to launch an Easy Day low calorie, low alcohol, fruited hazy series. The alcohol content will dip under 4% and the calories under 100, without the use of any extracts or artificial flavors. The first two Easy Day packaged hazy IPAs will be Easy Day Hazy Grapefruit IPA and Easy Day Hazy Tangerine IPA.

“Next up is a smoky dortmunder lager that utilizes local Mecca Grade pilsner malt, which was malted during the Lionshead fire this summer – real smoke flavor! – plus we added lemon zest sea salt because why not, 2020 has been a crazy year. This Winter we will focus on small batch barrel aged beers, beginning with a bourbon barrel aged imperial Porter and continuing with a variety of wine and spirit barrel aged offerings.”

“And we’re continuing our intrepid exploration of the Hazys: big, small, juicy, fruity, we’ll brew ‘em all,” said Kellner, in a statement. “Our game plan is to brew a new beer every week for 2021 as part of our ‘First Sip Friday’ launches, available on draft at the pubs and to-go in 16oz aluminum crowlers.”

New releases from Worthy’s Hear & Soul series will be released each Friday at the brewery’s two locations, its brewery on the Bend’s Eastside and at Taps & Tacos located in Downtown Bend. Both locations are open from Wednesday to Sunday, from Noon to 8:00pm with draft beer to go filled per order in new 16oz cans. To manage your way through the pandemic, Worthy offers plenty of outdoor seating and standing around the firepit and heaters at both locations.