The dark, rich and chocolatey notes from Dark Muse became darker and richer. The residual bourbon delivers an “oh boy neck-snapping pow”. The oak secretes a soothing warmth. And the toffee, vanilla and molasses notes combine to generate a sweet licorice sensation.

“This is our biggest creation,” beamed Dustin Kellner, Worthy’s Brewmaster, speaking of his brewchild. “The passage of time and the lingering bourbon amped up the ABV to 11.3%, and yet the beer retains that silky smooth drinkability.”

So does Barrel Aged Dark Muse spark creativity? “I don’t know much about that,” laughed Dustin. “Our owner’s [the BGL] always going off about Aristotle’s weird theory that creativity springs from melancholia, an ‘ill humor’ that supposedly resulted from too much ‘black bile’ –which doesn’t sound very appetizing to me, but I’m a brewer not a philsopher. I guess Aristotle thought a bunch of ‘bile’ was the bedrock of creativity. Sounds awful to me.”

“I wouldn’t necessarily compare our barrel aged Dark Muse to a pipe cleaner, if that’s where Roger’s going, but after a sip I can sort of feel the wheels inside my head move a little easier. Seems to knock off a bit of the rust.”

The blend that makes up Barrel Aged Dark Muse Russian Imperial Stout is 60-40, barrel aged to freshly brewed Dark Muse. This rare, gold, hand-dipped wax dipped beer sells for $16 a bottle. It’s aged, and it will continue to age well.

Naturally, this is a very small batch as the brewery hand-dipped each 22 oz. bottle in gold wax. Of the total 60 cases, Worthy is offering 30 cases to retailers in Oregon, 15 in Washington, and another 15 here at the pub.

For maximum liberation potential, the brewery recommend letting the aged stout breathe a bit in your goblet at room temperature, which will help bring out the warm bourbon booziness. 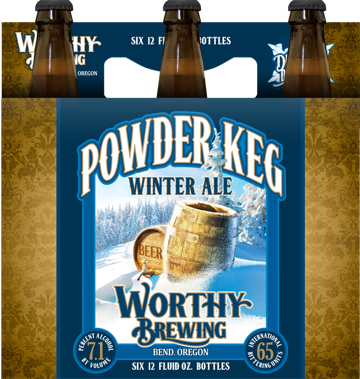 Also out in the marketplace is Worthy’s Winter seasonal beer, Powder Keg IPA. A winter warmer staple at Worthy Brewing since 2013, this red hued IPA is loaded with hop flavor and aroma with a festive piney and citrusy hop character. It’s balanced by a generous dose of crystal malts making this an aggressive yet balanced beer.

Powder Keg’s big without being heavy. It’s packed with an explosive amount of pure grade, highly volatile lupulin yellow cake, distilled from the ooziest of the oiliest Big C’s of Centennial, Cascade, Chinook and Columbus. ABV is 7.1% and 65 IBUs.