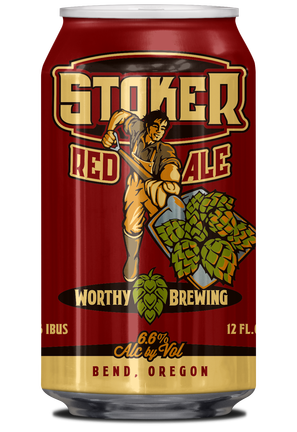 BEND, OR — Worthy Brewing is adding a fifth can to their line-up this spring. Introducing Stoker Red Ale, a hoppy beer designed to stoke your passions and keep them lit. Stoker Red will be available in 12-ounce cans this April.

Several months ago, Worthy made the hard decision to discontinue their Eruption Imperial Red. Brewmaster Dustin Kellner took this opportunity to create a more sessionable, judiciously juiced red inspired by its retired cousin.

For bittering, Worthy’s Brewers added Nugget and CTZ. For aroma and flavor, they added Oregon grown Cascade and Centennial Hops and topped it off with Mandarina Bavaria, a German hop whose mother is Cascade. The final numbers come in at 6.6% ABV and 66 IBU.

“What we wanted to brew was an easy drinking, hop forward red ale. Something that would be as refreshing from a can, as it would be from a glass. It’s always tough to be objective when drinking your own beer, but I think we nailed the style with Stoker,” said Kellner.

“Stoker is fuel for your firebox,” said Roger Worthington, Worthy Brewing’s Founder.  “It has a tantalizing tangerine aroma and a piney, lemonish flavor with a satisfying malt sweetness. It’s the perfect beer for star gazing around the campfire or holding court with friends and foes alike on the pressing issues of the day.”

The can features a swarthy brewer in his rubber boots stoking the kettle with a shovel piled high with big juicy hop cones.

Kegs and cans are distributed by Columbia Distribution in Oregon and Washington, Hodgen Distributing in Eastern Oregon, and by Hayden Beverage in Idaho.