Idunware Beer is a software that allows users to store information on beer, much in the same way as sites such as Ratebeer.com or BeerAdvocate.com.  As an off-line tool, Idunware, developed by Henrik Morell of Copenhagen, Denmark, allows users to access their own customizable beer notes without the use of the Internet.  This allows for private, non-commercial, and sortable beer data to be stored for use at anytime without fear of viruses or criticism.  Morell’s goal is to provide customers with the best products and service available and to make things easy and logical in the current technological era.  I spoke with the man behind Idunware to find out more and to garner an understanding of his appreciation for craft beer.

What is your interest in beer/craft brewing?

Henrik Morell: My interest is a curiosity for what a beer can be and how a brewery can have a special idea about the taste of a beer.

I’ve noticed there are a lot exciting breweries popping up in Denmark.  What are some of your favorites? 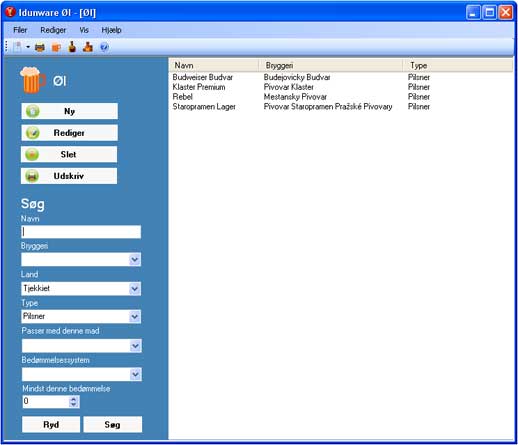 HM: I would mention: Bryggeri Skovlyst. If I should recommend some beers it could be the “Birkebryg” (with sap from birch) and the India Pale Ale. Ørbæk Bryggeri. It is an old and innovative small brewery from 1906 – just to mention that you don’t need to be young to be interesting.  GourmetBryggeriet (from 2005). The brewery has a high stable quality.

HM: Idunware Beer is a personal tool and not a community tool. But of course it can be used as the notes you use to collect your opinion before it is shared with other people.

I think it is nice not always to be online: you could for example use it with a laptop on the beach with a cool bag full of craft beers. It can also be used among friends tasting beer together.

I think notes about what I have bought is a bit personal and don’t need to be published on the Internet. Moreover, I think the novice often would like to build up an experience before he or she likes to share it on the
Internet. The first problem is to remember the beer you have tasted.

What do you foresee with the success of this software?

HM: If people like and buy the software it will be possible to extend it with the features called for by the users. I hope to get a lot of input from the users.

Where does the name Idunware come from? Idun + (soft)ware. According to Nordic mythology, Idun was the custodian of the apples, which were believed to maintain eternal youthfulness.

If you were stranded on a desert island and could only drink one beer for eternity, what would it be?

For more information on Idunware Beer go to their website: http://www.idunware.com/