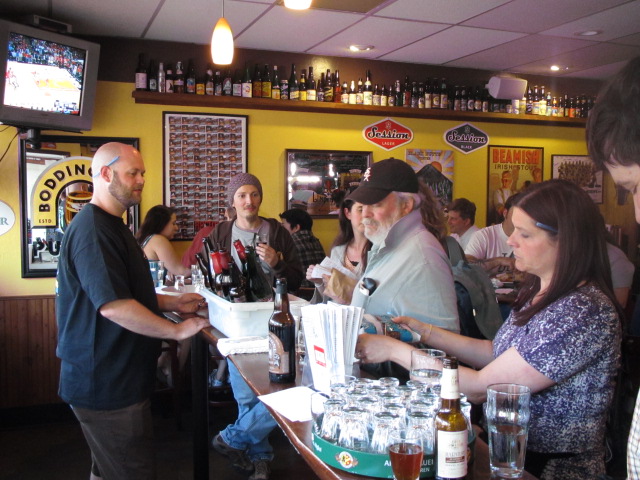 When it comes to great summer beers, or just great brews in general, a top destination to fulfill your warm weather wishlist is The Bier Stein in Eugene, Oregon. Crowned by Beer West Magazine as having the best bottle selection on the West Coast, it’s hard to argue with the fact that The Stein has remained a solid resource for some of the region’s best brews since opening in 2005. The shop not far from the University of Oregon campus houses more than 1,000 different bottles of craft beer and ten unique rotating offerings on tap. Further, The Stein’s owner in Chip Hardy not only sells the good stuff – he brews it.

A huge part of the vibe at The Bier Stein can be attributed to Dave Stockhausen, the manager of the joint who is as knowledgeable and passionate about craft beer as anyone in the business. Stockhausen runs much of the daily operations at The Stein and is to thank for the execution of much of Hardy’s wonderful vision. We pulled Stockhausen aside from his duties for a moment to get a recommendation on a splendid mixed sixer of brews he has recently shelved at The Bier Stein. Here’s six beauts approved by Stockhausen that you might want to snag before they’re gone:

1.Fire Mountain Tanline Summer IPA 22oz. – 5.2% ABV – Lighter side of IPA dominated by Pilsner and 2-Row malts, refreshingly hopped with Czech Saaz.
2.Maui Flyin’ HI.P.Hay 12oz. can – 6.8% ABV – Tribute beer to the late, great Glen Hay Falconer, using 100% “Falconers’ Flight” hop blend from Hop Union.
3.DogfishHead My Antonia 750ml. bottle – 7.5% ABV – Imperial Pilsner hopped in continuous Dogfish fashion with Noble and West Coast hops.
4.Stillwater/Mikkeller Our Side 750ml. bottle – 7.5% ABV- A collaborative Farmhouse ale packed with Piney, resinous hops, brewed by two of the world’s most unconventional brewers.
5.Reissdorf Kolsch 16.9oz bottle – One of the only true Kolsch’s available in the US, a must have on a warm afternoon.
6.Hopf Helle Weisse 16.9oz. bottle – 5.3% ABV – Classic Bavarian Hefe that pairs great with a variety of foods, including: Poultry, whitefish, and a multitude of veggies, Get that grill fired up!