This Sunday, February 22, the American Homebrewers Association is throwing a Rally in Ashland at Standing Stone Brewing Co. to celebrate the joys of homebrewing and connect beer enthusiasts in the area.

The event—which is southern Oregon’s first-ever AHA Rally—will feature a VIP tour of the brewery, beer samples, gifts, prizes and much more!

WHAT:  The American Homebrewers Association (AHA) hosts a series of AHA Rallies across the country to give homebrewers the chance to check out some of their local breweries and connect with other beer enthusiasts and homebrewers in their area. This upcoming AHA Rally will take place in Ashland, Ore. at Standing Stone Brewing Co. and offers the opportunity to take a VIP tour of the brewery, meet brewery staff, enjoy Standing Stone beer samples, and win great prizes from the brewery and the AHA.

Plus, Standing Stone will be organizing a Wort Give-Away, in which attendees will have the chance to take home five gallons of Standing Stone wort to use to ferment their own beer at home. In addition, all guests will take home a Rally-exclusive gift from the AHA. 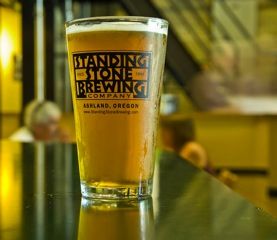 COST: Rallies are free for current AHA members. Non-members can join online, or sign up for a discounted member rate at the Rally. Please RSVP for the event.

About the American Homebrewers Association: