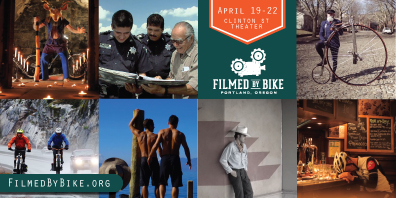 The 12th annual Filmed by Bike film festival features bike-themed movies from around the world. Love is born, races are completed and stories of two-wheeled adventures cycle across the silver screen in 45 very short films. Filmed by Bike will be held at the Clinton Street Theater from April 19-22, 2014 and benefits NW Documentary, a non-profit organization that helps people tell their stories through film.

“Filmed by Bike has grown into an international film festival that offers the Portland community an intimate glimpse of how people from around the world share our passion for riding bikes,” says Festival Director Ayleen Crotty. “Cycling crosses social, economic and cultural realms — Filmed by Bike is a platform for those stories and for celebration.”

New Belgium Street Party
On Saturday, April 19, the New Belgium Street Party opens the festival with a party in the middle of Clinton Street. The event is all ages and features a speed raffle, live entertainment, beer garden, video confessional storytelling booth, a photo booth and a gigantic bike parking area. “Filmed by Bike is the only festival in Oregon to truly put the FEST in festival,” says filmmaker Mike Vogel of Front Ave. Films.

Details
Showtimes: available on the website at FilmedbyBike.org
Cost: $8-$10 per show, $27 for an unlimited entry festival pass that includes a free DVD.
Age restrictions: All ages with the exception of Saturday 7 p.m. and 9 p.m. showtimes.
Tickets: Tickets are for sale at the event while supplies last.
Contact Info: FilmedbyBike.org or 971-221-7228