Brewpublic visited Hillsboro, Oregon known more as the Silicon Forest and its technological commerce than then its craft beer community. You are now likely familiar with Vertigo Brewing of Hillsboro who have been visible in the Portland craft beer community, pouring at fine beer establishments like Bailey’s Taproom, Saraveza, and the Horse Brass. But in Hillsboro, tech industries like Intel, Lattice Semiconductor, and EPSON seem to define Oregon’s fifth largest city more than the beer.

However, in recent years, more and more communities across the United States, and especially here in the Pacific Northwest are familiarizing themselves with handcrafted beer thanks to microbrewers like Hillsboro’s Ambacht Brewing. A member of the Oregon Brewers Guild for a few years has yet to make a splash in the Portland market, let alone that of Hillsboro. Yet,  thanks to recent developments, the unique 5-barrel brew house looks to become much more visible quite soon. 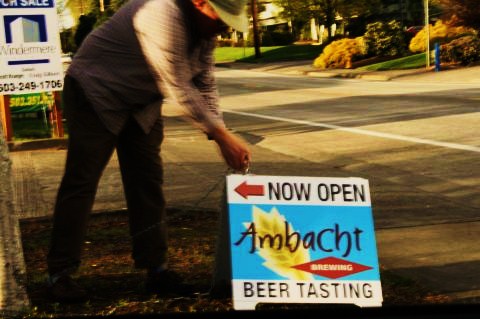 Ambacht is the vision and dream of brewer Tom Kramer. Kramer spent some time brewing at Tuck’s Brewery towards the end of their existence before the Southwest Portland brewery closed was sold to Congregation Kesser Israel across the street from the Mittleman Community Center. 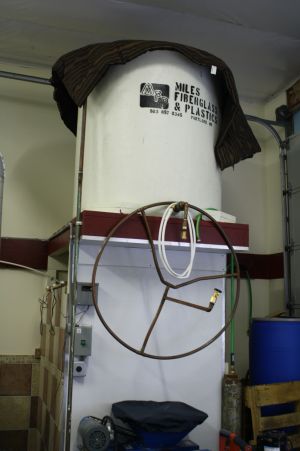 Kramer, who started as an Oregon Brew Crew member, began his journey in 1997 in parallel with his career as a professional beekeeper. After Tuck’s sold and brewer Max Tieger moved on to help open the Fanno Creek Brewpub in Tigard, Oregon, Kramer purchased the old brew system from the synagogue and moved his brewing operation to NE 25th Avenue just west of  Hillsboro’s airfield. 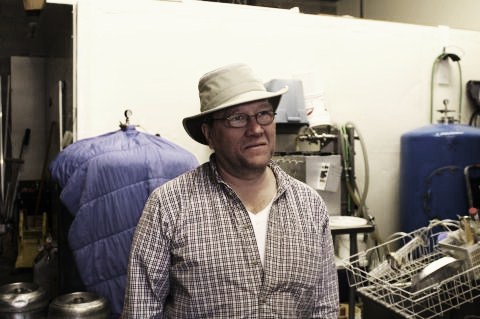 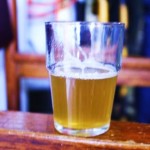 Ambacht’s beers are unique not only because they are all-organic, but they are also brewed using Belgian yeast and honey from Kramer’s other passion. Upon arriving at the industrial park brewery, we met the amiable Kramer fittingly donning a beekeeper hat along with a welcoming smile. Here at Ambacht’s facility, Kramer and his partner Brandy Grobart produce two mainstay beers for sale in 22-ounce bottles, Ambacht Golden Ale and Black Gold Porter. Both beers employ the same Abbey II Yeast (also known as Wyeast 1762) giving them both a fruity character aided by the use of honey for bottle conditioning. 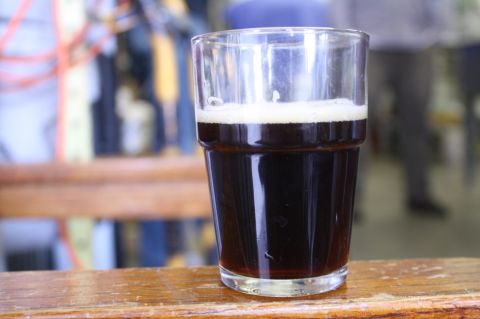 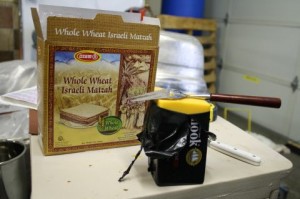 h word meaning “handmade” and seems like a fitting name considering that Kramer spend some of his life in the Netherlands soaking in the rich culture there. His love for brewing extends beyond the simple recipes of standard Northwest brewers. This is evident in some of his other recipes that we were able to try upon our visit. Since acquiring his system, Kramer has produced a distinct “Matzahbrau,” using Matzah (or Matzo), a cracker-like unleavened bread made of white plain flour and water. It is the substitute for

bread during the Jewish holiday of Passover, when eating bread and leavened products is not allowed. Two pounds of Matzah is used in a 20 pound grain bill for this brew. Another interesting beer is one Portlanders can try soon at the Cheers to Belgian Beers Festival (PCTBB) on May 1st at Hopworks Urban Brewery. Styles for this event were chosen by brewers tossing darts at a dart board. Grobart, representing Ambacht nailed a bullseye on his throw, meaning the brewery could choose any style of their liking. A dark, medium-bodied Saison was the verdict. This 6.8% farmhouse ale, also using honey, promises to be one of the more unique offerings at PCTBB. You can also experience Ambacht’s beer at this years North American Organic Brewers Fest (NAOBF),  June 25-27 at Overlook Park. We look forward to seeing and tasting more from these folks soon! 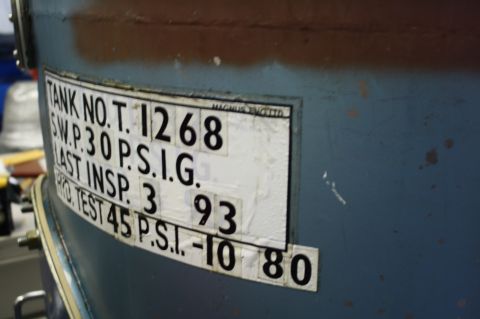 For more information on Ambacht Brewing, visit their website at http://ambacht.us/