Most craft beer geeks are familiar with the beers of Stone Brewing Company. Since 1996, the San Diego area brewery has been challenging beer drinkers to expand their idea of what beer can be. With statements like “Fizzy yellow beer is for wussies,” Stone’s repertoire of brews often runs well above the average alcohol by volume standard set by the vanilla macrobreweries. Though their sharply hopped IPA and Pale Ale are considered Stone’s flagship beers, it is perhaps their Arrogant Bastard Ale that has captured the intrigue and dominated the palates of innovation within the burgeoning craft beer uprising. This American strong ale makes the statement to consumers on the bottle that “You’re not worthy.”

A combination of brilliant marketing, sharp imagery, and risk-taking recipe development has been a proven formula for success for Stone. Instead of yielding to the idea that compromise is necessary to lure in leary-palated beer consumers, Stone has always operated on the philosophy of simply making the bold and robust beers that they like to drink, and in return, a huge following of dedicated followers has emerged.

In 2006 Stone moved from a modest industrial park brewery (now home of Lost Abbey Brewing) in San Marcos to an expansive custom-designed facility in Escondido. The new location currently has a capacity of more than 70,000 barrels per year, with capacity expandable up to 250,000 barrels, and includes an on-site bottling line. The new location also features a restaurant known as Stone Brewing World Bistro & Gardens, a 300+ seat establishment which features a large outdoor patio and 1-acre gardens. Here, Stone serves a rotating menu of food—concentrating on organic, free-range and local ingredients—and beer from Stone, local San Diego and regional California craft brewers, and other specialty breweries in the United States and abroad. The brewery also houses a “Stone Company Store” where Stone merchandise can be purchased in addition to 2L and 1L growlers which can be filled with Stone’s seven year-round beers and special releases.

In June 2008, Stone Brewing became improved their eco-friendly approach when they lined their brewery roof with solar panels. This is said to have cut their energy costs in half. According to the brewery, the 1,561 roof-mounted solar modules will offset more than 538,000 pounds of carbon emissions over its lifetime, which is equivalent to planting 204 acres of trees. 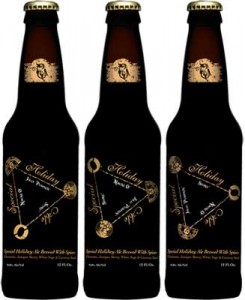 On top of all this, Stone has been a regular champion of Beer Advocate, repeatedly voted by readers and contributors as the best brewery on the planet. And it’s easy to see why. With touted release offerings like the Vertical Epic line-up which sees a new style released each year from 02-02-02 through 12-12-12. Collectors and connoisseurs have been known to pay a pretty penny for past vintages from this series on sites like Ebay. In addition, Stone has been eager to work collaboratively with brewers from around the world like Nøgne Ø of Norway, BrewDog of Scotland, Mikkeller of Denmark, and several well respected American breweries such as Dogfish Head (Delaware), Victory (Pennsylvania), Firestone Walker (Paso Robles, CA), Maui Brewing (Hawaii), and Jolly Pumpkin (Michigan).

Recently, Stone co-founder Greg Koch visited Portland, Oregon to investigate America’s craft beer mecca. Here Koch made appearances at a variety of brewpubs and craft beer bars around the city while hosting events at Belmont Station, The Eastburn, and Concordia Ale House. Brewpublic met up with Koch at The BeerMongers for an exclusive two-part interview. In this interview, we learned much about the brewery, and the man behind its collective vision.

Stay tuned for part two of this exclusive video on Brewpublic.