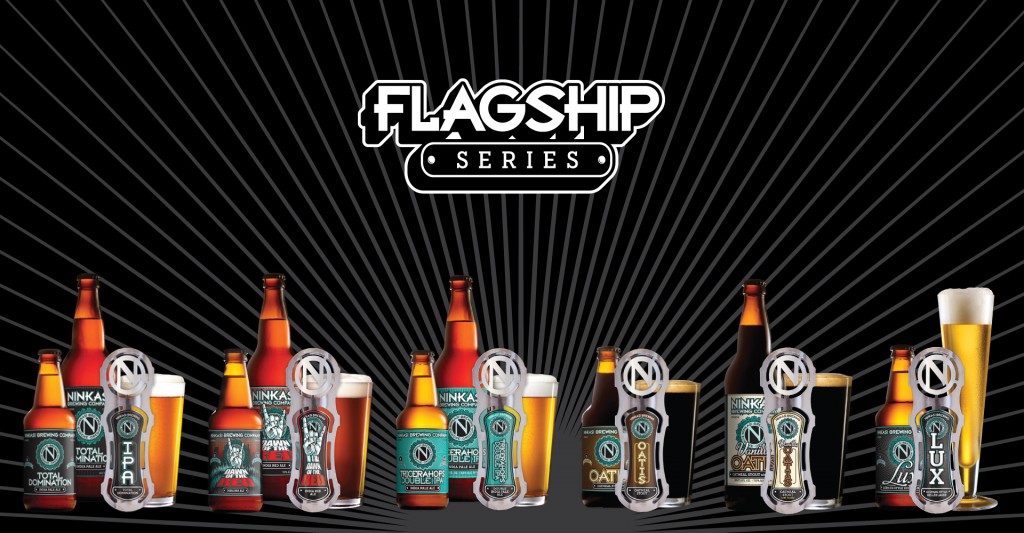 Starting next year, two beers will be added to the Ninkasi Brewing “Flagship Series” and will be made available year-round in all Ninkasi distribution areas. Lux, a German-Style Helles Lager, and Dawn of the Red, an India Red Ale, will join Total Domination IPA, Tricerahops Double IPA, Oatis Oatmeal Stout, and Vanilla Oatis Oatmeal Stout with Vanilla.

Below is the press release below as well as a video with founding brewmaster Jamie Floyd:

Released in 2014 for limited times, Lux, a German-Style Helles Lager, and Dawn of the Red, an India Red Ale, won the admiration of beer drinkers, giving the brewery reason enough to bring on the beers full-time to its year-round Flagship Series. In 2015, these beers will join the Flagship Series lineup alongside Total Domination IPA, Tricerahops Double IPA, Oatis Oatmeal Stout, and Vanilla Oatis Oatmeal Stout with Vanilla.

“The 2015 Flagship Series offers something for every palate,” says Jamie Floyd, founding brewer and co-founder of Ninkasi. “With these six different beers you will find our very first recipes paired with beers that were created out of our desire to experiment and challenge ourselves as brewers.”

Total Domination, IPA
In 2006, founders Jamie Floyd and Nikos Ridge spent 18-hours brewing the very first batch of Ninkasi beer. The result? Total Domination IPA – a citrusy, floral IPA and a testament to Jamie’s love for Amarillo and Crystal hops. With a great malt backbone and fresh, citrus hop flavor, this beer finishes with a desire to return to this favored IPA again and again.
Enjoyed Since: 2006 | OG: 1067 | IBUs: 65 | ABV: 6.7%

Tricerahops, Double IPA
Offering a double-dose of everything loved in an IPA, Tricerahops has acquired a cult-like following since it was first brewed in 2007. Offering a big, earthy, floral hop hit, this beer is balanced by a generous amount of malt, making for a very drinkable double IPA.
Enjoyed Since: 2007 | OG: 1080 | IBUs: 100 | ABV: 8.0%

Dawn of the Red, India Red Ale (Available February – December 2015)
Originally released as a Rare & Delicious (R&D) Series beer, Dawn of the Red was brewed out of a want to brew an IRA using new hop varieties. Using El Dorado and Mosaic hops, this beer has an intoxicating tropical flavor. Dawn of the Red immediately became so popular that it was advanced to Ninkasi’s Special Release Series. Once again, the fanfare for this beer was so great, that making it a new addition to Ninkasi’s Flagship Series was an easy decision, available year-round starting in February 2015.
Enjoyed Since: 2014 | OG: 1072 | IBUs: 75 | ABV: 7.0%

Oatis, Oatmeal Stout
Brewed in 2007 as the second winter seasonal produced by Ninkasi, a love for Oatis developed right away. Named after a brewer’s dog, the popularity of Oatis promoted its move from a seasonal brew to a year-round offering in 2008. This stout has a dry finish with a significant amount of roasted flavor upfront. Its smooth mouthfeel comes from the use of rolled oats paired with a caramel complexity and coffee flavors.
Enjoyed Since: 2007 | OG: 1072 | IBUs: 50 | ABV: 7.0%

Vanilla Oatis, Oatmeal Stout with Vanilla
A more decadent take on Oatis, Vanilla Oatis features the addition of whole Madagascar vanilla beans. During the brewing process of Oatis, a portion of the beer is set aside in the brite tanks where hand-cut vanilla beans are added – the same process used to dry-hop a beer. This addition of pure vanilla acts as a natural sweetener, adding a more roasted flavor upfront followed by a vanilla finish.
Enjoyed Since: 2009 | OG: 1072 | IBUs: 50 | ABV: 7.0%

Lux, German-Style Helles Lager
Meaning light in German, Lux is Ninkasi’s lightest Flagship Series offering. Capturing the traditional and technical balance of the style, this Helles Lager has a toasty malt flavor balanced by the smallest amount of hops to bring about a quaffable drinkability. Allowed to ferment for a minimum of six-weeks, Ninkasi’s brewers accepted the challenge of producing a lager to the highest standards of balance.
Enjoyed Since: 2014 | OG: 1050 | IBUs: 20 | ABV: 5.0%

About Ninkasi Brewing Company
Founded in 2006 by Jamie Floyd and Nikos Ridge, Ninkasi Brewing Company continues to grow from its first batch of Total Domination IPA, to two brewhouses, a 55-barrel and a 90-barrel brewhouse, located in Eugene, Ore.  Ninkasi’s Flagship beers are sold throughout Oregon; Alaska; Alberta; Arizona; California; Idaho; Washington; Nevada; and Vancouver, British Columbia. The brewery remains privately-owned and is committed to community support and giving. Ninkasi’s Beer Is Love program offers in-kind donations and support for organizations throughout its footprint.