The bottle and label design is quite appealing to any Timbers fan. The packaging features the Timbers axe logo on the bottle cap, Timbers Army seal on the side of the main label and 107ist seal on the neck label. The neck label states:

“We are RCTID. Each year the Timbers Army and 107ist host a homebrew competition, bringing out the best in what makes the Rose City great: craft beer, creativity, and a passion for the green and gold. Timbers Army homebrewer Abram “Abe” Goldman-Armstrong’s recipe was chosen and brewed by Widmer Brothers for you to enjoy as you cheer on your Timbers. Pints up Portland” 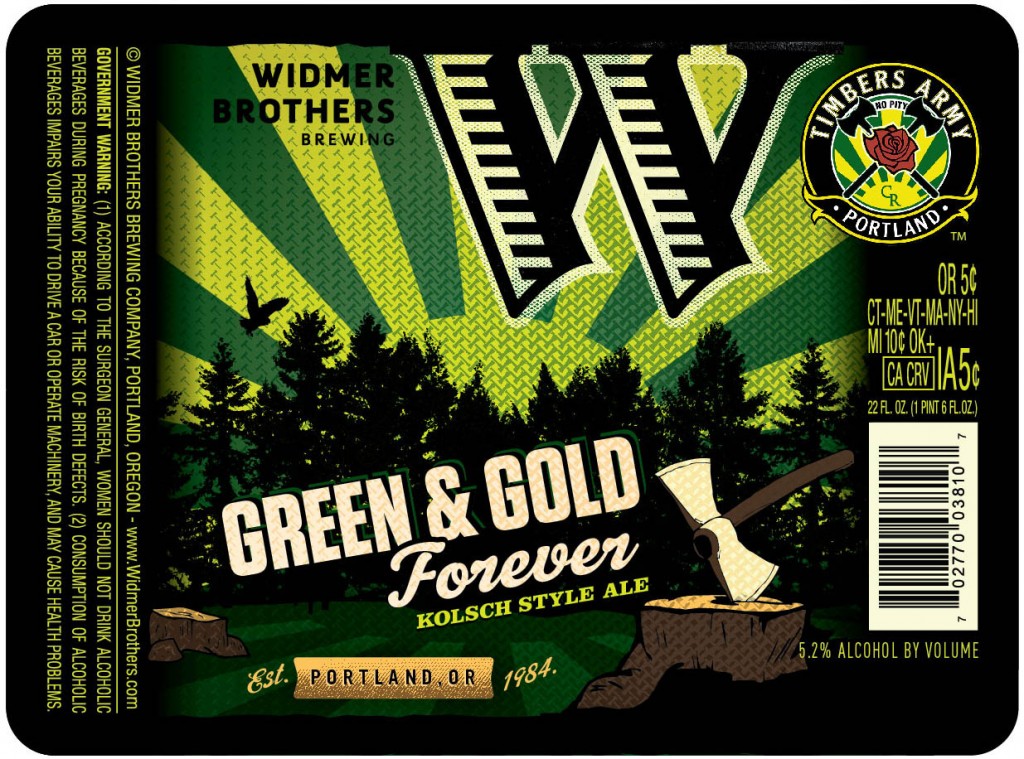 Well-known Timbers Army member Goldman-Armstrong originally brewed Green & Gold Kölsch for the 2012 Timbers Army Homebrew Competition in its third year. Inspired from Abe’s trip to Cologne, Germany during 2006 to catch the World Cup he recreated this style and entered it into the Timbers Army Homebrew Competition. His beer was chosen as the “Full 90” winner. This allowed him to assist in re-developing the beer with Widmer Brothers for large-scale production. In order to get this transition as accurate to his original homebrew recipe, three test batches were produced at Widmer’s Rose Garden facility on their 10-barrel system. This recreation of Abram’s original homebrew recipe even allowed him to add some of his own backyard grown Hallertauer Hops to the brew.

The results of Green & Gold Kölsch is a beer of pale, golden straw color with subtle spiciness of cracked black pepper followed by a crisp dry finish from the Kölsch yeast.

Green & Gold Kölsch will be available for the duration of the Timbers 2013 season in 22 ounce bottles and on draught with its own special Timbers Army tap handle at pubs and restaurants in Oregon and Southwest Washington.