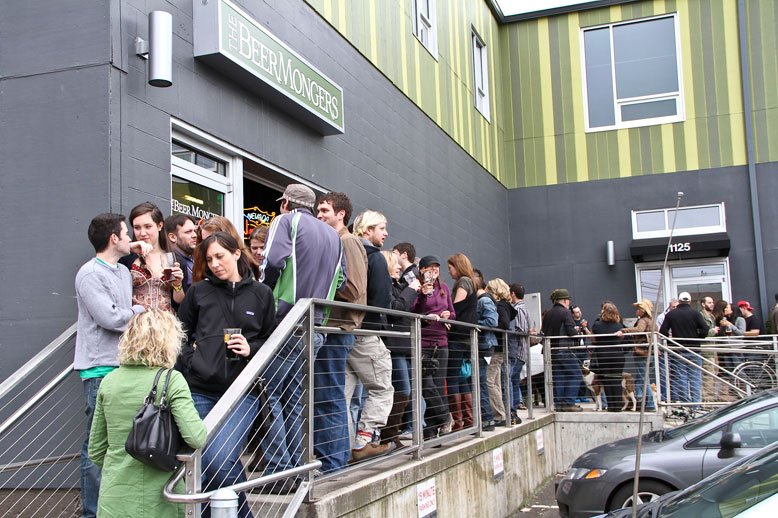 That’s the concise summation of our second annual SE Division Street Meet the Brewer Pub Crawl (BrewPubliCrawl). It was an event whose cup runneth over with amazing beer and a lot of cheer. The 28 Oregon brews seemed to taste even better because we met their brewers and heard the first hand creation stories about these marvelous brews. It all went down on a wonderful, mostly sunny day that kept spirits high and made crawling and tasting event more enjoyable. What light rain did briefly fall, held off until about 5pm.

This event, like most craft beer events in our opinion, is about more than special beer, cool brewers and blessings from the weather gods – it was about the people that attend them. Events like this remind us that enjoying good beer also means enjoying the company of friends and family, meeting new friends, and hanging with the diverse group of people that show up both share the love of craft beer, and share a few laughs with friends new and old.

The crawlers proved to be a lively and diverse group. We met ages ranging from a group of young men celebrating a friend’s 21st birthday, to couples and groups of friends in there 60’s and 70’s. As expected, many hardcore beer geeks attended, but we were excited to also meet many who told us they were just beginning to learn about the bountiful universe of craft brews from Beervana and beyond. People came from as near as the immediate neighborhood — excited to have something happening close to home – and as far as Canada, the East Coast and Seattle — excited to be in town for a yet another PDX beer event. The mixed ages and types of people really made this, like many beer events, something special. So thank you to all who attended! 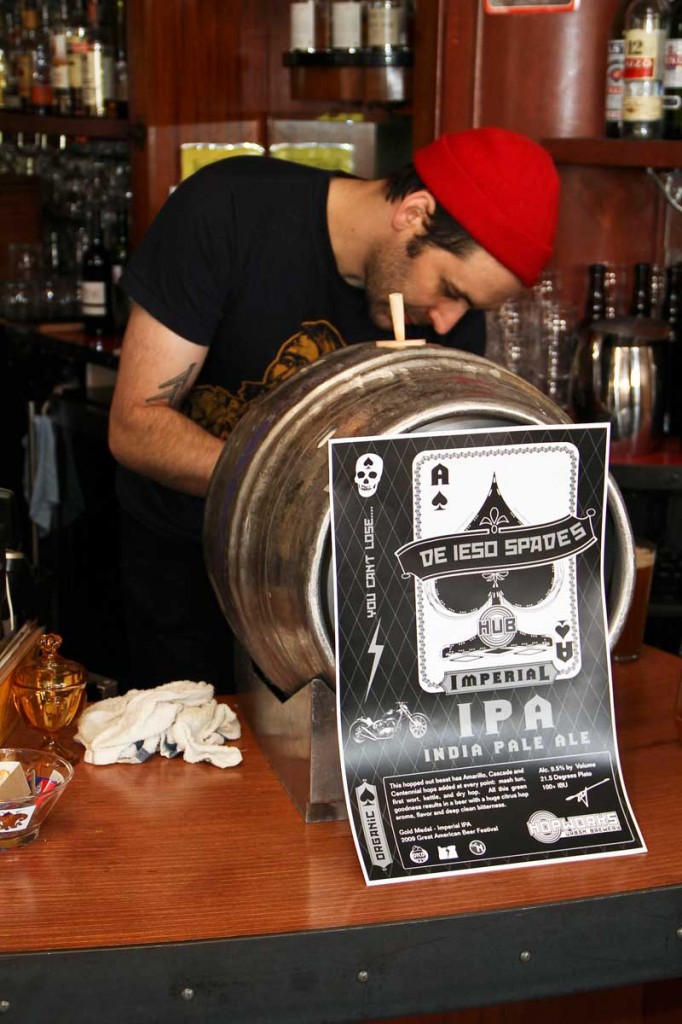 We were pleased and impressed that the first stop (beginning at noon at Victory Bar] had a huge turnout. Our staff were still counting tokens and deciding on event guide placements when crawlers started rolling in. Owner Yoni Laos had his hands full but kept things pouring smoothly as the line formed and tokens were exchanged. Hopworks brewer Ben Love surprised us with a special crawl offering dedicated to Brewpublic editor Angelo De Ieso called the “De Ieso Spades”, a firkin of their gold medal winning seasonal Imperial IPA release “Ace of Spades.” While we didn’t have a chance to sample them all, we heard great things about all the beers. Perhaps an unofficial crowd favorite was Double Mountain’s Red Light District, a special creation by co-founder Charlie Devereux for the Hood River brewery’s recent 4-year anniversary. 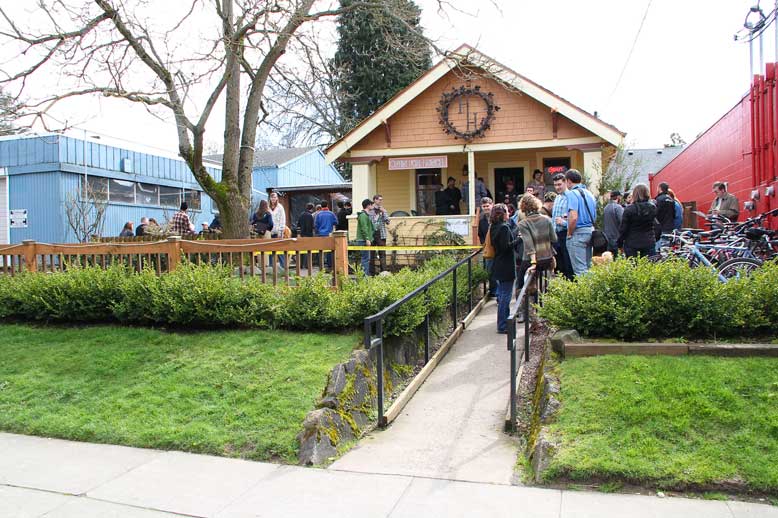 The sun broke through in full force in time for the second stop (1:30 – 3:00pm at Lompoc’s Hedge House), which was a perfect climate for lounging on the Hedge House’s front lawn, porch and outdoor seating area. Many crawlers grabbed a bite to eat at this stop and soaked up the sun while enjoying Lompoc’s two special crawl beers, Crazy Dave’s Bourbon Barrel-aged Imperial Stout and Dagda Irish Red, as well as some choice offerings from the brewery’s regular draft lineup. 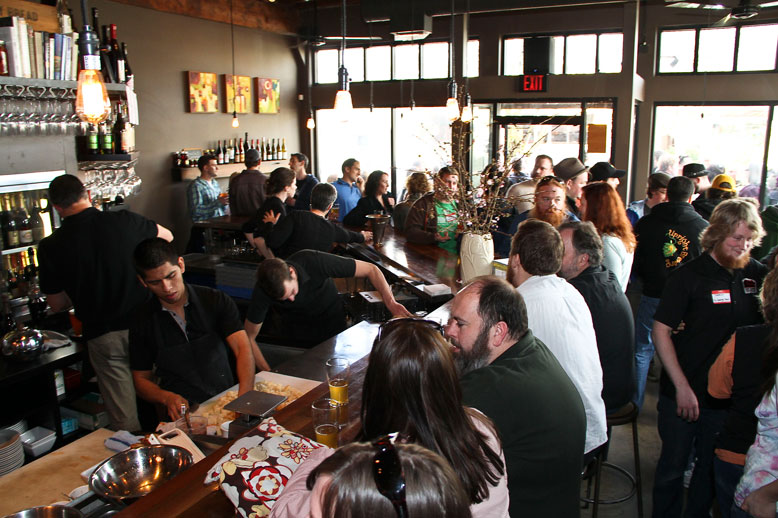 The line formed outside the third stop (Bar Avignon, 3:00pm) quite early. Owners Randy Goodman and Nancy Hunt and their staff wisely had many pints pre-poured and were ready to quickly serve the wave of crawlers. The weather (and relatively limited amount of indoor seating) drove people to the sidewalks, where crawlers soaked up a little more sun and watched the Division Street traffic pass by while in turn watching the crawlers. Before the stop was over, Full Sail brewer John Harris announced that his quarter-barrel of cask-conditioned Hop Pursuit had already blown. The thirsty crawlers were undoubtedly loving the cask pours of this refreshing, hoppy brew which made its debut here at SE 22nd and Division.

The fourth stop, (The BeerMongers, 4:30pm), brought a loud party atmosphere for crawlers standing shoulder to shoulder in the bottle shop/bar and outer sidewalk seating area to enjoy two different brews each from Block 15 of Corvallis, Barley Brown’s Pub of Baker City, and Migration, a favorite local brew haunt.  We did a raffle at this stop, with Angelo announcing winning ticket numbers over the Hopworks megaphone while excited winners fought through the crowd to claim their Brewpublic shirts, pint glasses, brewer sweatbands, and other brewery gear.

The fifth and final stop (Blitz Ladd, 6:00pm), had what appeared to be a near-capacity crowd before the crawlers even arrived. The Portland Timbers soccer season opener, pre-Blazers game partiers, March Madness fans, and a bustling private party all contributed to having the place rocking before the hundreds of crawlers even showed up. While seemingly overwhelming at first, it was a prime opportunity for some new patrons to take part in the crawl’s closing ceremonies and taste some of the great microbreweries’ offerings not normally pouring at Blitz (or most choice beer bars for that matter). We spoke with many patrons who hadn’t heard of Southeast Portland nanobrewery Beetje, newcomers Burnside (though brewer Jason McAdam is well known for his past brew work at Roots Organic Brewing), 10 Barrel (rapidly growing and Bend brewery), Flat Tail (Corvallis, Oregon’s newest brewery with a range of esoteric and traditional styles) and others, and were stoked to sample them. In addition to housing the most people along the crawl, this stop had the most beers on tap and the most brewers in attendance. The special crawl beers were poured from the main tap lines and from jockey boxes (thanks to Maletis Beverage) that were setup for the event. The setup provided more of an authentic beer festival atmosphere to this stop. The standing area near the jockey boxes turned into a great spot to meet and greet the multitude of brewers on hand for this event (and those from other events who came to continue the revelry and talk with their industry peers). In fact, wandering through this area at times felt like an industry or brewers convention of sorts.

By the event’s end, the Brewvana Brewery Tours bus loaded up some crawlers (many who amazingly made it through the whole 7.5 hour event), the Timbers had been defeated in their first Major League Soccer match, and the crowd began to dissipate. The brewers and crawlers said their goodbyes and our exhausted staff headed out for a late dinner to begin talking about our next events and our vision for improving BrewPubliCrawl in the future.

This event could not have happened without the support of many, many wonderful businesses and individuals in the craft beer community. We would like to offer our sincerest, heartfelt thanks to the 5 bars, 21 breweries (and their talented brewers), event sponsors (Full Sail, Hopworks, Laurelwood, Maletis Beverage brands including Southern Oregon Brewing, 10 Barrell, Widmer, Ninkasi, and Fort George), event volunteers and especially the diverse group of pub crawlers who made this truly a special day to remember.

Have fun at crawl? Got a good story? We’d love to hear about it in the comments below.