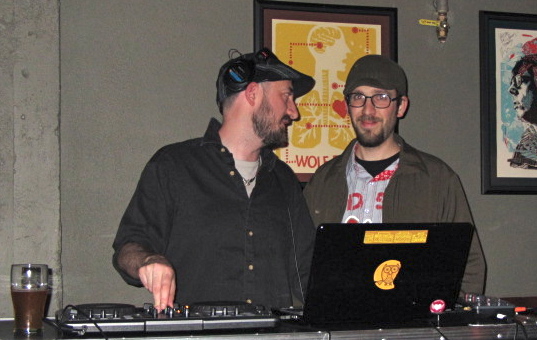 UPDATE: This event has been rescheduled. The Ave. of Roses isn’t quite prepared for the level of rocking the Brewpublic distribute. We will now be rocking on Friday, August 12th instead.

Now, for something different. Catch Brewpublic co-founders Angelo (aka DJ DeBeers the Diamond Kutta) and Aaron (Miracle Miles), on Wednesday July 13 at the Agenda on 2366 Southeast 82nd Ave. (the Avenue of Roses) at SE Division St. Our musical palates are like our beer palates. We’re men of many musical tastes, but we’re going to rock out on this one: some garage, psych, surf, classics, 80’s, adventure metal, and other random goodness. We’ll try and hook you up some special beers, or beer specials too.  The plan is to start around 8pm and go until midnight. Oh, and there’s free pool on Wednesdays at the Agenda too!

A lesser known bit of Brewpublic trivia: before they launched this little cyber -beer-republic, Angelo and Aaron met at KPSU radio station where they each served as staff members and had a way too much fun at industry conferences. They also each hosted their own radio show, and sometimes co-hosted each other’s shows and DJed around town. A revival of this musical, beer loving collaboration has been a long time coming and we will kick off what we hope will eventually be world-wide beer bar and brewery tour, providing musical ambiance for to quaff a quality pint to.

Why the Agenda you may be wondering? 1. The Agenda, (formerly the Steinhous), has been newly refreshed by the guys behind Roscoe’s, so it’s already become way more awesome. 2. They have metal bands on weekends. 3. They have a good (and loud) soundsystem. 4. And when we ran into the Roscoe’s fellows at the Fort George takeover night last week at Apex, they said actually said yes to our crazy idea!

Here’s some stats about the Agenda we pulled from Barfly Mag:

All pints (including micros) $2, 3pm-8pm, Monday-Saturday.