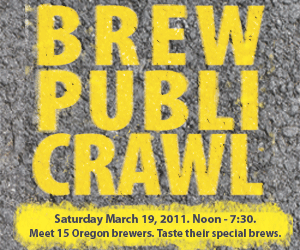 The beer lineup for this year’s SE Division Street Meet the Brewer BrewPubliCrawl includes 27  killer beers from 21 Oregon breweries. Brewers from most of these breweries will also be at the crawl. You can also download this list on our Event Guide (pdf file). Find more event details on our events page. We hope to see you crawling with us this Saturday!

Beetje Blonde Beetje – A dry, sessionable blond ale. The clean pilsner base is layered with a dash of Golding and Sterling hops. A dose of Lambic blend and oak chips in secondary add some complexity and a hint of funk

Bourbon Barrel Aged Crazy Dave’s Imperial Stout – Brewed in November 2009 and aged in bourbon barrels for over a year. It is pitch black in color with hints of chocolate, coffee, and bourbon. 8.0% ABV

Dagda – A Pan-Gaelic Red Ale that has a malty body with caramel flavors and a touch of smoke with a tart finish. 6.0% ABV

Upright Five – A farmhouse pale ale that was born after enjoying a few small production European brews that use a heavy hand of hops.

Barley Brown’s TankSlapper DIPA – Originally brewed for their 10th Anniversary, this is a hop monster. It could give you a head shake.

Migration Clem’s Cream Ale – Light on the hops, big on the flavor this blond ale is made with oats which lend to the beer’s smooth creaminess.

Beetje Brewing Flemish Kiss – A Northwest pale ale base with a dose of Brettanomyces Bruxellensis.

Laurelwood Organic Pale – A certified organic Northwest Pale released for Laurelwood’s 10th Anniversary and available here outside the brewery for the first time.

Coalition Wu C.R.E.A.M. – The Wu Cream ale is a light, malt forward beer with low bitterness. Flaked barley is added to give the beer a soft mouthfeel to complement the sweetness of Munich and honey malt

Burnside IPA – Burnside IPA is a very balanced and drinkable IPA with subtle notes of pine and grapefruit in the nose.