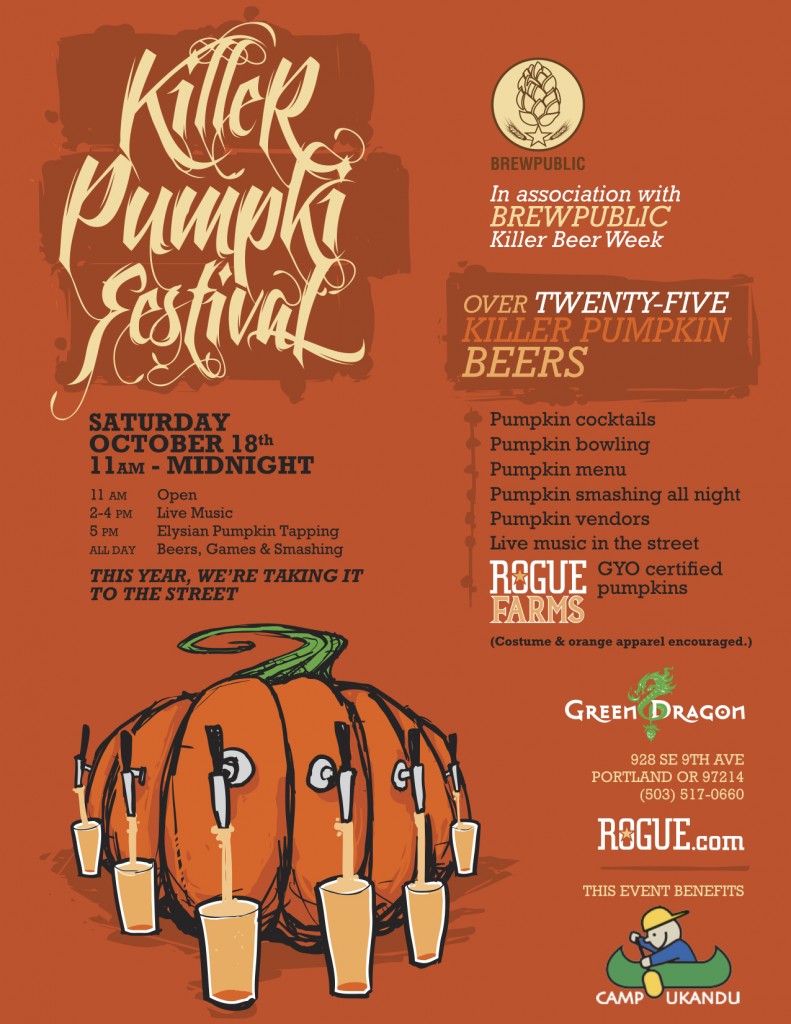 We are happy to announce another year of our annual Killer Pumpkin Festival returning to Green Dragon on Saturday, October 18th as part of Killer Beer Week. Yes, it’s that time of year for pumpkin beers and we’ve got plenty of pumpkins for pumpkin smashing, pumpkin bowling and other fun games. And the folks at Green Dragon and Rogue have come through on offering Portland the largest selection of pumpkin beers imaginable. The lineup on Saturday will feature over 45 pumpkin beers being poured throughout the day. This is gonna be one Killer Day!

Activities begin at 11:00am with live music from 2:00 to 4:00pm that is followed by the highly anticipated Elysian Pumpkin Tapping at 5:00pm. This is when Elysian Brewing Capitol Hill Brewer, Kevin Watson and local Elysian representative David Chappell will tap a gigantic gourd full of a special Elysian pumpkin beer for all in attendance to share.

Expel every last bit of your pent-up energy by furiously bashing a GYO Rogue Farms pumpkin with a sledge hammer for the low price of $1.00 per pumpkin. As the guts of this unfortunate gourd spray everywhere and all over you, you can remind yourself that this is for a good cause. All proceeds raised from pumpkin smashing goes to Camp Ukandu, a summer camp for kids with cancer. So bash that pumpkin in, and bash it good. Once you’ve got it all out of your system, grab a drink, you earned it.

Throughout the day Green Dragon will tap over 45 incredible pumpkin beers, including Rogue Ales, Buckman Botanical Brewery, Elysian Brewing, 21st Amendment Brewery, Laurelwood Public House & Brewery, Oakshire Brewing, Fort George Brewery and oh so many more. Below is the list of Pumpkin Beers that will be pouring throughout the day:

Pair your brews with a pumpkin menu or try a pumpkin cocktail instead. Killer Pumpkin Fest is family friendly so make sure not to leave anyone at home.

Kids and dogs are welcome too. So let your kids make a mess on SE 9th ave! They can paint and decorate pumpkins for $3 and all donated money will be going to Camp Ukandu. Killer Pumpkin Festival is a benefit for Camp Ukandu with a suggested donation of $5 at the door. Last year the crowds were large and a fun time was had by all.

Keep up to date on Killer Pumpkin Festival by following the event’s Facebook Page.