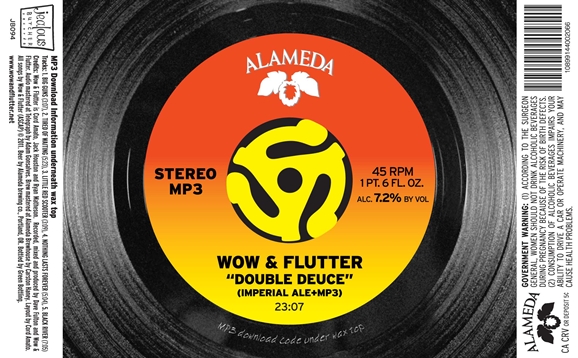 In the past we’ve encouraged contributors in the craft brew scene to take beer pairing to a new frontier – music. The interplay of a choice libation coupled a favorite tune can exponentially bolster the overall experience. Recognizing this phenomenon, a well known local brewery an accomplished Portland indie-rock outfit and record label to bridge the gap between two of life’s finest art forms.

Wow & Flutter of Portland is releasing an mp3 EP entitled “Double Deuce” in conjunction with Alameda Brewing‘s latest brew, Double Deuce Imperial Ale. To be released on January 28, 2012, on local label Jealous Butcher Records, the latest W&F rocks five songs spanning over 23 minutes in what could easily be described as “intoxicating” garage as well as warped psyche punk. The three-piece has been making music since the 90’s, though they say their currently lineup consisting of singer/guitarist Cord Amato, drummer Jack Houston, and bassist/keyboardist/vocalist Ryan Matheson that has been in place since 2006, is their most solid yet. Houston himself is directly involved with the regions burgeoning craft beer community. He is co-owner of Green Bottling, a Portland-based mobile bottling company that has filled and capped millions of bottles of beer for breweries such as Full Sail, Southern Oregon Brewing, Lompoc, and, of course, Alameda, among many many others.

Alameda’s liquid accompaniment is a 7.5% imperial stout, according to Riot Act media intern Annie Ostrowski. A bold dark brew sounds like the perfect match for Wow & Flutter’s most recent exploration of their darker and heavier stylings.

The release party for “Double Deuce” is happening on January 28 at Kelly’s Olympian in downtown Portland, Oregon.