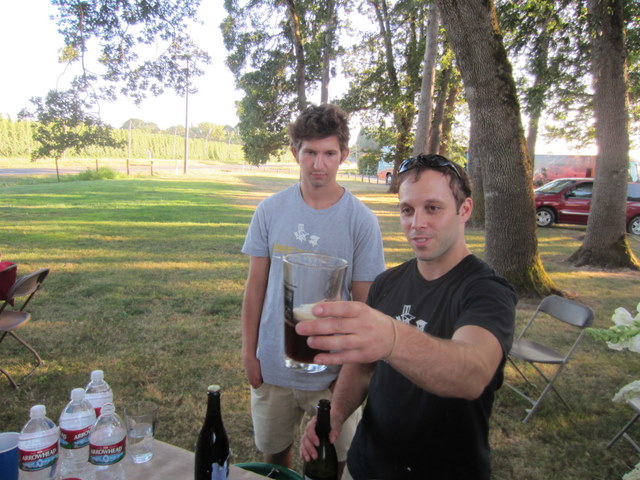 Ben Edmunds and the crew at Breakside Brewery continue to break new ground in the ways of expanding palates’ perceptions while pushing forth into new realms of craft beer. This time, Breakside’s continuing series of  of collaborative restaurant brews find the Portland brewpub delving into more imaginative domains and unleashing more interesting pairings. Three of what the brewmaster deems as Portland’s best eateries are featured to showcase each of the establishment’s characters. In addition, Breakside has announced the release of a new seasonal pumpkin ale sure to please your taste buds. Here’s the details from a recent press release received by us from the brewpub:

Breakside Brewery (820 NE Dekum) is excited to announce the next three beers in its yearlong series of collaborations with some of Portland’s top restaurants. Head Brewer Ben Edmunds has been working closely with the bar and kitchen teams at Pok Pok, Nostrana, and Aquariva to create beers to pair with each restaurant’s style of cooking. Coming in early December, the Pok Pok beer will be a dark lager modeled after international lagers such as Asahi Black and Beer Lao Dark. “Andy Ricker asked us to make a beer that follows his philosophy of cooking—simple and delicious—and wanted something that was spice-friendly as well,” said Breakside owner Scott Lawrence. Arriving in time for Christmas, Aquariva’s beer will be a blended, session brown ale that incorporates the herbs that Chef Andy Arndt uses in his dishes, such as bay and savory. For Nostrana, Edmunds and assistant brewer Sam Barber are working with owner Cathy Whims and bar manager Doug Derrick on a chestnut bock that will be available in mid-January. These three beers follow the release of the first beers in the series—an old ale for Wildwood Restaurant, a blended farmhouse golden for St. Jack, and a fest-style lager for Podnah’s Pit. These first three beers are still available at each of the restaurants, but they are selling quickly!

Next Thursday, November 17, promises to be an exciting day at Breakside’s Woodlawn pub. It marks the return of the brewery’s popular Imperial Pumpkin Cream Stout, and at 6 PM, the Breakside crew will tap the beer from two giant pumpkins. “This event was one of our most popular releases last year, and we’re excited to bring back the pumpkin stout,” said Edmunds. “We’ve tweaked the recipe and brewing process this year to make it more full bodied and upped the strength to 9% ABV; instead of traditional lactose, we decided to use coconut milk in the brewing process. The mix of pumpkin, spices, roasted malt, and coconut makes for a really wonderful dessert beer,” he added. Expect an excited crowd for the free pours of the beer from the pumpkin as well as the regular release of the beer on draught.