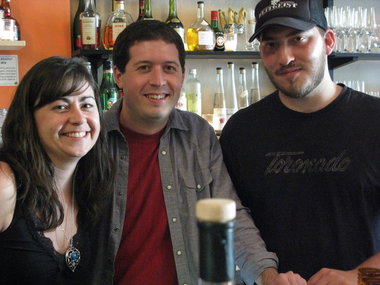 The trio behind Brewing Up Cocktails is excited to announce the release of a series of collaboration beers that it has brewed with Breakside Brewery, a recently opened Portland brewpub that has released numerous experimental and avant-garde 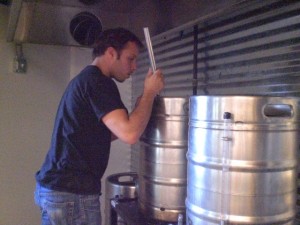 beers. For this year’s Portland Cheers to Belgian Beers (PCTBB) festival, mixologists Jacob Grier, Yetta Vorobik (also the owner of Portland’s The Hop & Vine bar), and Ezra  Johnson-Greenough teamed up with Breakside brewer Ben Edmunds to create three ‘cocktail beers.’ Each of these barrel-aged creations attempts to mimic a classic or contemporary cocktail using the same base beer, brewed with the Wyeast Trappist High Gravity yeast strain. Much barrel-aging focuses on taking regular beers and simply adding an additional layer of flavor from the barrel. These beers are different in that the beer functions as one component in the finished beverage, much like the way a spirit functions as the base of a classic cocktail.

The three cocktail beers are as follows:

1)      Breakside Brewer’s Bramble is based on the classic Bramble cocktail. Here, the base beer was added to an Old Tom Gin barrel along with blackberry puree, lemon peel, and crushed juniper berries.

3)      Breakside Whiskey Ginger was inspired by a cocktail from Portland restaurant/mixology mecca Beaker and Flask, called ‘Six Lengths Ahead.’ It is aged in a Whippersnapper Whiskey barrel, along with fresh ginger, blueberry puree, grenadine, and lime peel.

Edmunds will select which of the beers to enter to PCTBB as the festival gets closer. The other two brews, along with any remaining kegs of the festival entry, will be released at Breakside Brewery during special events in May and June.