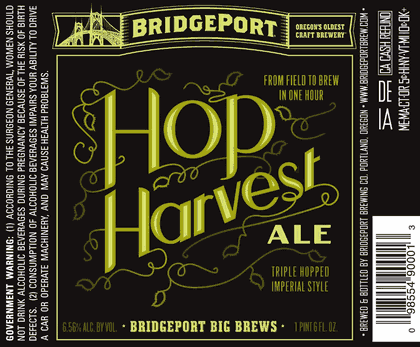 BridgePort Brewing Company, Oregon’s oldest craft brewery releases its 2010 Hop Harvest beer September 16th at the Pearl district brewpub. This year’s Hop Harvest features fresh Centennial hops from third-generation, family-owned Goschie Farms in Silverton, Ore. When announced by Gayle Goschie, farm head of Goschie Farms, the crop was ripe for harvest, BridgePort’s Brewmaster, Jeff Edgerton, and family, drove to the farm with utility trailer in tow. Armed with burlap bags, the group took to retrieving 400 pounds of fresh Centennial hops that were quickly sealed and loaded into the trailer for the drive back to the brewery. Within an hour, crews cut open the sacks and hops were blended with the base beer that had been prepared in advance and cooled to prevent cooking off the natural citrus and floral notes of the hops. Almost two weeks later, brewers lightly filtered the beer and filled kegs and 22-oz bottles with this farm-fresh brew.

BridgePort will host a Hop Harvest release party Thursday, September 16 at 5:30pm at the BridgePort BrewPub in the Pearl at 1313 NW Marshall St. Free and open to the public, attendees can be among the first to sample the new brew while supplies last and purchase a limited-edition 22-ounce bottle of Hop Harvest. Guests will also be given the opportunity to meet Gayle Goschie who, along with her brother, runs the certified sustainable and salmon safe Goschie Farms.