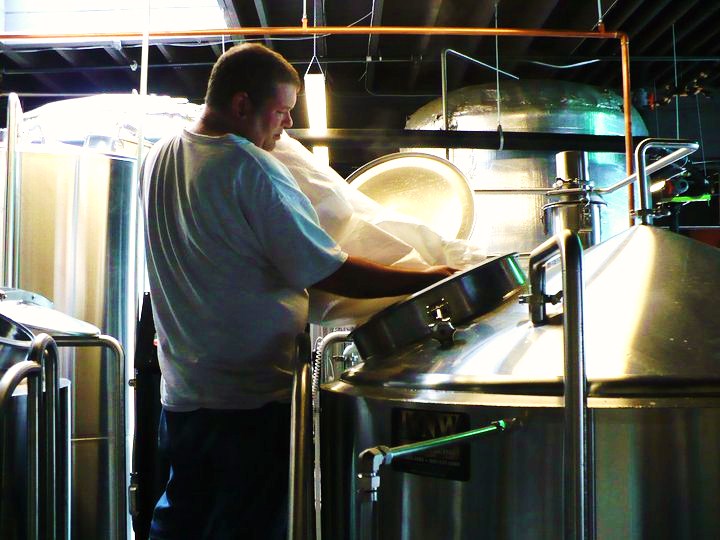 Last night was the opening of the Buckman Village Brewery – though I’m sure it will always be referred to as the Green Dragon Brewery – and it was a grand old time for the Green Dragon Pub. The opening brought out a full house, lots of local beer geeks and a local television reporter who could best be described as an artificial creature impersonating a human being. (The make-up they plaster on male television reporters is frightening stuff, really and truly something that should be reserved for Halloween. or the confines of a TV studio.)

Three new beers were available tonight, and the pub gladly offered tasters of all three beers to all pub patrons. This was a very nice, un-Rogue-like touch, and it allowed the curious to sample all three before deciding on a particular pint.

First up was the Buckman IPA which will probably become the brewery’s signature beer. It is a solid, quaffable beer with the clean citrus hop flavor that finds a lot of favor here in the Northwest.

I always compare any new IPA to my local favorite, Laurelwood’s Workhorse IPA. This beer is similar in some ways, though it lacks the sharp hop edge that makes the Workhorse such a tasty beer. It’s probably more similar to Amnesia’s Copacetic Ale, though it isn’t quite as finished, isn’t quite as refreshing as the Amnesia product. Just when you expect that slightly bitter flavor to dominate, to balance out the citrus taste, you get a softer, smoother, slightly malty finish. It’s a fine tasting beer, and it’s certainly drinkable, but a sharper finish would be much appreciated. I didn’t see any specs on the beer, but I’d bet that it came in around 55-60 IBUs, not nearly enough for my tastes, though it may appeal to a wider range of drinkers. I’ll be very curious to see how accurate I am on the IBU count. 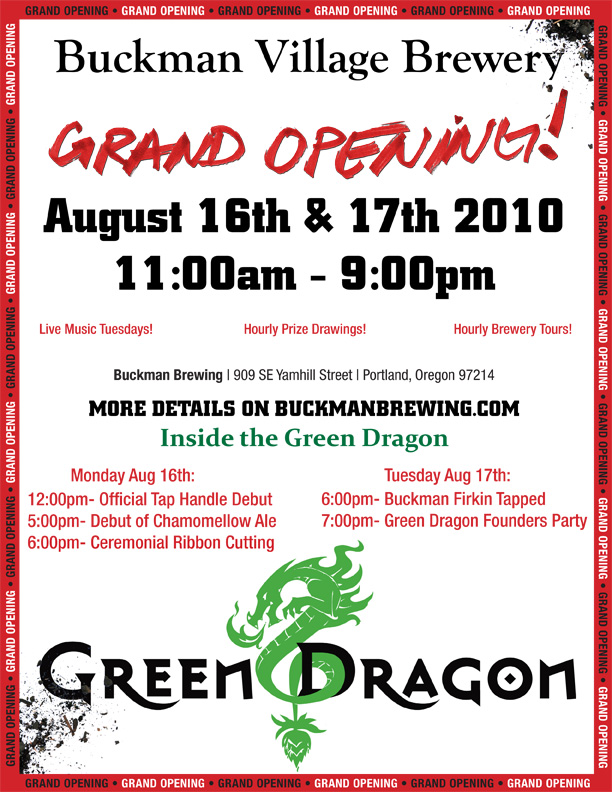 Again, a very pleasant-tasting beer, even though it lacks just a little bit of that clean, fresh, explosive bitterness that my favorite IPAs hit you with on the way down the pipes. My guess is that the brewer will tinker with it in the next few months and probably come up with an approach that resolves that issue.

The Buckman Ginger was a ginger beer that was surprisingly and enjoyably subtle. Some ginger beers overwhelm and while they might be tolerable in a three ounce taster, they become undrinkable about halfway though a pint. This beer, about the same color as the IPA, had just a faint hint of ginger, and was very well-balanced, down to the last drop in the pint. I’ll have to return and try another pint – to get a firmer handle on it – but my initial impression was a positive one, surprisingly, as I’d been prepared to bypass the beer entirely. After the enticement of the free taster, I subsequently tried the full pint and enjoyed it.

The Buckman Chamomile was similarly subtle, with only a faint hint of the flower’s presence. I spoke with one woman who was drinking the beer, and she strongly believed that the beer had been brewed with honey. Not true, according to the brewer. No honey was used. Instead, he stated, he’d used a very fresh variety of the flower, using only its essence – he described using only the core of the flower, not the petals -and then adding it only at the very end of the process. The result was a light golden ale, with a sweet finish that fortunately did not have that perfume-like smell and taste that taint some herb-flavored beers. The flower itself gave the ale its delicate, honey-like sweetness. As was the case with the Buckman Ginger, the chamomile’s subtle sweetness makes this a beer that you probably won’t abandon halfway through a pint, and it will go down smoothly and nicely on hot summer days.

All in all, a very nice beginning for a brewery that has taken a long time – literally years – to get up and running. All three beers are good beers, and simply need a bit of refining in order for them to improve greatly. None of the three evoked that urge to simply toss the bulk of a sample or a pint, which is admirable enough for a brand new brewery. I’m sure the brewer will continue to tweak the beers over the next few months and eventually dial in a series of solid recipes that will reflect well on the Dragon, er… the Buckman Brewery.

Now, I’m looking forward to the hemp seed ale the brewer is currently working on. From the description he provided, it should be a fine addition to their line-up of beers, and I’ll look forward to seeing it on tap and featured.

Brewpublic welcomes Frank James to our lineup of beer geek contributors. Frank brings a wealth of craft beer knowledge to us from his journeys around the country and the globe. You’ve probably seen him at a beer fest or craft beer bar around town since he’s been keeping his finger on the pulse of tasty malted brews since his early days in the Midwest. We look forward to sharing more of Frank’s words within the paper-free pages of Brewpublic in the near future. For more on Frank and his background, check out his bio on our About page. Prost!