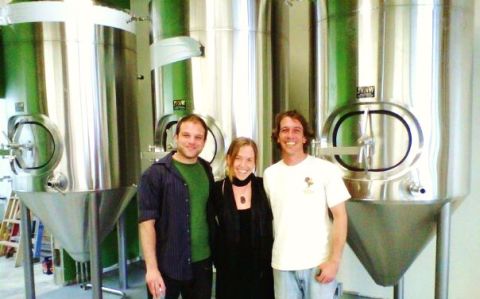 Not too long ago, while walking through Southeast Portland, we noticed some folks working at a soon to be storefront that we’d heard was the future home of Coalition Brewing. After briefly chatting with these friendly folks, we learned that this long anticipated brewpub was actually about to begin production of their beers.

For over a year, the Portland craft beer community has been purporting that Coalition, initially slated to be named Hobo Brewing, would soon be opening. Like so many start-up brewhouses, Coalition experienced a number of hurdles and red tape that slowed their progress including a lawsuit over the name Hobo and logistical setbacks. Finally, the taproom at SE Ankeny between 27th and 28th Avenues is so close to opening, you can literally smell it. Well, actually, that would be the brewing facility across the street where co-founder Elan Walsky and head brewer Bruce MacPhee, formerly of Deschutes Brewing, have already began brewing three house brews. 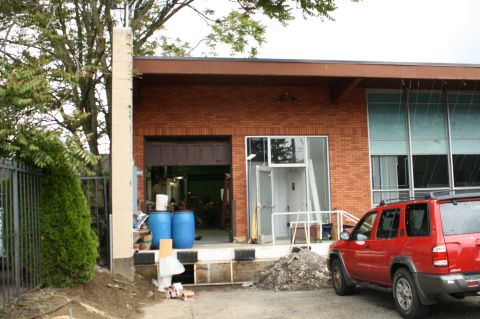 Coalition Brewing is the brainchild of Walsky and his partner Kiley Hoyt. Both students of Siebel Institute of Technology and members of the Oregon Brew Crew, and with a breadth of homebrewing experience, aligned their passion for brewing while Walsky was working at F.H. Steinbart Company‘s brewing supply and Hoyt was seeking out a pilot system for what was to be Hobo Brewing. Last week, we had the opportunity to visit with Walsky and MacPhee amidst the brewing of their first batch of Coalition Pale Ale. The beautiful brewhouse was recently fabricated by J.V. Northwest and other folks recommended by Upright Brewing‘s Alex Ganum. In fact, the set-up and aesthetic of Coalition’s 1,440 square-foot, 15-barrel facility is much the same as at that of Upright.

Here’s our interview with the Elan Walsky and Bruce MacPhee. 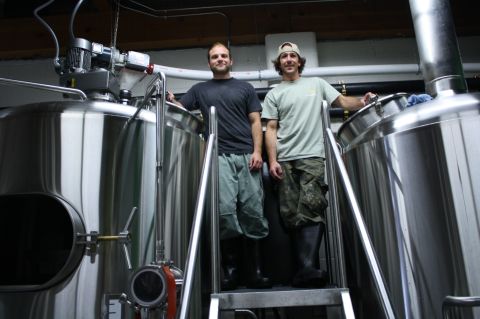 How long has Coalition been in the works?

Elan Walsky: We formulated the idea about 14 or 15 months ago. About a year ago we got into our pub location right across the way. At the time, we thought we were going to have the brewery there, up on the second floor, but it ended up not working so we went through lots of draft plans. First, we thought we’d have a three-barrel (brew system) back there. Then we thought we’d have to go with a Tuff Shed out back. Then, luckily in the nick of time, this place opened up. We did a complete build-out. There was a call center in here before. 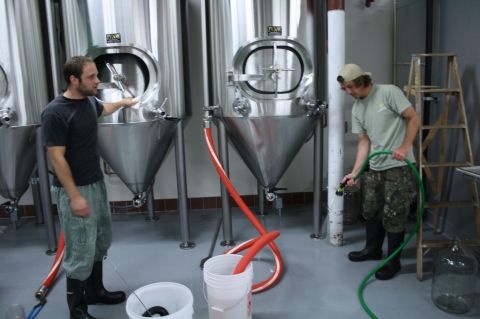 When was the brewery installed?

EW: Three weeks ago. But we had to do start-up and plumb all the glycol in. We just brewed for the first time yesterday (May 19), and actually nailed our numbers and everything. 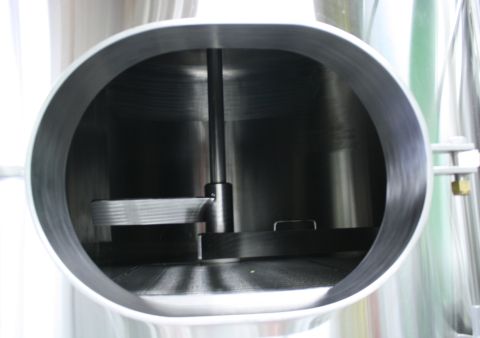 What was your first beer brewed?

EW: It’s a pale ale. We’re shooting for a traditional take on the style…a  little bit heading away from the huge hop bombs and the really really huge big beers. More beers with a balance. We’re going to have really good beers.

We first met you at F.H. Steinbart’s brewing supply shop. What got you into craft beer initially? 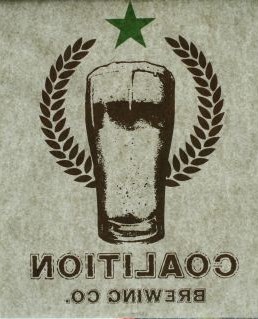 EW: Before Steinbarts, I was working selling insurance, and that was a terrible nightmare. So, I basically started brewing as a hobby to stay sane. I just got way way into it. One day, I was at Steinbart’s getting ingredients, and I overheard Jeremy (Morton-Maxon) and John (De Benedetti) talking about needing help. So, I went up and told them I was the guy they were looking for and somehow got the job. I obviously learned a lot there. And I took some classes through Siebel (Institute of Technology). Kiley (Hoyt) was also a Siebel’s student. She came into Steinbart’s to look for her pilot system and had already started the LLC for Hobo Brewing. That’s how we met. It was a funny coincidence, because we got to talking and I told her it was my long-term goal to open a brewery. She was like “Cool. What do you want to call it?” And I said “I want to call it Hobo Brewing.” She was like “Shut the fuck up. I just started a brewery called Hobo Brewing.” Anyway, we got to working together and just started brew-out. We meant to be a production facility originally, but then we stumbled across this location, and we really didn’t want to pass it up. We’re the first tennants. 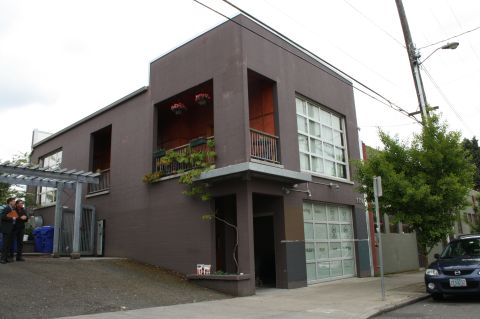 How did you get Bruce (MacPhee) brewing here for you?

EW: We got recommended by a mutual friend. He’s friends with some fellows who work down at Widmer and they were friends with a kid who was helping us out. They recommended Bruce, we met, then there it was.

Bruce, you used to work at Deschutes Brewing in Bend. How did you end up at this small start-up brewery?

Bruce MacPhee: More or less, I was looking for a way out. I was trying to get into the Deschutes Pub’s downtown (Portland) location. I was their assistant there for a year. They knew I wanted to get out. I was seeing a girl over here that I was getting ready to marry. We were kind of beating around the bush and I didn’t want to deal with it any more. So, I was looking to leave and find something. I wasn’t sure if I was going to brew any more. Of course, I wanted to. I couldn’t big boy brew any more. I wanted to see the beer, feel the beer, not hit a “start” button and watch the beer being made. It just so happened, like (Elan) said, through friends of friends, word got out; I was on graveyard (shift) at the time, and Kiley, Elan, and I started passing emails back and forth. The 150-barrel brew system (at Deschutes) was all automated. Once you hit “start”, you’re just sitting around making sure valves open. The email chain started, we met, and it worked out great. (Elan and Kiley) had a great idea. I’m not super familiar with the Portland area, especially (the East) side. More of my time here has been spent on the business side (West Side). I was jumping for joy. It’s a small brewer’s dream to get away from a non-touch system and get fully back in it. 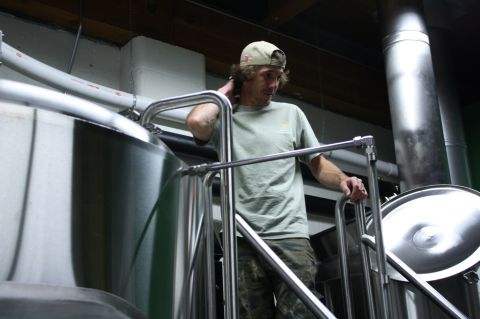 What other styles of beer are you planning on making?

BM: We’ll do a bitter tomorrow and a red. Then our tanks will be full and we’ll turn those out. Then we’ll refill it and do a stout, maple porter, a cream ale, and an IPA. We’re pretty much everywhere. During crunch time, we’re not going to have the option to throw a lager out there. Of course, we want one. Opening during summer, it’s hard to hold back a tank for two months while we wait.

When are people going to have the first opportunity to taste your beers?

EW: We actually just decided last night-you might be breaking this, other than our Facebook page-we’re going to open 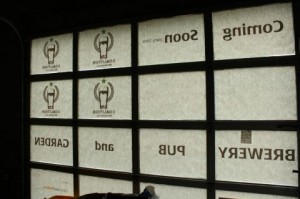 What kind of food options can people expect from your taproom.

EW: We made a decision not to put in a fryer. So it’s not going to be super traditional pub food. It’s pretty simple pub food in general, but we wanted to show that it doesn’t have to be burgers and fries to pair well with beer. With that in mind, we’ll focus on having a nice big panini menu and a bunch of little items like corn fritters with an arugula pesto, these things called meat muffins. (Meat muffins) are basically little meat loafs shaped in miniature muffin form and they’re on top of a plate of pancakes drizzled with a stout gravy. We’re trying to make a lot of things from our beer and from our wort. Our friend Lucas (J. Daniels) is a very talented and creative cook. It’s going to be simple but done in a nice way. I don’t think we’ll have anything above $9 on our menu. 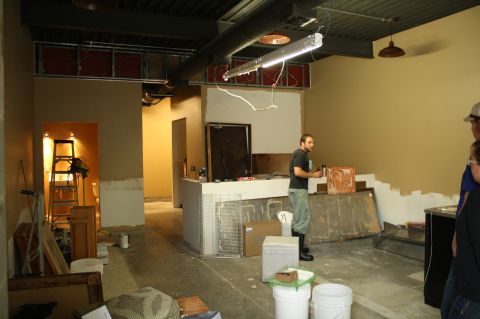 Being members of the Oregon Brew Crew makes Walsky and Hoyt quite appreciative in homebrewing. In fact, the two are working with homebrewers to develop small batch beers into commercial available realities.

EW: We’re having homebrewers come into the brewery with us. If they have a recipe they want to brew, we’ll brew that with them. If not, we’ll go through a recipe design with them. We’ll brew these beers on our pilot system and actually throw those on tap at the pub. So, it will be a quickly rotating homebrewers’ tap. Once we get enough of those out, we’ll have our patrons vote for which one they want to see as a regular rotator, and have that guy back to blow it up on the big system here.

You must have been quite anxious to get thing off the ground.

EW: Oh man! We were originally shooting to be open last October, then were like, “okay, January…okay, March…okay May.” Now we’re set on June 23.

Coalition Brewing is located at 2728 SE Ankeny in Portland, Oregon. We anticipate their grand opening scheduled for June 23, 2010.