The best part about making the journey home on a beer roadtrip from San Francisco is having some stellar brewpubs to visit on the “return flight.” California’s capital city, Sacramento is not the first place that comes to mind when devising a California beer venture, but overlooking it could prove to be a grave error.

Rubicon Brewing Company in Midtown has been producing some of the best beers in Northern California for over twenty years.  About 50 miles east of San Francisco near the I-80 and I-5 interchange, we arrived with our friend Erik who was to catch a bus back to his home in the Bay while we headed on North towards our home in Portland.

Close to the Capital Building where a huge Measure 8 equal rights protest was underway, Rubicon is situated in a hip part of the city with vibrant storefronts, cafes, and on streets filled with fruit trees.  The initial impression of the brewpub was positive – clean, tidy, and welcoming.  This would prove to be the case as we met our hospitable barkeep, Brenda.  The  young lady was not only amiable, but knowledgeable.  She poured us a colorful sample tray of nine house beers and two ciders from Two Rivers, a cidery started by former Rubicon publican Vincent Sterne.

India Pale Ale: 6.5% ABV with a copper-orange body and a small white head.  Fruity floral bouquet from Cascade and Chinook hops.  Well balanced, and not harsh for theh style.

Stout: A dry Irish style clocking in at a mild 4.8% ABV.  East Kent Goldings tingle in this nitrogenated, fluffy dark brown offering.  Nutty, creamy residuals linger in the mouthfeel leaving hints of dry chocolate and coffee.  It is easy to taste why this stout was awarded a bronze at the GABF. More sips revealed a mildly smoky, crisp malt underpinning.

Monkey Knife Fight: An easy drinking 4.5% ABV Pale Ale.  Pale golden bodied with a pillowy white head.  Grainy, biscuit malt spine with a lager like crispness.  This beer would be perfect on a hot summer’s day. 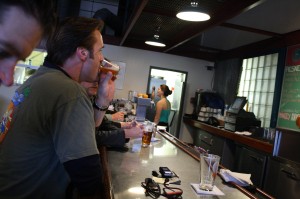 Rosebud: Like Citizen Kane, this Strong Ale is a focus point in the sampler tray.  A sticky caramel nose luminated a dark chestnut-amber bodied brew.  At 6.9% ABV, this big dog is quite smooth and utterly refreshing.

Winter Wheat Wine: Breweries that make wheat wines get extra points in my opinion.  Most often those who make this style of beer, are imaginative and skilled at making a plethora of styles.  This proved true for Rubicon.  A balmy 10.6% ABV, the WWW was awarded a 2008 World Beer gold medal as well as a 2006 GABF gold.  A boozy, caramel, candied and thick bodied brew, this one was laden with sugary thick malt goodness.  Hot damn!

Hop Sauce: A Rubicon favorite, this double IPA (8.9% ABV!) emitted a massive floral hops nose from its unassuming pale amber body.  Rich hop and malt textured marry to unveil one of the best imperial IPAs we’ve had the pleasure of invading our palates with.  A growler to go, please. 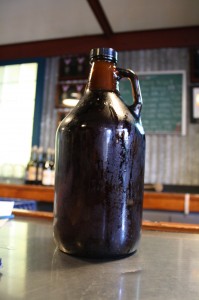 After our beer samples we enjoyed Pommegranite and Apple ciders.  The Pommegranite was a light, tart ruby-garnet colored cider with a bubbly, fruity, apple and grape crispy smoothness.  The Apple was a vinous, white wine-like cider with a white-straw body and a very dry, tannin-filled finish.

We chatted a bit with Brenda, who we really enjoyed meeting.  Afterward, we dropped Erik off at the Greyhound Station where protesters disbanded from the rally.

Rubicon left a great taste in our mouths. We hope to return again soon and spend more time in the presence of friendly folks and flavorful brews.