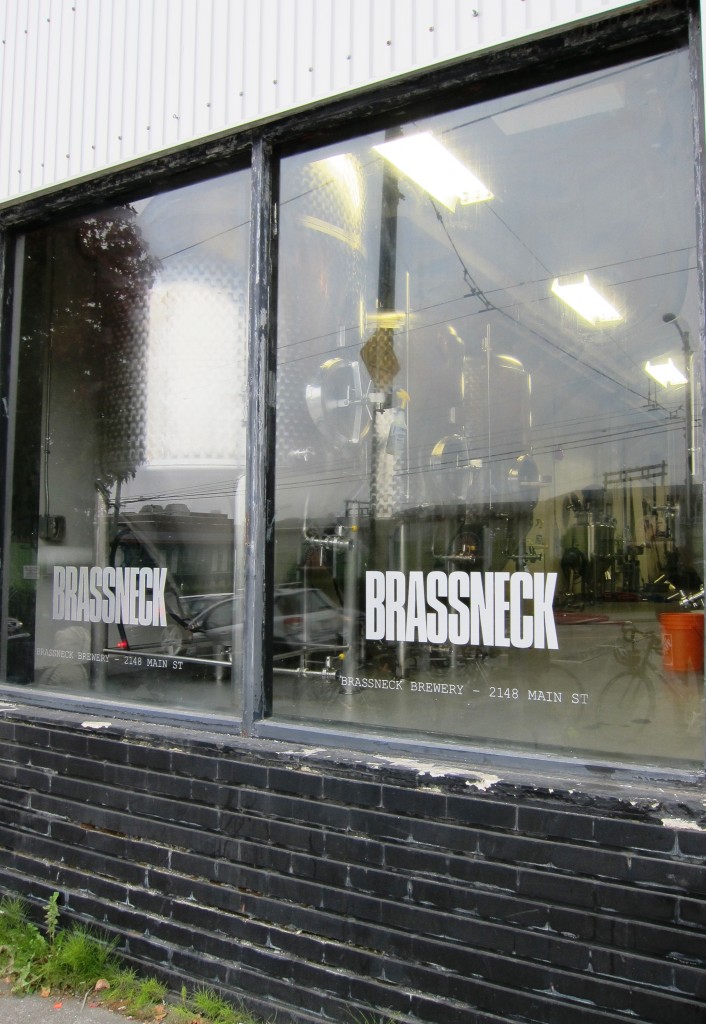 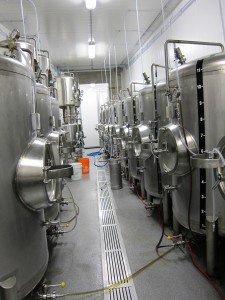 On my recent pilgrimage back to the city I stopped to try another new Vancouver (British Columbia) beer hot spot, Brassneck Brewery, which just happens to be the progeny of some serious local beer pedigree, Nigel Springthorpe (of The Alibi Room) and Conrad Gsomer (former brewer at Steamworks).

Brassneck is located on Main Street just north of many great food spots, quirky used book stores, trendy coffee shops and local clothing merchants, in other words in a pretty great neighbourhood. The brewery, growler fill station and tasting room are housed in a rather nondescript building but it has a big glass front allowing people the chance to see the brewers in action and to see the depth of the line-up at the growler fill counter. Barely open two weeks when I stopped by, the hubby and I just squeezed into the seating area under the max capacity allowance. 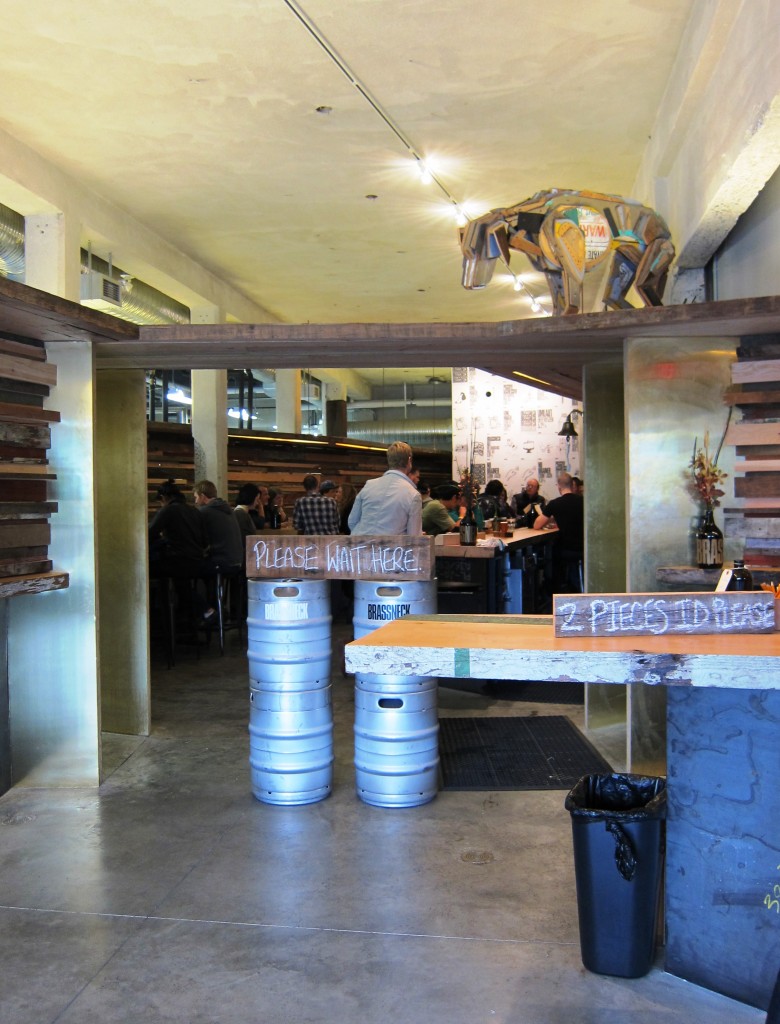 The long narrow tasting room is, well, woody, which for some reason seems to be the decor choice of many a brewery. A giant communal table extends from the end of the bar and the other half of the room has equally cozy tables where drinking with your neighbour is somewhat unavoidable – the exception being one table tucked away at the back for secret meetings and brewery espionage (I presume). Little cutout windows afford patrons a view behind the scenes. The aesthetic here seems to be studied quirkiness (very Main Street) with pen and ink sketches for the beer ‘labels’, underwear branded with the brewery name and, of course, a food truck parked in front – oh, and a grain sack for a garbage. Behind the scenes it looks like most breweries lots of stainless steel, plastic bucks and an endless nest of hoses running here and there.

They have a lot on tap for a new brewery, ten beers in fact. Oddly though the taster flights come in fours so this begs the inevitable question what to leave out? I decided to let the guy pulling the taps make that decision for me so I would not discriminate uninformedly (not sure this is a real word). One other thing that seemed like an ‘ironing out the kinks’ kind of issue is that there is no means to differentiate the beers in your flight other than the whirlwind recount from your server. So when you are forgetful like me (or you’ve had one too many beers) this lack of labeling makes it hard to remember what is what and I noticed more than one beer geek (myself included) with the beer order jotted down on a scrap of paper.

While we were at Brassneck we tried:

Small Wonder – A table saison meaning a light and accessible drink to be shared. Light pale gold gold in colour, just a little head and the tiniest bit of funkiness to remind you that this is indeed a saison style brew. A good starter beer.

Kingmaker – A clear golden coloured pils with a light skim of head. A slight yeasty nose and a bit of nutty flavour, which is pretty typical for the style. An okay beer but I wasn’t loving it.

Brassneck Ale – Moving along the colour chart we have a clear light amber ale. A little bit more flavour and depth that the first two beers. Some toasted elements, a hint of bitter and a bit of a coppery taste. 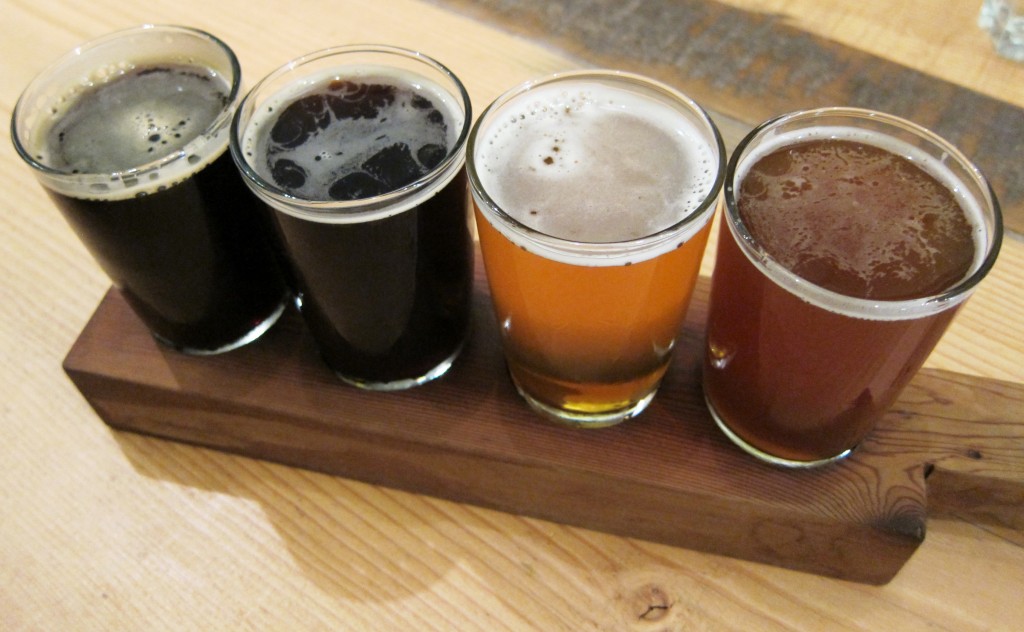 Blichmann’s Finger – We are now onto the golden ale, which in appearance is pretty close to the Brassneck, perhaps a bit darker in colour. Hoppy on the nose and in flavour with equal parts maltiness.

Passive Aggressive – Bright cloudy orange pale ale with nice lacing. Big floral hop nose with some piney notes. Lots of sweet malt flavour and even more hoppiness as you drink -perhaps more IPA than pale ale. Dry bitter finish. This one is the best of the bunch so far.

Barn Burner – Dark black-brown with some mocha coloured head. This dark saison has a sweet and funky nose, nice roasted malt and leather flavours and a dry finish. 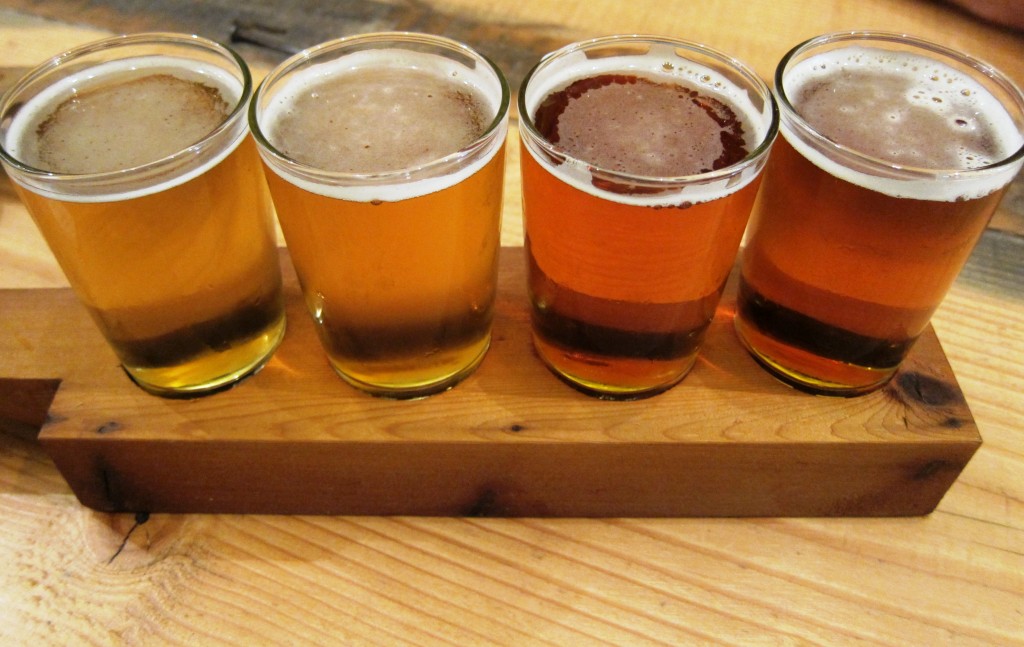 The Geezer – Last but not least the porter. A dark black-brown beer with mocha coloured head. Chocolate and roastiness on the nose, lots of roasted malt flavour. Chocolate is dominant, coffee notes very slight, making this porter not too bitter but it is quite thin. Dry finish.

Check out more from Sara Hancock and her British Columbia beer adventures on her main blog The Parting Glass here. You can also follow her on Twitter here. And yes, they add the letter “u” to certain words up there.