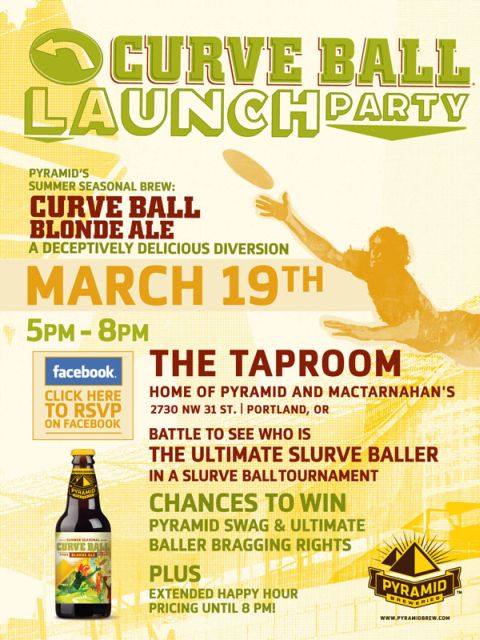 March 19, 2010 marks the release of Pyramid’s Curve Ball. This means that baseball season, and yes, spring is just a few days away. This beer that used to be dubbed a Kolsch-style beer and now is pitched as a golden ale is one of the most delicious summer session beers out of the Northwest. It’s also one of the best beer Pyramid has period.

Says Mike Brown, Commissioner of Inspiration and Aspiration for Pyramid Breweries (what ever that means) “Curve Ball is a classic representation of a quality craft beer embodying the season in which it’s poured. From the first sip of the season, all the way into summer’s prime – this deceptively delicious beer delivers on full-flavor while providing the perfect companion to all warm weather festivities.”

A few questions to the marketing team at Pyramid:

Why do you say this beer is “deceptively drinkable”? We can see how an imperial with well-hidden alcohol might be deceptive, but after all, there really doesn’t seem to be anything deceptive about  5% ABV, “a crisp, clean-tasting, cold lagered ale.” How is anyone being deceived? Do they think it’s a lager and they’re getting an ale? We guess we can see that.

When are you going to ditch your god awful labels? Hideous. Bring back the traditional ones where Curve Ball had a baseball theme on it. Please, please, please get rid or those. The sanctity of baseball is dissed by this grotesque display. Also, are you unaware that your Seattle taproom is across the street from Safeco Park home of the Seattle Mariners BASEBALL TEAM!  Granted there are a few silhouettes of baseball players jumping on the edge of the label, but a curve ball is a type of pitch, not a type of catch.   We’ve said it before and we’ll reiterate: this is energy drink-esque crap. Okay, that’s the last we’ll mention it…maybe…

To your credit Pyramid, you have kept this wonderful beer, Curve Ball, through all of your tribulations. It is certainly a beer that hits it out of the park!